During the last SLC Dunk podcast a really amazing, mind blowing topic came up. No, I'm not taking about trading for Rajon Rondo . . . . I'm talking about the whole Carlos Boozer / Al Jefferson trade. (Check out the podcast here, if you missed it!) At the time I think a lot of us were happy to be getting some sort of compensation for "losing" our Boozer. Others just were happy to move on. Let's not forget that while Boozer was a dependable rebounder and scorer -- he shriveled in the playoffs, never blocked shots, and his defense was apathetic. By a direct comparison, understudy Paul Millsap was the opposite of those three traits. Adding in Jefferson (and his bloated contract) was not supposed to hurt that much because overall the team was supposed to be much better with Paul starting.

Still . . . we just finished up our first full season of Al Jefferson, his 8th in the league. Is he, right now, better than what we had with Carlos Boozer in his 8th season? Are they both bad? Both good? Good but in different ways? Both overpaid? Or really really similar . . . ? Strapping down KOC and asking him under truth serum about this is one way to get to the bottom of it. Another way is to visit Basketball-Reference and do the work yourself. Because of the restraining order, clearly, only one option was available to me. Check it out after the jump . . . 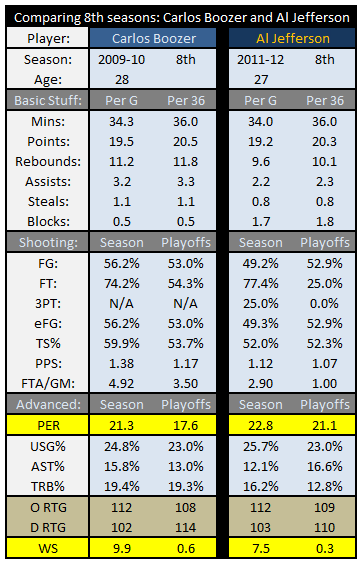 It seems like, outside of a few things we already knew (Boozer doesn't block shots, but he shoots a great fg%; Big Al isn't much for the passing or getting to the line, but he was somewhat effective in the playoffs), there was little to be found here.

Both players sucked at FT shooting in the playoffs. Both guys, normally (in the regular season) are good FT shooters for big men. Carlos seems like the better player on paper, but he benefited from playing with better team mates in a better system. Big Al actually plays in the paint, and doesn't take jump shots all day.

After your 8th year in the league how much better are you actually capable of getting? This is an honest question, because I don't know the answer. I think neither of them are ever going to be good defenders. Boozer gets steals. Big Al was really good at blocks. Boozer never got blocks. Big Al was about average with steals though.

Who had a better season? Who is better?

Does it matter? I think we lost efficiency going to Big Al, but we gained a legit 'by himself' post presence. This entire investigation seems like an exercise in "tell me something I don't already know". Their 8th seasons in the league they were both almost 20-10 guys. Only one of them was a legit double double guy. Both had regular season PER values in the low 20s. I fail to understand how a jump shooter like Boozer got to the line more than a post player in Jefferson. But that's just another of the many mysteries of the universe . . .

Would you do it again?

Carlos made less than Big Al last season. But his contract is for way longer. Both guys make $15 million this '12/13 season. But Boozer's contract tops out around $16.8 million 3 seasons from now. Boozer is older. Did worse in the playoffs. And was the known quantity. Maybe if we paid to keep Boozer we'd still have Deron Williams? We'd still be contenders today, not a fringe playoff team. But I don't think we'd be serious threats. Boozer's defense did not get better. Big Al, as the unknown did come in, and did do things differently. His contract expires this season. And at the very least. he was a good crutch to lean on during a transition period of Jazz history.

Would I do it again? Personally no . . . because I'm a crazy person though. I would have had Andrei Kirilenko as the starting SF and back up PF playing 37 mpg, and have the team run a lot in Deron's last year here.