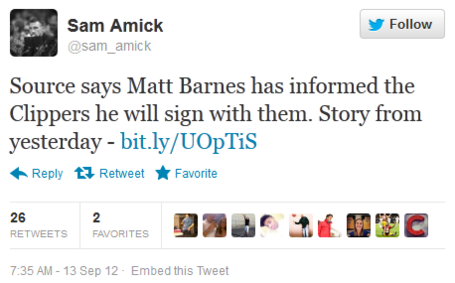 So that's great. Matt Barnes stays in the Western Conference, playing for the Los Angeles Clippers, who seem to collect guys I'm not very fond of (Lamar Odom, Caron Butler, etc). I'm not worried about the Clippers being a potential dynasty, but this move brought to mind those over-rated "Dubs" teams of that one, flash-in-the-pan season for the media and fan adored Golden State Warriors. Remember that Baron Davis dunk? That must have been worth 3 wins right there!

God, I detested that team. And a lot of it had to do with their players - Matt Barnes being a principal character. Remember his thug take down of Mehmet Okur when they knew they were eliminated, and lost it on their home floor in Game 4? (They'd lose the series in Game 5, but they really lost it in Game 4 when they didn't hold their serve against the Utah Jazz) I can honestly say that I HATE Matt Barnes. His wanna-be thug look. His on-court snarls. His potentially Hepatitis C motivated fouls. Can't stand the guy. I guess there are a bunch of guys in the NBA I just hate. Blake Griffin 's media exposure kind of makes me hate him too, with his stare downs and flopping. (How can you be a tough guy who flops?) Dirk Nowitzki seems like a genuine guy, but can't like him for his flagrant foul that injured Andrei Kirilenko. DeMarcus Cousins thinks it's PG hunting season when he plays us. Carmelo Anthony is the poster child for the wrong attitude to have as a player, or a grown man. I didn't like a number of those nuggets guys, Chris Andersen -- and Kenyon Martin (remember his flagrant foul of Karl Malone when he was on the Nets?), who loved to publicly expose himself. I could go on and on till the 1980s with players I disliked. Who are some of yours?

I'm kinda expecting some Delonte West haters in our readership . . .