Getting Defensive About the Upcoming Season - The Downbeat #839

Share All sharing options for: Getting Defensive About the Upcoming Season - The Downbeat #839

If the Jazz are going to become a much better team and eventually contenders, I think we can all agree that the team needs to improve defensively. Depending on which statistical database you use, the Jazz fall in the lowest 10 or 11 teams in overall defense. Basketball-reference, who I will solely use today for consistency sake, had the Jazz as the 19th best defense last year giving up 106.1 points per 100 possessions. I have yet to find a database that can manipulate the numbers in order to make the Jazz look great defensively last season. Keeping my fingers crossed.

Trivia question of the day: In the last 10 seasons, which NBA championship team was the worst defensive team of the 6 past champions?

As Jazz fans, we have a lot of hope that giving Gordon Hayward, Alec Burks, Enes Kanter and especially Derrick Favors a lot of time on the floor in the future will improve the defense of the team. For now, all we can say is that the best defensive team any of these guys has played on in the NBA, is the Jazz team from last year. But what about the other 4 main contributors of the Jazz's success this season? What is their team defensive profiles?

Paul Millsap- As a career long Jazz man, Millsap has never been a part of an elite defensive team and has mostly been on average to poor defensive teams. His team's best showing was the 2009-10 team that allowed 105 points per 100 possessions and was the 10th best defensive NBA team. Millsap played 28 minutes a night for that team. 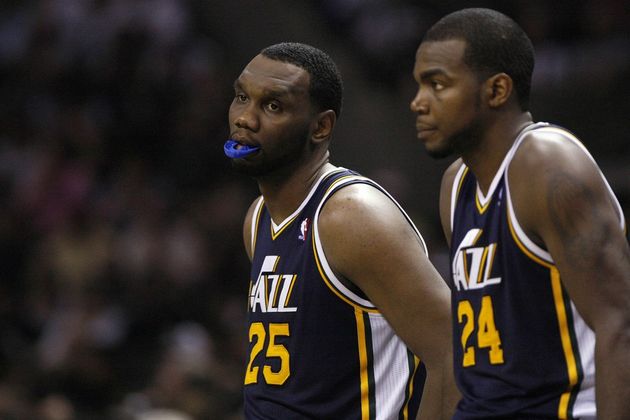 I've been listening to a lot of TED talks lately, for reasons that are too uninteresting to explain. Dan Gilbert, no not that Dan Gilbert, gave an interesting lecture on happiness and more specifically, how humans create happiness. His studies suggest that one way humans convince themselves to be happy, is by immediately overvaluing something we acquire, or conversely, devaluing something that we lose. What does that have to do with the NBA? A lot actually. Immediately I thought of this tweet from a prominent Nets fan on Twitter:

He has synthesized happiness, by believing that Derrick Favors, a player his team traded away, is not really a top 90 player in the league, even though Favors is clearly a top 10-20 defensive player in the NBA and will probably jump up several spots over the course of the next season. There are also several ways that Jazz fans have synthesized happiness in this manner. Raise your hand if you argued tooth and nail that Deron Williams was the best point guard in the league 3 or 4 years ago, and then ranked him sometimes as the 4th or 5th best point guard as soon as he was traded to New Jersey?

What are some other ways you can think of that Jazz fans synthesize happiness in regards to the team?

David Locke mentioned in one of his tip-offs this last week, that he had breakfast with new GM Dennis Lindsey and talked with him about the state of the team. According to Locke, Lindsey asked him what questions the Jazz fans were most interested in generally. Locke's answer was the future of the point guard position and the Jefferson or Millsap question. Obviously we already know that the answer to the point guard question is Myck Kabongo, but hopefully we get an answer to the second question in the next 12 months. Here is the prediction of that question from Hardwood Paroxysm's Matt Moore in his reader's mailbag:

Jazz need to trade millsap or Jefferson (or both). Who would you trade, for whom or what, and when?
-Blake Kohler

I want them to trade Millsap, but that’s just because I want to see sub-superstars in different settings. I feel the same way about Josh Smith and LaMarcus Aldridge. But they need to trade Jefferson. I don’t like Al at center. I want him at power forward with a legit five next to him. Honestly, he’d make for a great pair with Hibbert after David West’s skills erode with time. If I’m the Jazz, I’d do the same thing I’d do if I were several teams:
1. Hire a three-man team of metric-analysts from a diverse set of analytic backgrounds
2. Charge them with working for three months non-stop, working 12-hour days on developing one formula: Which teams have the best probability at this moment of having a top-ten, not top-five, not lottery, but a top-ten pick in the draft that Andrew Wiggins will be available in (if his eligibility is decided by the trade deadline). Then I would trade Jefferson and Hayward and Mo Williams to any of those teams that will listen for those picks. I would sell out everything to set them up to get Wiggins.

In reality, they will likely re-sign Millsap and let Jefferson walk or trade him for a small combination package.

I also included this quote for the terrific, yet unintentional, Ender's Game allusion.

We have caption contests, but I want to have a contest to determine who can most cleverly explain this tweet from Gordon Hayward. I can only imagine that it has to do with the World of Warcraft, but that isn't the explanation that I want to hear.