One of the offensive metrics I keep track of is Points per Shot (PPS). It's a very simple formula to figure out, total points scored over total field goal attempts. So if Kobe Bryant scores 30 points, but needs 31 shots to get there (like he did in the March 7th, 2012 Lakers loss to the Wizards last season) we can see that: a) yes, Kobe scores a lot; but also, b) he was highly inefficient in doing so. So for that game The Mamba had a 0.97 PPS value. Which is, obviously, lower than the 1:1 ratio / Maginot line. Of course, that was just a bad shooting game. Kobe, for his career, is a 1.30 PPS player. That's a great number for a guard. Karl Malone's career PPS is 1.41. LeBron James' career PPS is 1.36. Kareem Abdul-Jabbar's is 1.36 as well. Good scorers have high PPS values. Especially if you are crazy enough to find the frame of reference for them. Back when I first "discovered" PPS (back before I didn't know it was a real thing, and I was calling it "Shot Worth" because I didn't know anything outside of my basement cave) I did a 20 year study on what the "average" SW was. I found that it was PPS 1.22.

Well, that was a few years ago so now I had to do a new study. And well . . . I had to downgrade the baseline league average for PPS. Over the last decade (a smaller n value, but more recent data, so more accurate for "todays" game) it got smaller. It's now 1.21. I totally feel like Ben Bernake here. To see SOME of the data, and where the Jazz rank, check this all out after the jump.

As you can imagine, calculating EVERY SHOT for every player on every team for a decade is both tedious and thankless work . . . I'm saving you all the de-humifying experience of seeing all of the numbers. Instead I've made this handy chart and table set that shows how things have gone over time. 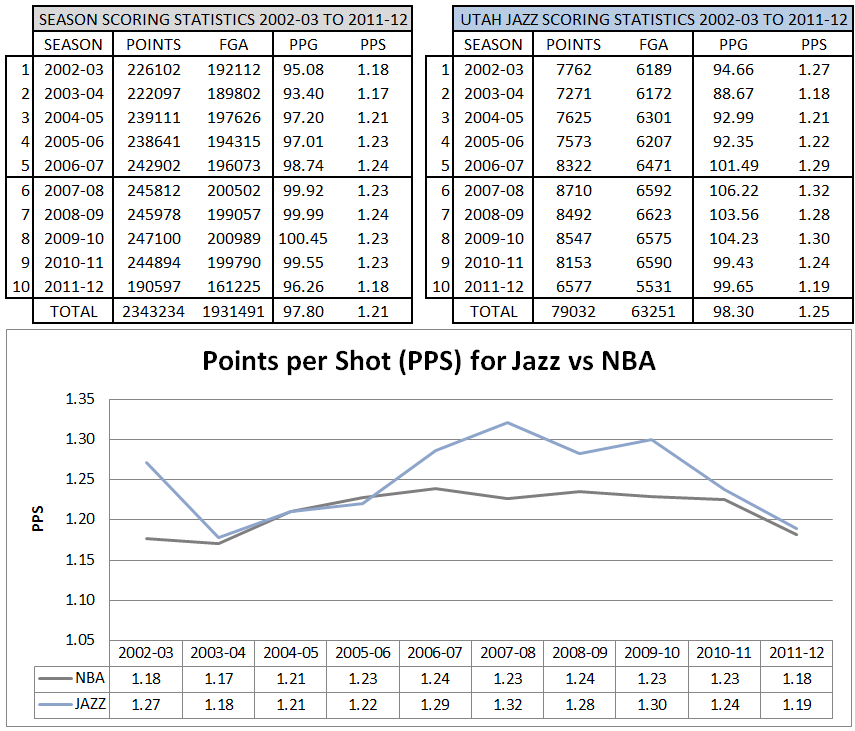 Last season teams' shots did not go as far as they used to. I don't mean like a Devin Harris memorial airballed three (not going to miss that part of his game). I mean that the PPS values were lower. Each shot was worth less. Looking at the larger picture of where the normal value was 1.22, a 2011'12 value of 1.18 is quite a few points down. (Just think about all the extra shots missed that you'd need in a 400 player league to make a 0.04 point decrease) It's still bad against a 1.21 PPS average. It's particularly bad when you look at the other apples to apples comparison of the NBA's average PPS value for the other shots within the last 5 seasons. The NBA had become a more efficient league. The NBA was boasting PPS values of 1.23 and 1.24 . . . and then last season it crashed to 1.18. Thanks, Lockout.

Hopefully last season was an anomaly, as last season the Utah Jazz also shot less efficiently. The Jazz, for the last decade (and let's be honest, for probably the last 30 years thanks to Stockton and Malone) have been way ahead of league average when it comes to efficient offense. The PPS for Utah took a steep drop the year after Stockton retired, and climbed back up to respectability when the team started to play "Jazz basketball" on offense. Of course, when Al Jefferson arrived our PPS value seemed to dip again. Maybe it was not having a strong PG to dominate our offense? I don't know. Let's not point fingers here.

The Jazz are known for: being unpopular, and fouling a lot. Previous Jazz teams were also known for toughness, borderline dirty play, and scoring efficiency. For the most part I think our team is made up of pussycats, so I don't see toughness returning anytime soon. For our sake, I hope scoring efficiency does - and verified by a team PPS value of 1.20 or higher next year.