Share All sharing options for: Five Crazy Predictions for the Jazz: The Fake Bleacher Report Downbeat #840

The First Road Will Be the Roughest: With games at Oklahoma City and road trips to Memphis and San Antonio and along the East Coast, the first 20 games hold some difficult contests. The Jazz made some nice offseason acquisitions in Mo and Marvin Williams, and Randy Foye, but it will take some time to implement them into Utah's complex offensive and defensive systems. Don't be surprised to see the Jazz start 10-10 this upcoming season. 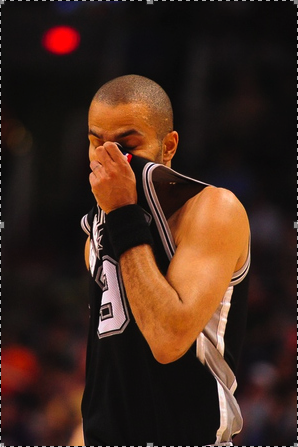 Will Tony Parker and The Spurs have the Utah Jazz blowing their collective noses in their jerseys to start the season? Mandatory Credit: Mark J. Rebilas-US PRESSWIRE

The Jazz Will Face Other Challenges: I'm not a fortune teller, but if I were, I would be betting in Vegas instead of writing basketball blogs. But I have a feeling that the Jazz suffer another difficult test early in the season in the form of an injury. I'm not wishing ill will, I'm just imagining that the law of averages will catch up with the Jazz. It won't be a serious injury, but one that will keep one of the top 6 guys on the team out of the lineup for about a month.

The Trade Deadline Will Come and Go Without a Roar: This Jazz team will be deep. Much like the previous season, they will have 8-10 guys of relatively equal ability. This will make it difficult to trade for a player who is a big talent upgrade, but will also allow them to fill any gaps with the next player on the depth chart, if need be. Both Paul Millsap and Al Jefferson will finish the year on the team. 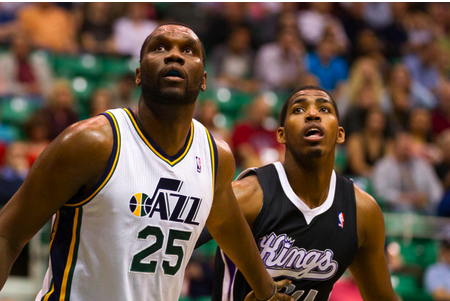 It's a Bird. It's a Plane. No, it's just the trade deadline coming and then going. You're staying BIg Al. Jason Thompson, you just got traded to the Bobcats. Sorry, man. Mandatory Credit: Russ Isabella-US PRESSWIRE

Jeremy Evans Will Repeat as Slam Dunk Participant, but Not Champion: I could spend a paragraph writing about the details of this prediction, but I think that one sentence is pretty self-explanatory. But for those of you who need clarification, I believe Jeremy Evans will defend his slam dunk title, but not win the contest again.

The Jazz Will Sneak Into the Playoffs: The Jazz are one of the three or four teams that will be vying for the last 2 or 3 spots in the playoffs this season. It will come down to the very last week and perhaps the very last game again, but the Jazz will claim one of the last spots to qualify for the playoffs. After all, it's what the Jazz do. 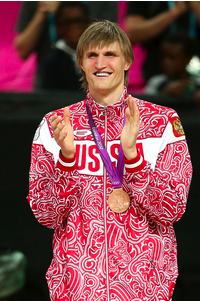 Sorry Andrei and other Timberwolves, but the Jazz are bumping you from the playoff picture this season. Also, sorry you had to wear that jacket during the olympics. (Photo by Streeter Lecka/Getty Images)