A culture, in layman's terms (my terms, I'm not a sociologist or anthropologist), seems to be an encouragement of a particular system of social norms and mores. These can be related to an almost infinite number of things, from gender roles, to nutrition patterns.In terms of the Utah Jazz, our culture seems to heavily skew towards tradition. The point guards need to be passers. The centers need to protect the rim. The power forward usually takes most of the shots. And well, the wings . . . the wings fill out the roster. We're not known for being a team with headlining wing players. Honestly, unless I'm missing something, after the Finals years we've had a number of notable point guards, power forwards, and centers on the team. But the only really notable wing was Andrei Kirilenko.

The Jazz wing corp is made up of:

The Jazz also lost Josh Howard (hopefully) and C.J. Miles (to the Cavaliers). Let's take a quick look at where they shoot from, according to the 2011-12 data: 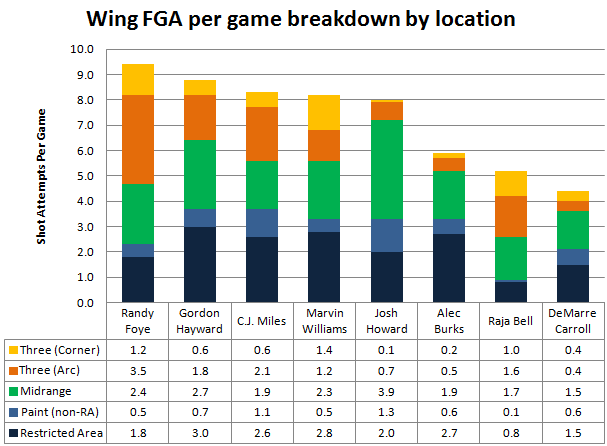 Wow, so all but Alec, Raja, and DeMarre shot the ball 8 times a game, did you know that? I did not. The biggest thing that pops out is that Randy shoots a lot of threes. About half his shots are threes, 4.7 a game. Is Randy going to have the green light to shoot 5 threes a game here in Utah? Probably not. That said, if you are signing Foye you are signing Foye for his threes. That's the only great part of his game -- and if we try to change his game he's going to be a failure here.

The other big thing that jumps out is that Josh took a lot of midrange shots. Is this where we want our wings to take shots from? Perhaps it is. The silly thing is that Josh Howard shot 32.6 fg% from midrange last year. He was horrible. And please, yes, note -- these are the FGA chart values. You can shoot a lot from a place -- but if you are BAD at it, you're just hurting your team.

Looking at FG%, PPS, PPP, etc . . . you get a clearer picture. But nothing is as clear as points. So . . . here are the points from each location (and also free throws). 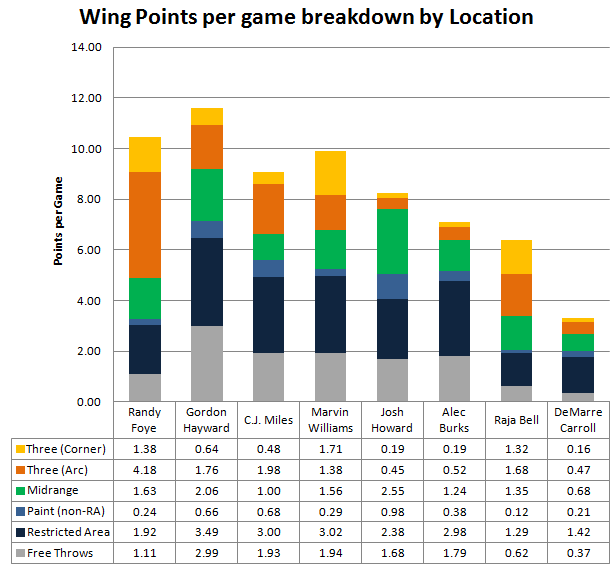 Foye not only takes more of his shots as threes, but most of his points are from downtown too, according to this data. Guys like DeMarre and Alec and Josh are not so strong from the outside. Gordon, Marvin, and well, Raja, seem the be the most balanced in their scoring attack. C.J. is up there too, but we know he scored a lot but did not necessarily have great shooting this year. (Josh did not either, their fg% was in total barfmode all season long)

The really interesting thing to do is look at projections for 36.0 mpg (because, as it would be believed, no one is guaranteed to start just yet). 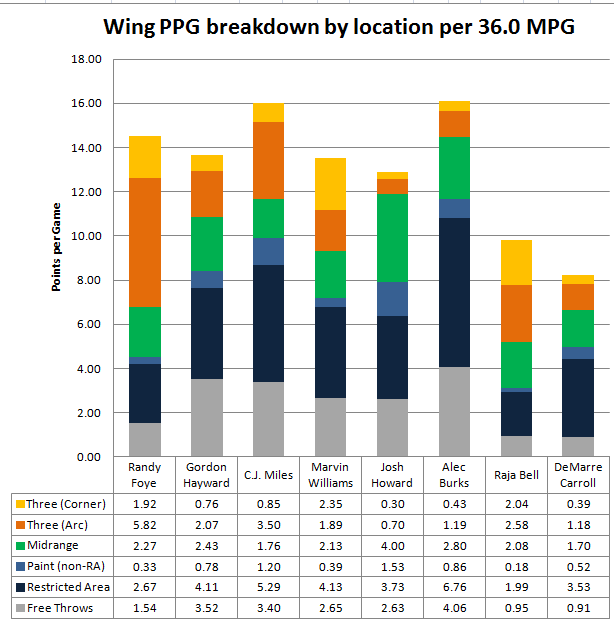 HOLY MACARONI ALEC BURKS! (Using his government name here because this *ish needs to look official!) Foye is scoring 8 ppg off of threes alone, which means he's making 2.67 threes a game per 36 minutes. At a 39.05 3pt% clip that means he's taking 6.8 threes a game. THAT my friends is more unreasonable and fantastical than Burks getting 36.0 mpg at some point.

Btw, shooting guard who can average over 10.0 ppg just off of free throws and points in the paint = D-Wade. Give Burks the playing time which gets him the confidence to do better from outside -- and the eff out of the way.

In non-Burks news, I'm excited to see Marvin and Gordon play in the Flex offense. If they are playing in the "Stand and hold your shorts" offense they aren't going to look that great though.