The news that Kevin Murphy signed broke on Friday (as possible as it is to "break" news of a 2nd round pick signing), but as always, terms of the contract were not released. Usually, that phrase is somewhat of a joke, as everyone in the entire world has heard the terms of the contract through the news media before the team gets around to making the move official enough to make a press release about it.

This time, though, the press release preceded the media buzz, and the media that usually investigates these kind of things, namely, BTS, was on vacation. So we get nothing. Did Kevin Murphy get a non-guaranteed contract, basically an invite to training camp? Or did he sign a Millsap-esque three year rookie deal keeping him cost controlled for the foreseeable future? No one knows.

Our only hint: this tweet from the man himself:

Bout to get something to eat. Then I'm goin house shopping in Utah!

From this, I would venture to guess that he has more than a camp-invite in a crowded roster, and would bet that his contract is guaranteed through at least the contract guarantee date: January 10th. But this is just a guess, and an official request for someone in the media to investigate the matter.

ESPN's NBA Rank project is at it again, infuriating fans of teams from across the country since 2011. Today, they released players 51-60, and Utah's Paul Millsap ended up at 53.

That part is not so bad. I've made the case that Millsap is very underrated, and in fact deserves to be somewhere in the top 40 or 30, but I understand that the collective wisdom will almost inevitably underrate him due to his particular skillset, as well as other factors.

But you, Mr. Blazers 6th Man, really grind my gears:

@nbaonespn Paul Millsap 53. That's the highest you're going to see any player this year who should frankly be a backup. #NBARank

Can I call you Mark, Mr. Blazers 6th Man? I'll call you Mark. I'll even put aside that you have no evidence whatsoever for your assertion that Millsap should be a backup. It's a tweet, and nuance is hard to pull off.

But Paul Millsap should not "frankly be a backup." That's misguided. I would suspect that a majority of fans find Millsap Utah's best current player, and if you'll remember, Utah was a playoff team last year. (Gee, I wonder which team wasn't?) Indeed, you can make a reasonable case that Millsap was better than your best player, LaMarcus Aldridge. (Note how somehow Millsap has a higher rebounding % than Aldridge, even though Aldridge is 6'11 and Millsap is shorter than our starting 2 guard. Note also Millsap's Adjusted +/-, WS, and better DRTG. Yes, there are things in favor of Aldridge. But the argument is there, they're in the same tier.) It's probably reasonable to note that YOUR TEAM thought he was starter quality when they gave him a 4 year, $32 million dollar contract years ago, and oh, he's gotten probably 60% better since then.

Quite frankly, I'm getting tired of people not believing in Paul Millsap. It's really quite clear, when you really study the issue, that he's an excellent player. But because he's been around too long, or because he's not as tall or as long as other guys, or because he's not young, or because he seems too slow, or because he was a 2nd round pick, people don't hold him in the same regard as they should. But not a single one of those reasons matters. Just like Billy Beane says in Moneyball, we're not selling jeans here. Millsap has instead found ways to play like a high first round pick and that's what we should actually care about. Consider:

This rant has perhaps gone on too long, influenced by the soul-sucking "scenery" (read: outrageously low ceilings and terrible architecture) of Denver's airport, but the point stands: those who underestimate Paul Millsap do so at their own risk.

To make up for that rant, and to give me a chance for a breather, here's yet another hilarious picture of Enes Kanter: 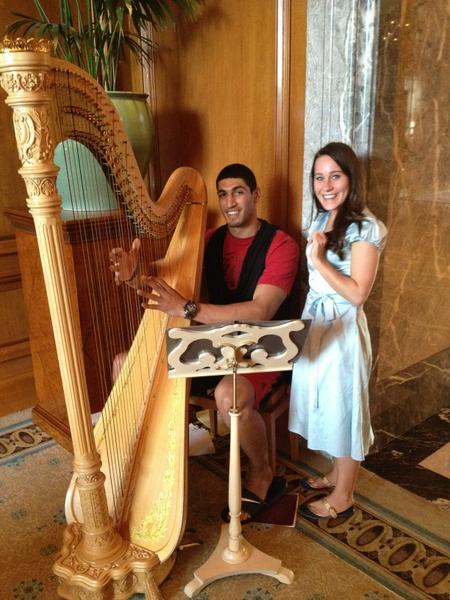 Are there any ladies Enes Kanter can not woo? I submit that there are not.

In this week's podcast, Clark and I ranked the Jazz' full 15-man roster from best to worst (looking at only current ability, and not regarding potential at all), and it was a pretty good exercise. My list is:

On the other hand, Clark's was:

I am interested to know, though, if I am crazy. Am I alone in my esteem of Millsap's game? Poll time!