In the NBA off-season there really hasn't been much to talk about. Not like there were blockbuster trades (Dwight Howard), free agent moves (Steve Nash), or draft picks (Senor Eyebrow) that are captivating enough to last long in a 24 hour media cycle. Well, yeah, there are lots of things to talk about - but we are now going to revisit ESPN's aggregate ranking of NBA players. (Seriously, asking 104 people to rank all the NBA players from 1 to 10 . . . impossible.)

The Utah Jazz aren't "the hottness". Our players aren't highly regarded. They don't sell shoes. They aren't flashy (according to some). But all in all, it's always interesting to look at what other people think and feel. Even if it's an average based upon 104 different people -- some who I've never even heard of before. (Seriously? Bruce Bowen? What kind of a made up name is that? I'm sure he knows nothing about basketball...)

Anyway, because the Jazz 'team ranking' page doesn't even include all the guys on the Jazz right now you have this. (You are welcome) I'm not joking either, their page fails to show Jamaal Tinsley or Jeremy Evans. #Worldwideleader 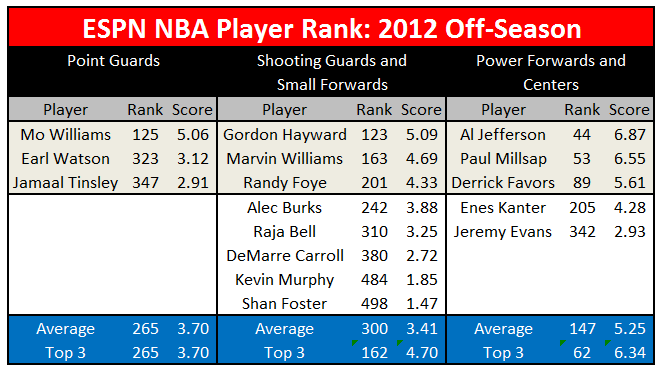 There are no Top 25 players on the Jazz. (Let alone a Top 15 "All-NBA" Player, you know, that ONE common factor that ties together all successful NBA teams that do something in the playoffs) Al Jefferson is our best player, at #44. Paul Millsap is our second best player, ranked #53. And well, Derrick Favors is our third best player, at #89. Our three top players are all bigmen, and four of our top eight are guys who are power forwards in idea situations.

The Jazz do have five players in the Top #125, so --essentially-- our starting lineup has an average rank of #25. But that would be a starting lineup of Mo Williams, Gordon Hayward, Paul Millsap, Derrick Favors, and Al Jefferson. That line up will work in certain situations, but not all situations. Overall, I'm not worried about ESPN's ranking of our players. I'm more worried about how the NBA End of Season awards feel about our players. You need an All-NBA 1st, 2nd, or 3rd team member to build around. As far as 2012 is concerned, ESPN's 104 experts do not believe that Big Al Jefferson is one. And neither is Paul Millsap.

Not to end this on a Debbie Downer chord buuuuuut, three Jazz players earned an ESPN Player ranking lower than that of Greg Oden. Ouch!