The Summer of Enes Includes Jerry Sloan: The Downbeat #843

Share All sharing options for: The Summer of Enes Includes Jerry Sloan: The Downbeat #843

Aren't we so excited, there is Jazz news a buzzing again. We're now in the latter-half of September, we are less than two weeks away from the start of Jazz training camp! How excited do I get about training camp, excerpt from my family blog five years ago:

News about this upcoming training camp from Brian T. Smith:

Veteran forward Trey Gilder is expected to compete for a roster spot during the Jazz's upcoming training camp, The Salt Lake Tribune learned on Wednesday.

Gilder, 27, was on the Jazz's 2011-12 training-camp roster. He was cut from the club before the regular season started, though.

So fun that we are finding out about training camp invites already!

Hoopsword did a preview of the Jazz. There has been quite a bit of talk, of their evaluation of our team.

It is a good read so make sure to read the entire article.

Five or Hoopsword writers shared their opinions and predictions about the Jazz. All five writers predicted the Jazz to finish 4th in the Northwest. The have a section called Top of the List

Al being named the Jazz's best defensive player cause quite the stir on Twitter. Yannis Koutroupis was kind enough to talk to me on Twitter about why he selected Al Jefferson. I appreciate the time he took to explain his reasoning and I can understand why he might chose Al. Here are his tweets to me:

I talked to several Jazz players this summer and they all said Favors can be a beast on the defensive end, but

I went With Al because his impact is bigger on it, especially from a numbers standpoint. I try to give those

superlatives to guys who either start or play near starters minutes; Favors does neither and with Al and

Millsap there I don't see that changing.

I clearly state there that Favors warrants mention, but I didn't feel comfortable giving him the honor when two

better players are in front of him taking the bulk of the minutes.

I just wanted to give that honor to the player who has the biggest impact on the defenisve end, and the

numbers said to me that AJ is that guy more so than DF, based on what he produces and the time he's given.

So now that you see Yannis's reasoning behind choosing Al, do you agree?

Amar shared with us yesterday how many times the Jazz will be on NBATV next season .

I thought this conversation was pretty funny about the original article: 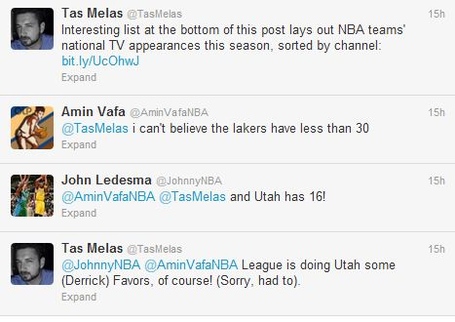 John Ledesma is a great NBA fan, a Lakers fan. I laughed that a Lakers fan compared how many times the Lakers are shown in comparison to the Jazz.

Yesterday DJ and PK announced that Enes Kanter, Jerry Sloan and Frank Layden would be among some of the celebrity participants at the Bear's annual Mascot Bowl at Lehi High. The game will be on Monday Sept. 24th.

So the summer of Enes continues!