Putting the beat down back in the down beat: The Downbeat #844

Share All sharing options for: Putting the beat down back in the down beat: The Downbeat #844

Al Jefferson is, right now, the straw that stirs our offensive drink. And while he's not the best first option on average, he's still more than capable of taking care of business. And when he's "feeling it" other teams almost have no other option than to just take it like a big girl, because they can't stop him.

In his first season with the Jazz, Big Al averaged 18.6 ppg, and in his second season he averaged 19.2 ppg. Both times he shot under 50 fg%, and both times was veeerrry close to averaging a double double in rebounds, and also average 20 and 10. 20 and 10 seems to be the measuring stick for bigmen in this league, and this is true for our franchise as well. Carlos Boozer 's best seasons were those 20/10 years. And 20 and 10 is what Karl Malone would get in the middle of the 3rd quarter. Right now Big Al isn't a 20 and 10 guy. He's close. But what makes Big Al super dangerous is that he does get really hot at times, and when he is feeling it, he administers some down home, old country, backwoods beat downs.

On the most easy of standards, the flat out 20 and 10, Al Jefferson has 37 of them in the 1.5 seasons he played here. Not impressed? Well, besides being +19 on the next closest guy in that time frame (Millsap), it's still not EASY to do. In the 23 total games (regular season and playoffs combined) in the last two seasons where someone has scored 30 or more points . . . Big Al has done it 14 times. That's means that 60.9% of the time someone goes off, it's Big Al going off.

But it's not about overt scoring anymore, especially not with how our team is TRYING to share the ball. What Big Al does well isn't just scoring, or rebounding, or blocking shots. It's really a combination of all three. He's not a 3 blocks a game guy. He's not a 15 rebounds a game guy. And he's not a 25 points a game guy. Over the last 1.5 seasons Big Al has 34 of the 48 total games by a Utah Jazz player who gets at least 15 points, 10 rebounds, and 2 blocks in a game.That a healthy 70.8% of the time it happens.

What's special about 15, 10 and 2? Well, for one, it means that you're the best center in Utah Jazz history by the numbers. But the other thing it means is that you're doing more than just one thing to help your team win. Memo was a fantastic shooter and adequate rebounder. Mark Eaton was a fantastic shot blocker and good rebounder. Big Al? He brings the points, rebounds, and blocks. That's a new one for us.

Moving onto the other side of the ball we have defense. And the D in defense for our club moving forward is going to stand for Derrick Favors. As a 6'10 (and growing) young 20 something he has a lot of room for improvement -- physically (he's still growing), athletically (P3 has improved on his already impressive 12'+ maximum reach), and fundamentally. He has a lot of basketball to learn still, and he's only going to get better. And last season he was already pretty amazing on defense.

Favors, for the entire regular season and playoffs, got singled out on defense a bit by other teams, and the players on those teams only scored on Derrick at the hyper efficient rate of 38.4 fg%. That's everything from pick and rolls to guys spotting up. Derrick defended them all, and for the most part, did way better than most 2nd year players. Where Favors really shines, though, is when defending guys posting up.

According to Synergy Sports, Derrick was the #47th best post up defender in the league. That is significant because about a quarter of all the plays he defends is a post up. (He's a mobile big so he defends all over the floor) So posts up were what he usually faced, and he performed exceptionally well. 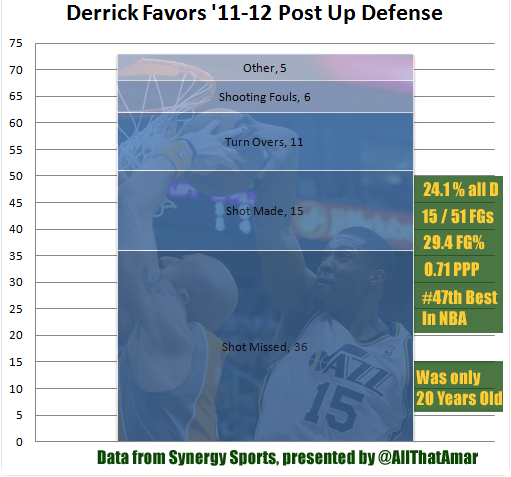 By a point of comparison, Al Jefferson allowed 0.77 PPP (39.8 fg%), Paul Millsap allowed 0.84 PPP (49.2 fg%), and Enes Kanter allowed 1.05 PPP (54.8 fg%). On defense for the Jazz Derrick Favors brought the beat down. And he did not hold back. He caused a turn over nearly twice as often as he was called for a shooting foul. He was prey to only 2 "And-1" plays the entire season. And, man, I cannot stress enough how POORLY the other team did when posting up on D-Fav. If they didn't know before, they know now. Just don't do it.

What REALLY sucks for the other team is that Favors is also great at defending the pick and roll. The ball handler is forced into a turn over 33.3% of the time, and he is ranked #63 in the entire NBA at defending the guy who sets the screen in a pick and roll. Despite being OPEN, that guy STILL only shoots 41.2 fg%. Which is like a career night for a certain "starter" we had last season . . .

I severely trashed Josh Howard last night, and I kinda feel bad. The theory was that a veteran guy who "had been there", and who had previously had good games against the Spurs would have been a positive X-Factor. Especially if he could get hot early and be a significant net positive for our team in any given game. Yes, the Jazz went on a roll leading up to the playoffs starting Gordon Hayward and DeMarre Carroll. But Coach Tyrone Corbin went with the guy who - if anything - COULD be that guy who could help.

He did not help though. But I guess it was "worth a shot", after all, what's the WORST that could have happened? You know, the worst besides a guy who shot the ball frequently, early on in games in the playoffs, while making only 5 total field goals in 4 games . . . 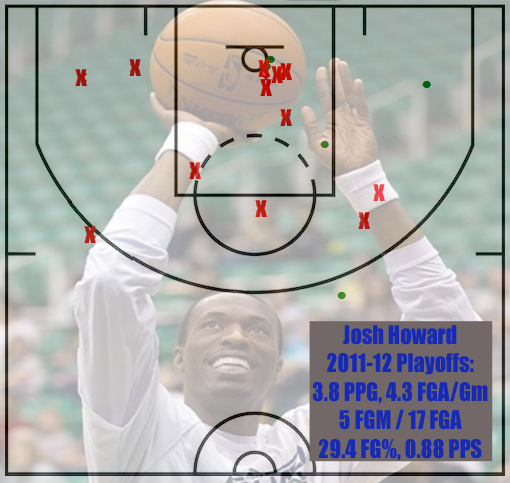 Clearly, on paper, Josh Howard could have taken over, but instead of administering a beat down, he beat the Jazz down by getting us out of games early and often. I guess it's really our fault for expecting him to "take over" a game. A larger sample size would be his regular season where he was a net -71 between what the Jazz scored and what the other team scored when he was on the floor. Actually, it goes beyond that though . . . Overall when the Jazz played without Josh they were a net +2,647 for the season. The Jazz were a per 100 possession net -2.9 with Josh on the floor. I'm not going to tell you to look up what that was in the NBA playoffs.

When was the last time that we had a guy just *really* take over a game? I think the best candidate for that last season was Al Jefferson's dedication game where the Jazz just rolled over the Detroit Pistons at home. The Jazz won by 15 in a season where we did not often win by a huge margin. The biggest difference WAS Big Al, I think. Jefferson finished with 33 points, 12 rebounds, 2 blocks, and 1 assist. He went 4/4 from the free throw line, 1/1 from the three point line, and most impressive to me (even more than the three), was that he went 14/18 from the field. All in all, he shot 77.8 fg%, and had an AMAZING 1.83 PPS value.

The next most recent time we had that "take over" game was probably Paul Millsap in his "Miracle in Miami game". Earlier still we had some distinct "take over" games all in the same playoff run back when Deron Williams was at the helm. The entire Golden State Warriors series back in 2007 was a take over experience.

I've used up a lot of numbers so far in this Downbeat, and I don't want to be the Indian version of Andy here . . . so let's instead watch this video uploaded by our friend Adam (@prodigyJF / MemoIsMoney on youtube):

Wow, not only is the game where Greg Ostertag had a larger impact and statistically neutralized Hakeem Olajuwon (Greg had 16/14/3/1, The Dream had 16/11/6/2) -- but the close out game on the road where John Stockton "...sends the Utah Jazz to the NBA Finals!" Man, Stockton had a 27.1 USG% for that game, and a 54.9 AST% -- yet people say he is inferior to the likes of Allen Iverson et al. Still, this beat down on all five rockets players during the 4ht quarter is a beat down that the Houston fans still haven't recovered from.

I think that "The Downbeat" is the most important part of this website. After all, for the longest time during the off-season it's really the only consistent piece of content here. This is true for what was happening back in July, and this is true for what was happening back four years ago. And it is true today. There are going to be some changes to the website. And as a result, there need to be changes to the format of some of our works here. I'm not a Downbeat-guy. I think we have enough great talent to handle that already. But this is a slightly different downbeat format than what you are used to. Because of the SB Nation United layout this type of thing would flow better than our previous "two full scrolls on the mouse" style downbeats.

I think the main thing is that we need to maintain the level of content that we love, but move with the times. You need to click on the Downbeat link to comment anyway. Now you get a teaser of what the Downbeat is all about, and then you get full, glorious, long downbeats filled with content.

For a non-Downbeat guy I think this isn't the worst Downbeat I've ever written. Part of it was because of the synergy of the old format with this new one. What did you think? If you liked this style of Downbeat, or have any other comment to make please feel free to hit us up in the comments section, on twitter, or e-mail. Change can be scary, but also necessary at times.