In order to know where we are going, we collectively need to look at where we've been.

Today is September 22rd. A month from now we'll already know who is cut from training camp, right now we only know of one invite to camp. And two months from now the Utah Jazz would have already played 11 regular season games. I guess it's time to start the season preview articles. I am, I guess, a rational empiricist. I believe that in order to really understand and identify what you HAVE requires for you to construct a frame of reference with which you can use as a proverbial measuring stick. As Jazz fans we have the idea that we are a good team and a good franchise. Of course, when we measure ourselves against the likes of the Minnesota Timberwolves this may be correct. When we measure ourselves against the Boston Celtics and Los Angeles Lakers this may be less true. Against the whole league, the good teams and the bad teams included, I think we still hold that we are not only a good team, but also a good franchise. This may be, indeed, the case. However, in addition to the idea of a frame of reference, we must also include a time frame as well. Over the last decade we saw:

We're now approaching year three with Al Jefferson, Derrick Favors, and Gordon Hayward. Year two with Enes Kanter and Alec Burks. And sadly, perhaps even our LAST year with Paul Millsap. Where are we going to end up? Well, the first step in predicting the future is to understand the past. So let's do that by examining the last Jazz decade . . .

While this league may be run on money and star power, what most fans really care about are wins. Over the last 25 years (or so) we know that the Jazz have averaged about 50 wins a season. They also average about 5 playoff wins during each playoff trip. I know this because I crunched exactly those numbers LAST off-season. Twenty five years is a long time. But that time period may be an invalid time to look at when looking at THIS Jazz team. The ups and downs, success, failure, frustration, and turmoil of the last decade though? Perhaps that's a more accurate time frame . . . after all, despite all indications from our front office, we are NOT a contender. We're not contending. And we are a team in transition. To suggest otherwise is to abjectly feel like your absolute financial bottom line relied on lying to your fan base. Maybe that's too mean to say, but I think there is some truth in my harsh words. We're not contenting right now, and our front office are telling the fans the opposite of reality.

My feelings aside let's look at how the Jazz have done, wins-wise over the last decade: 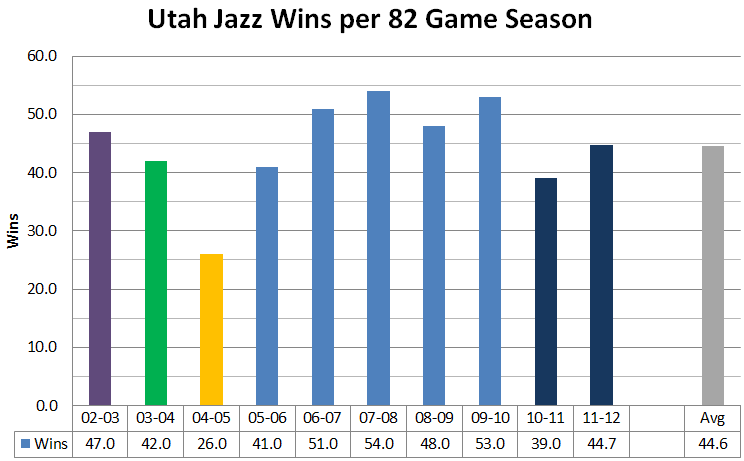 So instead of the gaudy numbers of 50 wins a season, for every season, over the last decade the Jazz have averaged only 44.6 wins. What's the difference between 5.4 wins a season though? Well, that's playoff seeding right there. Back in the good old days the Jazz were ALWAYS starting the playoffs with home court in the first round. That really did not happen over the last decade, even with Deron and Booz running things.

Where is this team now? Well, looking at the 'lines' from the previous seasons it would appear as though the progress from 2010-11 to 2011-12 looks a lot like the progress from either 2005-06 to 2006-07, or 2006-07 to 2007-08. It's somewhere in-between, which makes sense as our current team is not a team that has bottomed out and is growing organically. We're currently two teams, slapped together. So we don't know if we're growing organically anymore . . . we're a mix of vets who do best in the halfcourt, and a group of players built for running. So, as a result, I don't know if our growth year by year is quite going to grow like it did during those DW-CB-AK-MO years.

I guess the issue is . . . are we in Al Jefferson year 3? Or C4 year 2? I think that makes a huge difference in terms of our EXPECTATIONS for wins, and also our expectations for improvement. The Jazz won (if a 82 game season) 45 games last year. Are we a 50 win team this season? I guess that's the big question.

To really look at what we are as a team now still means we have to go deeper and look at what our teams were . . .

The average Jazz team from the last decade has an offensive rating of 101.9 and a defensive rating of 100.9 points per 100 possessions. As far as the playoffs go, this Jazz team has won 4 rounds, and been to the playoffs 6 times. That means we're getting bounced more than we're winning. The Jazz have been 1st round exits three times, 2nd round exits twice, and a WCF loser once in the last decade.

Last season the team did go to the playoffs, but the offense was pretty below average compared to the last decade of Jazz teams. (I know the team was better than a lot of other teams, but let's not lie to ourselves, it was the offensive rebounding that made us good, not that we were specifically efficient in other ways...) The defense was good though. So, I guess there is hope there. Over top scorer and rebounder, Big Al, was pretty close to Jazz average for the decade. Blocks and steals were pretty close too - the main problem, I guess, with our offense (don't say three pointers, don't say three pointers . . . ) appears to be our top assist man. Does this mean that the assists were more spread out? I guess a real nerdy guy could figure that one out later - - - but I think a big part is that we're still scoring and just not getting assists. (Isolation plays where a scorer holds onto the ball so the score is not an immediate result of a pass, or scoring off of offensive rebounds)

The Jazz were a team on the down run of a long line of great teams, and turn into a barely playoff time over the last decade. The Jazz did not enjoy home court much during the D-Will era, but were still very good offensive teams (07-08 had a better OFF RTG than the last year of Stockton and Malone). Defense is an up and down thing, and remains our greatest challenge going forward. However, Alec Burks is a great pick and roll defender, and so is Derrick Favors. Gordon has surprising athleticism, and Enes is an immovable granite Adonis. I think defense WILL get better.

To indicate growth the Jazz need to do better than they did last year. In terms of simple wins and losses, this means winning more than 45 games next season. If we're around the same number of wins, be it 43 to 47, then I don't think you can say we got better. The Jazz will, for me, make the next step once they reach the 50 wins plateau.

Will the Jazz win 50 in Al Jefferson year 3? Or will the Jazz win 50 in C4 year 2? Or.... well.... will it happen in C4 year 3 or 4 or 5? We don't know. But with the frame of reference of the last decade we know where we have been. I guess this only means we know how much better we have to do to show improvement. For me this means winning +5 more games, reaching that 50 wins in a season plateau.

When you take 2012-13 as a test year you can't be mad with what happens. Instead of holding onto ideals of development, winning, and playing Jazz basketball (which I know I naturally would want to get upset over), I'm going to try to look at this season as a test year. More data = better analysis.

We know where we were over the last decade. Last year was such a crazy year, we can't really infer anything from it. This year . . . this year is going to be a great year because we're going to find out so much about our players, coaches, and playbook.