Share All sharing options for: Kyrylo Fesenko Doesn't Pay Much Attention to the NBA- The Downbeat #845

You have two choices. Either click on the "continue reading this post" button and enjoy a downbeat, or else just keep scrolling down and walk away. You could choose to bypass the downbeat, but then you'll have to live with yourself for the rest of the day, wondering "what if I had just read that downbeat? What was behind that mystery door?" You don't want to live with that regret.

By the time you start reading this downbeat, we will be within one week of the beginning of training camps opening. That means there are only 15 more NFL games between now and camp opening. Only 168 more hours. Only one more Randy Rigby interview on 1280 the zone. Only 5 more cheeseburgers for yours truly. You get the point. It's coming. Soon.

Speaking of training camp, the Jazz continue to invite players to training camp. The Jazz have 14 players under guaranteed full year contracts and possibly 15 depending on the details of Kevin Murphy's deal. The Jazz are allowed to "sign" up to 20 total players for training camp. Sign is in quotation marks because if the Jazz invites aren't the 15 I mentioned already, they are paid only to come to camp and nothing else. Guys like Brian Butch, Darnell Jackson and Trey Gilder have invites to camp and "make good" contracts. Rumors, or Josh Howard's agent, have him possibly being invited to camp. You can click on any of those names and find a link for more info on those invites. But here's the thing:

These guys aren't being invited to camp in order to make the team, at least not now. For one, the Jazz don't have space. For two, the Jazz don't need these guys. When Wesley Matthews made the team, the Jazz had only Ronnie Brewer, Ronnie Price and Kyle Korver who could realistically play shooting guard. Then Kyle Korver had surgery and missed the first 23 games of the 2009-10 season. The Jazz desperately needed wing help. Wesley Matthews got a chance. The Jazz don't have openings for big men or a small forward right now. Unless, and that's a big unless, there is a major injury to a Jazz player, the Jazz are too deep and too crowded for any of these guys right now. It's nice for the Jazz to have bodies in camp and it's nice for these guys to get workouts with NBA teams and get their names in the discussion. But they aren't in the Jazz's immediate, or probably long-term plans. Remember the last two development league callups, had never been invited to a Jazz training camp. 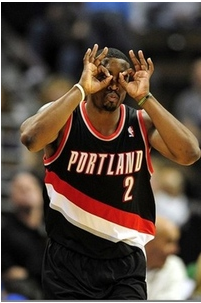 Jody Genessy is a triathlete and motivational speaker, but in his spare time, he writes about the Utah Jazz for the Deseret News. He wrote a great piece about Gordon Hayward and here is an interesting quote from the article:

"You want to start for the team and you want to make sure you're the one out there on the court, getting as many minutes as you can, Hayward said... Now I think I know that I belong and everything. Now you push yourself even further, try and become an All-Star. That's definitely a goal of mine, but I think first and foremost I think if we were to win games that will help that out."

I like this attitude from Hayward and I'm guessing each of you are okay with it. I think that is because we all can mostly agree that Hayward should start for this team. For the record, this is what I want each of the Jazz players to think and feel. I want Millsap to have this attitude, and Jefferson, and Burks. I want each of them to want to start and play and achieve their best goals, but also realize that winning is the most important thing.