I really, really know that our problem is defense. I think we all are likely to point fingers from time to time, so I'm not going to do that. I know defense is the problem. I also know that one of our young guards is ranked #8 vs. defending guys coming off of screens, #40 vs. defending the ball handler off a pick and roll, and is #108th best overall on defense. Furthermore, I know that one of our young bigmen is #47 vs. defending post ups, and #63 vs. defending the ball handler on the pick and roll. He's also the #170th best player in the league in defending guys isolating against him. I also know that those two guys played 514.15 of a total 16165 minutes of the season together on the floor. But hey, who needs details about defense like our two better defenders being on the floor together for 3.18% of the season.

Defense is a problem, but offense is also a problem. Avoiding the issues of offense isn't going to make us better. I took it upon myself (you know, because no one hands me a script) to research the last decade of Utah Jazz basketball. I took a look at how the team played together (PPG, Pace, and Offensive Rating); and I also looked at the top four scorers on each of those teams (PPG, shots per game, and PPS). The information I got was interesting. I'm not going to point fingers here, I'm just going to give you the data. What you choose to do with this information is up to you.

The Jazz overall and points per game:

The same size was for all the regular season games from the last decade. That means we get 2002-2003 (the Stockton and Malone swan song), all the way up to last season. We have the rise and fall of Deron Williams and the beginning of this new era of questions.

Over that period the Jazz averaged 98.3 points per game, and the pace has been at 90.6 possessions per game. The Jazz are not breaking any land speed records, but they are still a competent scoring team. This is clearly in evidence by the 107.6 offensive rating. (That's basically how much we WOULD score if we had 100 possessions in a game)

The average breakdown between the Top 4 scorers on the team is:

Clearly we know that this was not the case last season. The team was an okay offensive team as far as our last decade is concerned (Pace was +0.8 faster, Offensive rating was -0.8 lower; and the team scored +1.4 more points per game). The offensive load was very stratified. Our top two guys were pretty close to where they should have been; however, it looks like they did not get much support.

Was this because the third and fourth options were BAD compared to the Jazz average, or was it something else? I don't really remember who the 3rd and 4th options were without having to think about it. I don't remember them shooting that much. Last season the Top 2 options scored -0.8 less points a game, but the 3rd and 4th options scored -2.9 less points a game. Maybe this last Jazz team was more polarized in terms of shots than normal -- and as a result, that's why the top two guys did not appear to have much help? Let's take a look at the shots per game.

The ten year average shot distribution isn't that weighted for one player as I would have thought. The top scorer doesn't even average 15 shots a game.

Again, this is from the last season of Stockton-to-Malone through the Boozer, Williams, Kirilenko, Okur years, and now. I think it's fair to say that this distribution is not similar to what happened last season either. In fact, the top two scorers took +2.8 more shots a game than normal; and the 3rd and 4th options took -2.6 shots less. I guess it's easy to see some relationship there. The top two guys didn't get the support they needed because they took away shots from their help.

I love points per shot (PPS). Why do I love it? Because it's probably the simplest way to see if a scorer is efficient or not. If you're good, you're going to score baskets and make your free throws and also get to the free throw line. PPS is Total points divided by Total field goal attempts. Simple. The baseline for the NBA is 1.21, as we found out recently. If you are good you'll have a PPS value above 1.21. How did the Jazz do over the last decade?

Over all, the top Jazz scorers each season had better than average PPS values. (Btw, these are not averages of averages, I actually inputted all the shots and games and points for the top 4 Jazz scorers per season for the last decade -- and did all the math). How did the Jazz scorers from last season fair?

Well, the 4th best scorer last season had a higher PPS value. And the 3rd best scorer last season did as well. They were both in the 1.32-1.33 range. What about our top two scorers? They did not fare so well. The 2nd option's average is 1.34, and the 2nd option only managed a 1.23 last season. That's above average, but not at the killer rate our own Jazz team has had over the last 10 years. And the first option? Welp.

The first option average for PPS is 1.29, above average and pushing 1.30. Last season it was 1.12. That's a mark that is not only below average, but way below the efficiency our team needs from their first option. We're not the Sixers, and we're not running some Allen Iverson offense.

Data for the Last Decade, by PPG, Shots per game, and Points per shot: 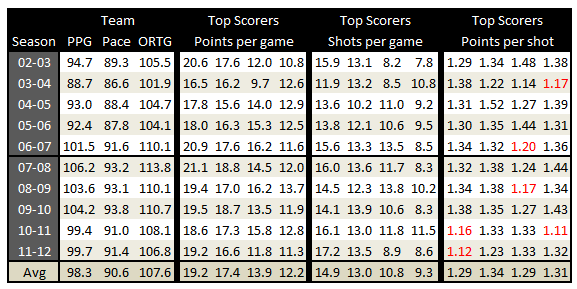 The Jazz offense was right about average, even if the top two guys were not so hot.

A quick review before moving on . . .

From what we know so far . . . the first two options did not score at the rate they needed to, but still managed to score about the same amount as average. They did this by taking more shots, and as a result, there were less shots to be had for the other scoring options. Ultimately, the top two guys "did not get the scoring help" they needed; but all of these points seem absolutely connected to one another.

If the other guys got more shots, it would take some of the pressure off of the top scorers. Right? I don't know. Let's looking into this EVEN deeper.

Break down by Scoring Option Rank: 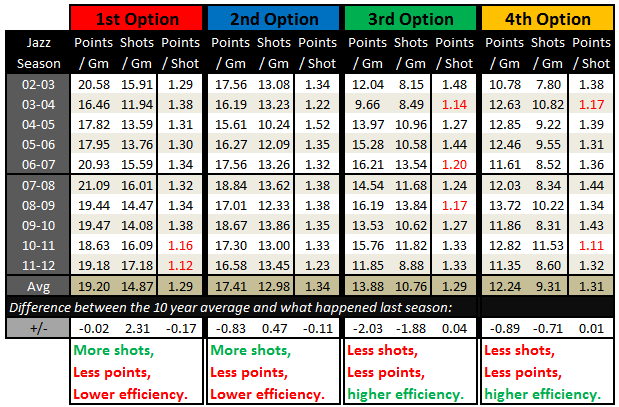 I think that chart kinda says everything I wanted to say. But let's get into the specifics here.

No one is saying that the first and second options on our team for scoring are bad options for scoring. No one is say that they are bad people either. They are good scorers and good people, and I'm sure we would all love them if we got to know them a little better. What the DATA is saying is that last year they did not score at the efficiency that the previous decade of Jazz ball would require. If I increased the sample size to include the last two decades of Jazz ball then it will even more skew towards efficiency with Karl Malone's peak years (when he was a 1.45 PPS guy), coupled with adding the hyper efficient John Stockton, Jeff Hornacek, and Jeff Malones to the equation. This last decade is the most favorable data set to make the results look less bad.

The results ARE bad though. The team needs to share the sugar a little better if they want to get back to playing, statistically validated, Jazz basketball. Or, their first two options better step it up this season. No names, no finger pointing. Put the ball in the basket better than you did last year.