When the concept of a 24 hour tv station absolutely dedicated to the league I love was being bandied around I was in love with the idea. Why wouldn't I? It's a station all about the NBA, and as a result, we'd hope at least, that there would be more converge of smaller market teams. On ESPN, or some other news station that handles more than one sport, you know you'll get stories about the Yankees, Lakers, Tiger Woods, and Brett Favre 3 times before you get the score of your team. But on paper, things would be different on NBA TV. Since their start in 1999 till now, 13 years later, the station has grown. The league has grown. And the league's popularity has also grown.

What about the idea of being 'more equal' for the smaller market teams? Well, first and foremost, the teams that have the biggest stars will always shine brightest. The NBA is the most 'player visible' sport out of the major four sports; and the entire marketing push since the 1980's has been about the players, and not the teams, or the league. The Utah Jazz, do not have any big stars right now, and are a small market team. But most of the other teams in the Northwest division are smaller markets as well, or do not have a grand history. So how do you break down the NBA TV's preview of the Northwest division? Well . . . Diana pointed out the disparities first in her Downbeat today. The entire segment (online) was 7:04 long. There are five teams in the division, so using the magic of math, the average or baseline time that each team should have had was 1:24 minutes long. You can watch them at this link: 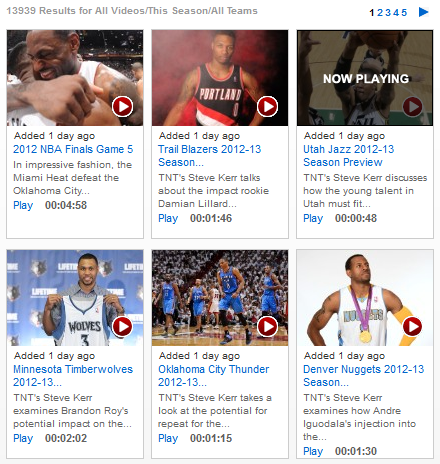 So we see that the 'equality thing' did not really happen. The teams with the stars got huge boosts (Andre Iguodala on the Denver Nuggets; Kevin Love, Ricky Rubio, Brandon Roy, and Andrei Kirilenko on the Minnesota Timberwolves; LaMarcus Aldridge for the Portland Trail Blazers) -- so much so that they ALL got longer previews than the team that represented the Western Conference in the NBA Finals. Clearly this is also helped by issue is that the Oklahoma City Thunder are going to get a lot of shine elsewhere on NBA TV and the NBA.com site all season long.

The clear losers here are the Utah Jazz, who actually made the playoffs, have a history of doing so; but are both in a small market and have no stars. So we get 48 seconds, when we should have had 84 seconds (1:24 minutes). 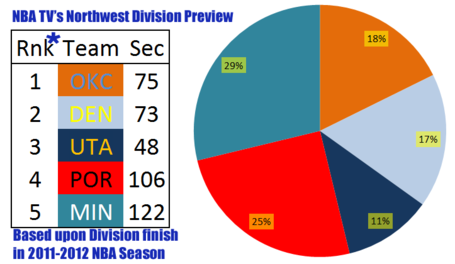 I guess the only solace we'll have is actually being a playoff team, while two of the teams that got more shine in this preview will not be. Oh, that's right, we're a team that makes the playoffs and WINS, and doesn't tank . . . but those aren't the things the NBA wants to promote though. Look at Rubio's beautiful doe eyes! Look at LaMarcus struggle to get 8 rebounds in a game! Look at Iggy scoring 12 points a game! WOWWEE!

Let the games start, and let's start rolling these sorry franchises back into the cellar.