As Utah Jazz fans we love our players, after all, we love our team, right? It's natural to try to hope for the best. Always. As a point of reference, Atlanta Hawks fans, while sad to see one of their guys go, view Marvin Williams ' departure like we Jazz fans view C.J. Miles leaving town.

You wanted a guy on your team to finally 'get it', and love them, but aren't broken up over the loss. Yes, some of us, myself included, are expecting things to go right for Marvin this year, while expecting C.J. to stay the same with the Cleveland Cavaliers. While Hawks fans are expect something nice from Devin Harris. It's in our nature to wish, expect, and hope for the best when it comes to our team.

This brings us back to Alec Burks. He's young, hardly played, and did some things well, and did some other things poorly. He's super young and who he is now isn't a finished product. I'm an optimist fan, and I felt like Burks had some Dwyane Wade like properties. (Lots of numbers in this post from July 16th) Yesterday David Locke, a realist professional, felt like Burks essentially was Larry Hughes. (Near the 11:45 of this video) Now I know that right now Burks is not D-Wade. And I can assume that Locke doesn't expect Burks to remain at the "Rookie shooting guard" level either.

If there were two poles, it would appear as though the fan wants the best (duh), and the bball realist views things differently than a fan (also duh). The question is, though: Is Burks more similar to a guy who is going to average 25 ppg for his career, or 14 ppg? Please answer this question honestly, without doing ANY research into the topic. (Hint: I've done the research and I'm going to post the results in the afternoon) 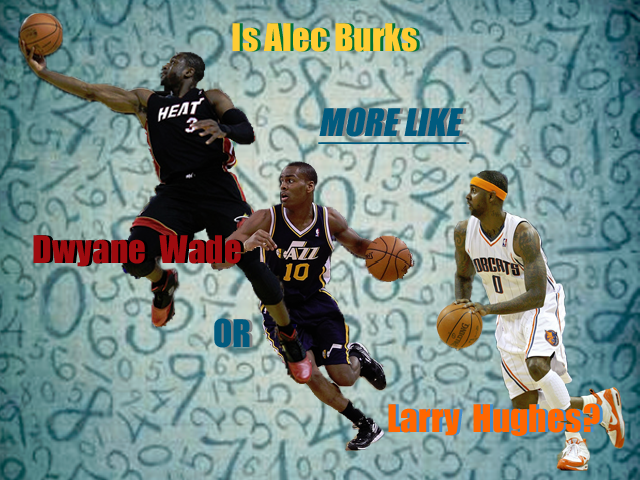