[Ed. Note: Yes, ladies and gentlemen. The game to watch for the Gamethread is going to be Game 1 of the 1998 NBA Finals. An overtime thriller where the Jazz win. I'll send the link out in the game thread. So just hang tight and don't go crazy. Also, the rest of this, and the following, updates are all going to be written as if this is happening now.]

This is the first game of the NBA Finals. The Chicago Bulls clinched the Eastern Conference title on May 31st with a Game 7 victory over the Indiana Pacers. With only two days off to prepare for the NBA Finals it would appear that the Utah Jazz, who finished off the Los Angeles Lakers in four easy games back on May 24th, have the edge in rest. Or would that be rust? We'll find out. 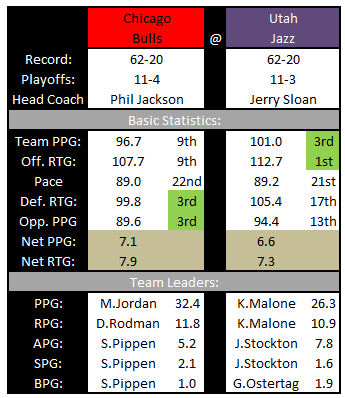 The Bulls are a fantastic defensive team, with the game's premier perimeter threat in Michael Jordan. The Jazz have the game's best offense, and are led by John Stockton's surgical precision. We know that it's more than just two players going at it. We know the other team very well, and not just because the Jazz swept the Bulls in the regular season this year (back on January 25th, and again on February 4th), but because we played them in the NBA Finals last year. (Like anyone could forget that though . . . )

The question here is all about history. Specifically, which history is more important. The Chicago Bulls are in the History books and Michael Jordan is chasing his 6th ring, one more than the Lakers Magic Johnson. And the Bulls beat our very own Jazz in 6 games in the 1997 NBA Finals. For the Utah Jazz they would like to focus more on recent history, and make the failure of last season be ancient history. This season the Jazz did sweep the Bulls in the regular season. In Jan, in Chicago, it ended with a 101-94 Jazz victory. And in Feb at home the Jazz cruised to a 101-93 victory. (Yes, one extra defensive stop = cruising) Michael Jordan got his points (36.0 ppg avg), but for the most part is was the Jazz defense flipping the script on the defensive Bulls, as only Jordan scored. And as a team, the Bulls shot only 42.7 fg% against the supposedly porous Jazz.

On the other side of the ball the Jazz still averaged 101.0 PPG vs. a defense that for the season only allowed 89.6 ppg. Nice job, Chicago! For the Jazz it's all about Stockton and Malone. John has averaged 14.0 APG, and Karl 32.5 PPG. In both games the Jazz bench killed the Bulls' bench.

Ultimately, though, History is written by the victors. The Jazz have the mental edge here, having home court and having swept the Bulls in the regular season. But the Bulls kicked out butts in the NBA Finals last year. Whomever wins will have the last say for sure.

It's Game 1. The Jazz are rested, and at home. The Bulls fought a hard series (7 games) against a determined Pacers squad. They will be tired, but most likely sharper. The Jazz guys got to rest quite a bit after wiping the floor with the young Lakers. The team they face tonight will be the opposite - a veteran team that's been here before.

I don't want to repeat myself too much from my Series preview that went up yesterday. [Ed. Note: There is no series preview. This is just keeping in character] Whatever I said there for the series also stands for this game. Game 1 is the most important game though, as the team that wins the first game of the Finals usually wins the series. Yes, that doesn't mean much against the Bulls, they lost Game 1 vs. the Lakers back in 1991 and still won the series. But we're not the old Lakers, we're a very balanced team of vets and youth.

Plus we don't have any Valde type players on our team.

For this game though, if the Jazz stick to the plan that has worked so far, it's to put Jordan into that Hero mode and try to beat the Jazz by himself. Jordan is averaged 5.0 apg vs. the Jazz this season in addition to his monstrous scoring. But I doubt that at his age he can beat us by himself. If the Jazz keep the Pippens, Harpers, and Kukoci in check (I don't know what the plural of a Kukoc is) things will go our way.

The Bulls killed it on the offensive glass against the Pacers, who saw that coming? If the Jazz take care of their rebounding they'll be fine. All indications suggest that we'll keep doing that. IF we can keep Shaq off the glass we can keep guys like Rodman off the glass as best as anyone can hope to contain the worm.

More than anything, though, this is the game where Karl has to show the world that he's not a secondary guy. He deserves to be here, not Barkley. He did it as the first option. And he carried our team for stretches of the season. If he plays his game, instead of the jump shooting game, we'll take control of this Game 1, and the series.

Joining us today is "Boulssssroool23" from the Chicago Bulls blog "WannabelikeMike.com" to give a few words from his side of the court:

Thank you so much for that commentary. We'll be sure to visit your blog here and catch up with you after the game!

For the Bulls I think it's obviously Toni Kukoc. He's tall, he can handle the ball, make smart plays and score in so many ways. I remember him being a big problem in the last NBA finals. For the good guys, it's obviously Bryon Russell. He really grew up this playoffs, and if he keeps playing big he'll be "that guy" that the Bulls did not plan for. If his three is falling, I'm calling this game early.

I don't know how, but all signs point towards a Jazz victory in Game 1 of the NBA Finals! 12 wins down. 3 more to gooo!