NBA 3 on 3 Tournament: Why the Utah Jazz team will beat their 1st round opponent

Share All sharing options for: NBA 3 on 3 Tournament: Why the Utah Jazz team will beat their 1st round opponent

If you were following along the last few weeks you may have noticed that the SBN Network is doing a 3 on 3 tournament. It took a while, but we finally have our team. First you voted for who should be the 1st, 2nd, or 3rd pick. And then you voted on which team you'd want to see represent the Utah Jazz. Steve Perrin set this all up, and every blog in the network put out their 3 on 3 teams. (Full list here) Because this resolves to only 30 teams, there were 2 extra teams made for the tournament, a "random bunch" for both the East and West.

You can check out the basics here:

The rules of the hypothetical tournament are straightforward:

- Half court,
- two and three point baskets,
- free throws on shooting fouls,
- bonus after seven fouls,
- losers outs,
- clear change of possession to the three point line,
- one ten minute period or first to 31,
- best two out of three.

Note that these rules are a slight departure from the official format of FIBA 3 on 3 tournaments, most notably in the scoring (where the FIBA format is one point for field goals inside the arc and two points for field goals outside the arc) and the fact that FIBA teams consist of four players. However, for the purposes of running this hypothetical tournament, we felt it would be easier if the scoring followed NBA rules and there were no substitutes.

You can check out the bracket here. And, to be fair, I think that our group of Gordon Hayward, Alec Burks, and Derrick Favors can excel with these rules. Well, Steve also set up the draw . . . . and as luck would have it, we drew the "nonsense" team. Who is on this team? None other than:

First of all, that it some legitimate b-o-u-l-s-h-e-e-t. Second, check out after the jump WHY I think our team can beat this nonsense, imaginary team.

The teams seem a little unfair. I'm not gaming the system here, I can't. The system was made up to add three All-Stars who have never played with one another before or have any ties to one another save for conference. Perhaps it would have been better to make a 3 on 3 team made up of Western Conference Free Agents instead? Keep this in mind for next season if we do that.

One squad has three All-Stars with lots of playoff and/or international experience going up against three guys who can't even rent a car yet. One team has two double double bigmen, and the other has two ball handlers. One team has experience. The other has youth. There are a lot of disparities between these two teams. And frankly, this match-up is going to be all about exploiting these differences.

But before we go into the reasons WHY the Jazz team are going to win . . . let's go over some basic information first.

These are three really good players, but they are far from perfect. And let's also not forget that none of them have played together before. No matter how you spin that, that IS an actual disadvantage.

First of all, this team is big. Gasol is the only real rim protector (serious, Z-Bo only averaged 0.2 blocks per 36 minutes last year, which is in the same neighborhood as both Harden and Burks). But both Harden and Randolph know how to get rebounds. Defensively Gasol can hold his own against his man, or on help defense. On offense everyone can face up and score - even the big guys CAN hit threes. If there was an offensive plan of attack it would be to either run a pick and roll with Harden as the ball handler, or to post up whomever is defending the second big on a given play. The x-factor would be the ability to score with a big taking jumpers if Favors does not follow him out of the paint. Expect to see a lot of pick and pops from this group.

I guess it is ironic the fans here voted for these younger guys who were more traditionally divided with a ball handler, a do it all, and a big - instead of going with one guard and two bigs (Mo Williams, Paul Millsap, and Al Jefferson). I think that Mo-Paul-Al team can beat this team, but wouldn't be able to handle a Tony Parker / Manu Ginobili / Tim Duncan squad. Though, it's going to be tough for our youth squad to even advance that far because of this crazy draw we got.

Well, while the other team is big and has experience, this team is faster, more athletic, and hungrier. Alec Burks and Gordon Hayward can, and will, both take turns handling the ball - while the pressure will always be on Harden for the other team. This will also allow the other to spot up or cut - which MySynergySports tells us they are both great at doing. This team isn't going to do the boring, predictable post seal, post up, and watch offense that they would HAVE to if they went with the Mo/Paul/Al team. In fact this team is going to be way more unpredictable in how they play on offense, involving a lot of dynamic screens, cuts, and passes. Burks can iso, drive, spot up, pass, and create his own shot. So can Gordon. Favors is the only non-"Go To" player out of the six, but he plays within himself. Defensively things are going to be funneled into Favors. This is similar to how the other team will do the same thing with Gasol. The difference is going to be on rebounds. The bad guys can use muscle to get the defensive rebound. Our guys are going to have to use speed (Burks), and length (Hayward) to accomplish the task. The overt offensive plan would be to pick and roll the other team to death with either ball handler and Favors. The X-Factor will be our team's ability to use the speed advantage against their size advantage. As this is a half court game transition is out of the question. It's that much more important to get rebounds -- but the one major advantage we have with the speed in a half court game is the ability to draw fouls. The PER 36 mins results for Jazz FTA is 14.7, while the bad guys is 15.0 FTA. Harden will draw his share, but the Jazz speed especially off of pick and rolls will have to put the FTA advantage in our favor if we're going to win.

Rules Quirk that needs to be exploited:

I'd love to go into how great the Jazz are in Synergy when it comes to cuts on offense, and spot ups . . . and how great they are on defense . . . but this isn't the time for that. The judges are going to vote this specific way in a fixed contest (seriously, random team with three all-stars?), but I know the biggest point is that the Jazz guys will not go down without a fight. This isn't Josh Howard / Al Jefferson not even trying to play defense here. These are three guys who don't like to lose, and three guys who all the experts will pick against.

In this hypothetical match against an imaginary All-Star team the young Jazz guys will play with no fear, and play to win - because everyone expects them to lose. Gasol whines after every call or non-call, Z-Bo was on Isiah's Knicks and does not have the heart to win. Harden is a great player, but he can't do it alone.

Even if the experts pick against our Jazz, I know that each game will be highly contested. And we're going to win. Calling the upset.

Because the Jazz play best when they play guys with heart who play defense against public opinion. After all, we've seen this before . . . 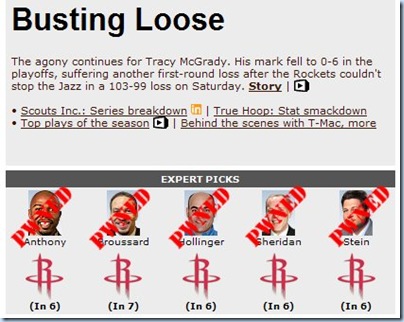 Additionally, when you SBN big-wigs try to see who wins this match-up, think kindly of this young Jazz team, this young Jazz blog, and of how much work we've put into it. We shouldn't lose to a team that HAS no blog in this fight. Right? A lot of randoms will vote on this match- up without actually having SEEN these three guys play. So . . . here are their respective vids from last season.