Share All sharing options for: Jazz 2012-13 Roster: Taking a look at some old predraft combine values for lane agility and maximum vertical reach

Okay, I get it. I'm horrible at these titles. That may be true, but let's just move on to this fun set of observations with data that is both out of date and incomplete. This data is from the predraft combine for each respective player -- which is great because it could be as recent as 2011 or 2010, but also horrible because it could be from 2001, which is more than a decade ago. These values are also incomplete because not all the Jazz players we have ran through all the drills and tests. For example, Kevin Murphy did not get tested for maximum vertical reach. Mo Williams and DeMarre Carroll didn't get tested for maximum vertical reach, NOR did they get tested for their lane agility speeds. Furthermore, guys like Raja Bell and Jeremy Evans didn't even go to the predraft combine at all. So we're working with 11 of the 16 possible guys. (Sorry Ante Tomic fans, don't bother . . . )

In addition to the data being out of date and incomplete, the data that reflects reality has changed. Guys like Al Jefferson have gotten stronger and quicker. Guys like Paul Millsap have learned how to jump better. And guys like Jamaal Tinsley got older and had a number of nagging injuries over the years. That said . . . the data we have is still fun to look at, at face value.

So, then, why look at lane agility speeds and maximum vertical reach? Well, last season the Utah Jazz got eaten alive when trying to defend the other team when the other team ran a pick and roll, or ran guys off cuts. The fundamental part of defense is being able to stay in front of your man. That said, it's absolutely necessary to adjust to what's happening on the court, and help your team mates out. This means you have to be able to switch quickly, often, and be able to pick up your teammate's man at different stages of the game. (Particularly when the run guys off of cuts and pick and rolls)

The Lane agility test is a timed test where a player has to hit a number of spots in sequence -- which attempts to measure their side to side quickness and ability to move and react while changing direction. The Maximum vertical reach is more simple, it's how high you can reach off of a running start to a jump. This is more for the pure fun of seeing who can get up and contest shots (this doesn't come into play much when you are finishing a contact layup, or getting a rebound -- but when making a running jump you can see how large your potential 'swat range' is). Quickly moving in another direction and jumping off the wrong foot may mean more in terms of in-game. But forget that, I just spent an hour working on this.

So Randy Foye is fast, and Al Jefferson is slow. I guess this is what we learn about our team in the off-season. Great job, Amar. Take a lap and then hit the showers.

The cool graph you all knew was commin': 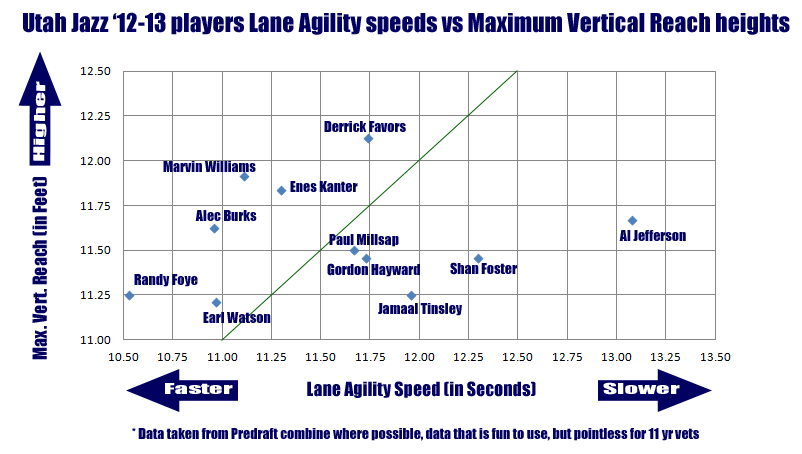 Yeah, D-Fav is quite ahead of the curve (straight line, whatevs). But young, uninjured Marvin was a physical beast as well. Young Randy was super fast, I'd love to see how much of that he still has in the tank.

Again, this information is incomplete and out of data. Guys got older, stronger, injuries happened, some guys aged, and are on the down side of their physical careers. That all being true, "haw haw" (Nelson voice from The Simpsons), look at how slow Big Al is! No wonder he's so great at defending pick and rolls . . . good thing we play him all day long.

Actually, when you try to apply this to the game you can figure some things out. Big Al is big and slow, so if you are the Jazz -- you need everyone else around him to be that much MORE mobile. Pairing Al up with slower guys is a force multiplier in failure. Favors is the cream of the crop here in terms of athletic ability for a bigman. He gets up the highest (again, out of everyone we have data for), and is pretty darn quick for his size. Alec and Randy should be great in the same backcourt with their quickness. Randy is older and a vet. Alec is tenacious. I'm excited to see them vs. the pairings we had last season at times (Jamaal and Raja . . . . seriously?).

I need to know how much Marvin has left in the tank, because if he can move well on defense that really helps us out. I suspect he's going to play a little more minutes per game than a little less minutes per game, if you catch my drift.

Most interesting to me is Enes Kanter. He's big, and more mobile than we'd expect. He is also one of the longest guys on the team with the third highest reaches. He's a grounded guy, and his defense is always going to be more of the "below the rim kind", so I don't see him moving to cut off a guard coming off a pick and swatting shots away. But he does show me he has the quickness to stay with some of them if he guesses correctly.

I'm not worried about 'Sap and The Precious. They are both need that green line of equivalency. Hayward and Sap BOTH work out at P3, and are smarter more than they are athletes. They are still legit athletes though. But defense really is about the mind.

Can we suppose there's a relationship to being quick and long, and how that may help you play defense against the pick and roll and cutters? I think we can -- but we need to go a little deeper and cross reference THIS static data (static for this purpose) vs. the scouting data of their actual defense.

If this is more of the kind of thing you'd want to read here -- tell me. If it's not, suggest something else for me to write about?