To even get to the NBA, let alone to become a star or a champion, you have to really want it (or be really tall and in a country that has poor scouting facilities). To make it to the NBA you have to be pretty elite. And to make it to such a high level in any organized structure (be it the NBA, other sports, or other professions) you have to work really hard. You have to make sacrifices. You have to "want it more". A career fringe guy, Blake Ahearn, has bounced in and out of the league and other, lower leagues, his entire post-collegiate life. He may not have the physical gifts, or practiced skills to be elite, but I don't think you can question his desire. How many of us are about his size who never even MADE it to play in college? He's made it to the NBA.

The baseline NBA player wanted it bad enough that they did what they needed to do to get here. But within the NBA if you look closer you have a whole other internal structure where the most competitive guys eat the lunch of the guys just happen to be there. When the going gets tough, when the fire is hottest, that is when you find out what your favorite players are made out of.

Do they fight tooth and nail and never give up, even when there would be no honor lost if they did? Or do they concede the series in the middle of it, and fail to get back on defense and hustle in close games? Let's get into it and name names after the jump . . .

First of all, props to the voice of the Jazz, David Locke for the idea of this post. He was talking about an interview Kevin McHale had and McHale rapped a bit about the different tiers of players. Some guys do want it more, and work harder -- nonplussed by early set backs. Eventually they will break through. (I guess Kobe Bryant air balling those threes vs the Jazz counts as this). Some guys think they are hard workers, think they "are there", but really are not. You can't really tell those guys anything. Rounding out the group are guys who are legit hard workers, but fold like a house of cards. Locke describes this concept in detail when he transitions from talking about Chris Morris and the disappointment he felt towards his inability to work out here.

If you want to just skip to the 7:00 minute mark you get a great run up into this topic; however, you should be watching these videos in full and subscribe to Locke's channel. And, like I said, watch all of his videos -- even the ones where he isn't talking about how much fun Moni's blog is. (I know, I get it. She's cooler than SLC Dunk! No need to rub it in!!) So to recap, McHale believe that you can categorize players as:

I'm a big fan of trying to get into player's heads. Motivation and behavior are two of the biggest things for me. I think we can agree (from the point before the jump) that to get to the NBA you have to have pretty good motivation. What your motivations are, however, may not be as noble or high minded as playing to get better, and be a champion.

Only the best have it.

My Take on the Tiers:

If we had to look at our roster, and divided up into those three groups, how would you do it? How do you rank our players? How do you perceive our team, on the psychological level?

For me, as a Cognitive-Behaviorist, I think that personality (as expressed action) is a product of learning an experience. As a result, these ranks (Tier I, II, or III) are not static. As players get older, as they age, as they meet certain goals, their directions may change. These tiers aren't hard-linked to success either. You can be a Tier III guy, but still be a bench player. You'd be a bench guy with a lot of fight in you, though.

How do I see our team?

I think the easiest thing to do is isolate the most rare component . . . mettle. This is what makes you a Tier III guy. That guy who fights through adversity and makes it. I think it's fair to say that Paul Millsap is the perfect guy to demonstrate this. Guys like Millsap are going to be Tier III guys. Tier II guys are a bit harder. They are good, but they aren't mentally killers. Or maybe they were there -- but they are transitioning to something else? I think Al Jefferson is a Tier II guy -- he's clearly a hard worker, he's clearly a solid player, and he clearly did not have that fighter's edge by his comments in the playoffs, and his play in that elimination game (which was STILL a home game, btw). Tier I guys are the failed states of the basketball league of nations that is an NBA roster. Because I believe their Tiers are dynamic, right now, you'd have to call Raja Bell a Tier I guy. He's a hard worker, and he's tough. But right now he's not dealing with an obstacle or challenge in a positive way.

Because of this dynamic nature . . . I think that these three tiers communicate with one another, and it's not a sequential thing where you go from Tier I to II, and then II to III. 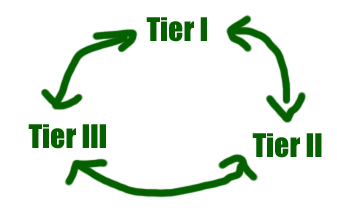 Believe it or not, I loaded up photoshop to make something that looks like it came out of Window's 3.1 MS Paint.

I can go into more details in the comments if you ask me. I'd love to get into a big dialog about this. We've wondered about toughness before (right Delonte West?) -- but I think if we break down personality into more traits we may better categorize our team. Again, the categories don't mean you don't care, and they don't mean that you aren't a good player. It's just about motivation, toughness, and mettle here. This is about personality, and perseverance, not production.

How do YOU see our team?