Murph is playing minutes for Reno right now, but he's scoring points with the Jazz.

I'm almost certain that we're not ALL watching the NBDL games Kevin Murphy plays . . . even though every single one of them are available for free online at YouTube.com because of the NBDL partnership with the popular media website. Because most of us aren't I thought I just update you with the stats of his action in the 11 games he's played so far (started in 9 of them). The Jazz aren't letting him go Morris Almond down there, and Murphy has the tools to do exactly that as the former "only option" on a small school tendency. 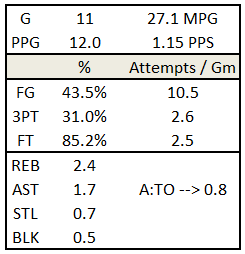 Basically, he's doing okay. He's doing a bit of everything and this is important because:

and c) It is clear that life for him must be really hard because he has a newborn that he's so far from right now, and that must suck. That's a super stressful situation to be in and can only be negatively affecting his performance. But he's fighting through that.

All things considered I think he's doing okay. And that's what we want from him. And he'll only get better by playing more at this stage of his development. And with Reno he's getting a chance to do exactly that. Keep it up Kevin, and you will find greener pastures back in the NBA.