That Jazz are running out of time to trade either Paul Millsap or Al Jefferson in order to receive any return value. While in years past teams and players often worked together to finalize sign-and-trade deals that benefited both the teams and the players, the new CBA rules have taken away almost all incentive to do so in the future. Accordingly, unless either is moved now the Jazz risk losing both for nothing this July.

Share All sharing options for: Why the Jazz Cannot Wait to Sign-and-Trade Millsap or Jefferson in the Offseason

The NBA trade season is in full force and the rumor mill is in full effect with the league trade deadline now just over 5 weeks away. On January 15th, the last of the major trade hurdles (most restricted free agents will be trade eligible after that date) for trading players currently on NBA rosters will have been lifted, thus making virtually every player in the NBA eligible to be moved at their teams' whim (Disclaimer: There are a handful of players whose contracts require player consent to any trade).

As a result of the Utah Jazz's current collection of productive veterans, expiring contracts, young prospects and draft assets, the Jazz will no doubt be seen as a major mover and shaker in any trade. That being said the Jazz have insisted that they do not feel compelled to make any trades at this time and there is a growing thought amongst the media and fanbase that the Jazz may wait until this summer and utilize their assets in sign-and-trade transactions instead.

Unfortunately, for the Jazz a combination of much stronger restrictions placed on sign-and-trades in the NBA's newish Collective Bargaining Agreement (the "CBA") and a plethora of teams projected to be below the NBA's 2013-14 salary cap, makes any sign-and-trade for Utah's veterans this offseason almost entirely unlikely.

A Veteran Free Agent and his Prior Team may enter into a Player Contract pursuant to an agreement between the Prior Team and another Team concerning the signing and subsequent trade of such Contract, but only if:

(i) the Veteran Free Agent finished the prior Season on his Prior Team’s roster,

(ii) the Contract is for at least three (3) Seasons (excluding any Option Year) but no more than four (4) Seasons in length,

(iv) the first Season of the Contract is fully protected for lack of skill,

(v) the Contract is entered into prior to the first day of the Regular Season,

(vii) the acquiring Team has Room for the player's Salary plus any Unlikely Bonuses provided for in the first Season of the Contract.

Notwithstanding anything to the contrary in the preceding sentence, commencing with the 2013-14 Salary Cap Year, a Team shall not be permitted to acquire a player pursuant to a Contract entered into in accordance with this Section 8(e)(1) if the Team’s Team Salary following the proposed transaction would exceed the Tax Level for such Salary Cap Year plus $4 million. If a Team acquires a player pursuant to this Section 8(e)(1), then the Team’s Team Salary at all times thereafter during the Salary Cap Year may not exceed the Team Level for such Salary Cap Year plus $4 million."

Phew, now that was a convoluted mouthful. After reading all that you now know what my day is like. Let me break that down a bit and point out the rules of special interest to the Jazz..

(i) the Veteran Free Agent finished the prior Season on his Prior Team’s roster,

This restriction does not really affect Utah this offseason, but this is the rule that prevented the Jazz from any sign-and-trade of Andrei Kirilenko last offseason. It is commonly referred to as the Keith Van Horn rule since once upon a time the Nets signed Van Horn out of retirement in order to have the required player salaries to complete a trade with the Mavericks.

(ii) the Contract is for at least three (3) Seasons (excluding any Option Year) but no more than four (4) Seasons in length,

Alright, now this is a very important rule change for next years Jazz. This provision must be read in connection with CBA Article VII, Section 5(C), which now restricts the maximum annual raise a signed-and-traded player can get to 4.5% per year, which is the same raise that a player can get if he just straight out signed a new contract with a new team. The prior version of the CBA allowed teams to re-sign such players for 3 or more seasons and give them the maximum amount of annual raises (which is 7.5% annually in the new CBA). Since NBA teams could sign their own free agents to an additional contract year and give them larger raises than other teams can, the CBA previously allowed players to earn longer and larger contracts in sign-and-trade transactions.

At this point, with no financial incentive for a player to work on a sign-and-trade the only incentive a player has to work with his former team is to select his destination if his desired team has no salary cap room. But that option has also severely been impacted as I will discuss below.

Notwithstanding anything to the contrary in the preceding sentence, commencing with the 2013-14 Salary Cap Year, a Team shall not be permitted to acquire a player pursuant to a Contract entered into in accordance with this Section 8(e)(1) if the Team’s Team Salary following the proposed transaction would exceed the Tax Level for such Salary Cap Year plus $4 million. If a Team acquires a player pursuant to this Section 8(e)(1), then the Team’s Team Salary at all times thereafter during the Salary Cap Year may not exceed the Team Level for such Salary Cap Year plus $4 million.

The concept mentioned in the preceding paragraph is completely new to the 2011 CBA. What this means is that teams who have salary over or near the Luxury Tax will almost never be able to complete a sign-and-trade transaction. Additionally, teams that are able to complete such transactions will place upon themselves a hard cap that will restrict the other roster moves that team can do to improve its team.

Alright, let me add some color to this. The Luxury Tax amount for 2013-14 will not be known until about July 9, 2013 but it is assumed to be somewhere around $71m. For the purposes of this rule then, no team can complete a sign-and-trade with the Jazz if after it was completed, that teams total salaries amounted to more than $75m. Without a number of additional cap maneuvers this will effectively bar many of the teams that may be interested in acquiring Millsap, Jefferson or even Mo Williams in a sign-and- trade transaction.

For example the Los Angeles Lakers (even before re-signing Dwight Howard) will be at around $85m in committed 2013-14 salaries. Assuming they'd want to re-sign Dwight to around $20m per year and then trade Pau Gasol ($19m) to Utah for Paul Millsap under a more reasonable contract at about $8-10m per year, that would leave the Lakers with at least $94m in committed salaries. So in that case the Lakers would not be allowed under the CBA to make that trade with Utah.

The other more practical reason a sign-and-trade will not happen is due to the vast amount of teams that will be (or can be with simple renouncing of player rights, etc.) below the salary cap this summer. The following table is prepared to show the teams that are estimated to be below a hypothetical 2013-14 salary cap of $59m, and also the teams that are at or near the Luxury Tax line and thus will be mostly barred from making large sign-and-trade moves. 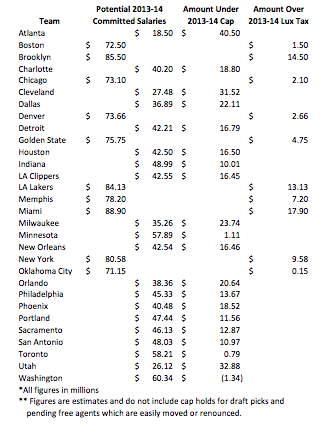 Assuming that Jefferson and Millsap all would earn around $10m per season, the table shows the following 15 teams which would likely be able to have or create enough cap room to sign either guy without having to provide any compensation to Utah: Atlanta, Charlotte, Cleveland, Dallas, Detroit, Houston, Indiana, Milwaukee, New Orleans, Orlando, Philadelphia, Phoenix, Portland, Sacramento and San Antonio. The following 10 teams are either at or near the Luxury Tax line and thus would be very difficult (if not completely forbidden) to make a sign-and-trade with: Boston, Brooklyn, Chicago, Denver, Golden State, LA Lakers, Memphis, Miami, New York, Oklahoma City.

Conclusion: While some fans may hold out hope that the Jazz can get some sort of decent value out of Jefferson or Millsap, the reality is that unless either guy is traded prior to the February 21, 2012 trade deadline, the likelihood is that one or both will walk away leaving the Jazz with nothing to show for it. While the former CBA had many reasons for the players to want to work with their former teams to reach their new destination, the new CBA has severely limited those teams and any incentive players (and their agents) have in negotiating such transactions.