We love the Utah Jazz. One thing which people are no longer on the fence about is Tyrone Corbin. I have a big piece on this topic coming up "soon" . . . but it may surprise you what I have to say. Before we get there let's look at something simple -- the minutes per game (MPG) change by our wing players over the last few months. Of course, not every player plays in every single game. And of course, not every single player is even playing at their best position anymore. But . . . it is fun to see the change in mpg for Randy Foye, Gordon Hayward, Marvin Williams, DeMarre Carroll, and Alec Burks. 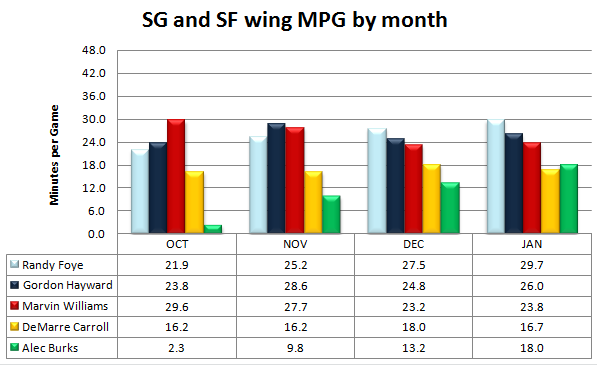 The two guys who are going up every month are Foye and Burks. Which is hilarious, because on paper they should be competing against another for SG playing time. They're both getting time elsewhere.