Lies, Damned Lies, and a look back at the 2004 Detroit Pistons Championship Team

Share All sharing options for: Lies, Damned Lies, and a look back at the 2004 Detroit Pistons Championship Team

In the NBA it's easier to win if you have a star. You sell the jerseys, you get the better TV deals, you get an easier schedule, and you get the benefit of the doubt calls in the playoffs. You get a star through free agency, trades, or the draft. You can win without a star, of course. It's just much harder. The Jazz have only one option to get a star out of those three, well documented and well understood conditions: the draft. Getting a star through the draft is hard if you only get high draft picks in weak drafts. I get that. It's hard to be bad enough at the right time if you are consistently trying to be the 8th seed in the playoffs. As a result, Utah Jazz fans are fed the pablum that we're modeling our team through the "non-Star" method of success. In recent history the only team to be dubbed a successful team with no stars was the 2003-2004 Detroit Pistons team. We face that franchise today, 8 years removed from their banner year, their third championship in franchise history.

Of course, it's really a lie though. That Detroit team wasn't a team of no-stars. It wasn't a collection of marginal talent. It was a team precisely built for the playoffs in a rough, physical, Eastern Conference. In fact, that core went to the Eastern Conference finals 6 times in 7 years. As a point of reference, our best Utah Jazz teams only went to the Western Conference finals 5 times in 7 years. That Detroit team was a collection of guys who were really good basketball players, and while the recognition of that became greater AFTER they won a title -- they were by no means a bunch of 'also-rans' before. They were good players. They were always good players. And they had the hardware to back it up. 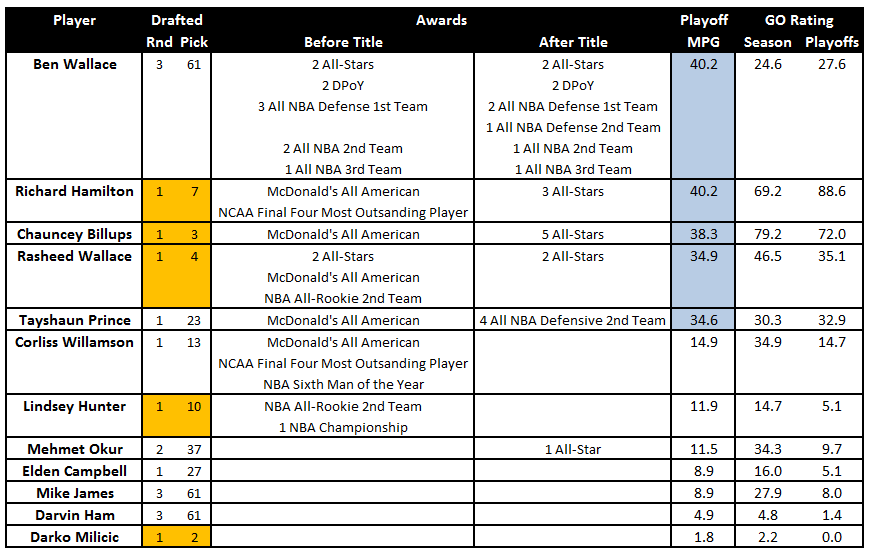 (Also included are the Go Ratings -- which is exactly what I expected. This was a defense first, second, and third team. Go Rating is only offensive stats. Picked 3rd round, #61 = undrafted)

That team turned it on in the playoffs, by turning up their defensive intensity. Every single person on that playoff roster (except Mike James) was a better than average to AMAZING defender. That team was all about defense. Our current team is based around offense, and our playing time and rotations seem to be based on attempting to maximize offense; and defense is a complete afterthought. But this is a tangent, but still evidence about our team flat out lying about how they are building a team LIKE this 2004 Pistons squad.

The main point here is that the top 6 or 7 guys in terms of playoff MPG were all recognized as being legit NBA players before the title. Five of the 12 man roster were Top 10 NBA draft picks, and one of them was Darko Milicic, and he was regarded as a bust. Six of these 12 guys were lottery picks. (Corliss Wilamson was not cell shaded in gold) So that's half their team. Three guys went undrafted, but proved their worth in the development leagues at that point in time. One of them, Ben Wallace, was already so obviously dominant before the title that his stature -- even as an undrafted player -- cannot be questioned.

Some guys who were not undrafted had been on the radar for years and years. Richard Hamilton, Chauncey Billups, Rasheed Wallace, Tayshaun Prince, and Corliss Wilamson were all McDonald's All-Americans, two of them were NCAA Final Four Most Outstanding Players, two of them were on All-Rookie teams in the NBA, and one of them had won 6th Man of the Year.

But that's all nice and fine, but it's really the collection that matters. Anchored by Ben Wallace, the rest of these good to great defenders became better than the sum of their parts. And that only makes sense because Ben Wallace was a star before he won a ring. He was an All-Star twice, three times was All-NBA defensive 1st team, had two DPoY awards (had Wallace not won the title in 2004 he still would have won the award which does not take into account the playoffs), and was an All-NBA 2nd team dude twice. Ben Wallace was a star. He didn't score 20 a game (or the 17 that Al Jefferson does), but he was the anchor. He was dependable. He was regarded as a star. He played like a star. And he had the hardware of a star.

Rasheed Wallace, a mid-season trade brought him to Detroit, was a 2 time All-Star as well before joining the Pistons. So you had a starting lineup that he two bigs who were both defense first guys, who were both All-Stars twice before this amazing 2004 playoff run. Paul Millsap and Al Jefferson have zero All-Star trips. These guys had four. One thing is not like the other. The team the Pistons built inside is not like the team our front office is building.

What about the guards? Billups and Rip played great on offense in the playoffs -- Rip getting almost up there to a 90 GO Rating. That is like Deron Williams' Go Rating during our 9 playoff game win season. Billups was a great second option, who was poised, and clutch. I guess in an alternative universe that could be Gordon Hayward (Rip) and Alec Burks (Mr. Big Shot) -- but that's not happening here. What's happening here is Earl Watson playing big minutes while Randy Foye has one good game every 6 games. Again, one thing is not like the other.

How about Tayshaun? Dude was All-NBA Defensive team 4 times . . . but after the title. So this is the, maybe, one case where one of the 5 Pistons starters wasn't already awesome before 2004. But he still played great on defense with his long arms and as a part of a unit that shut down a lot of more fancy teams. (Couldn't Jeremy Evans be a great Tayshaun? Just on defense?)

Do you see anything in common here? They got a team concept together that was unified by defense. Defense wins championships. We know we're a bad defensive team. We're holding on for dear life to bad defenders. As a result, we still act surprised when we can't score on good defense teams and lose games.

To say that we are modeling our franchise off of Detroit's 2003-2004 team is a lie. It's pretty obvious. It's also a pretty big lie to say that the Detroit team from 2003-2004 was a collection of guys, none of them being a star. Ben Wallace was a star before his title. Billups and Rip played like stars in the playoffs on offense and defense. And Rasheed was an All-Star before joining the team as well. Half the team were lottery picks. Five were Top 10 picks. Five were McDonald's All-Americans. Two were NCAA Final Four Most Outstanding Players. But hey . . . none of the them were stars according to the "narrative" aka "the lies we are told by the Front Office."

Call me a bad fan for pointing out the truth. Call me a guy who should root for another team for pointing out the lies our front office sells as truths. But don't call me someone who doesn't do my homework. I have. I always have. I always will. It's call integrity. The 2004 Detroit Championship team was full of stars, was not starless, and is not the team we're building our current team around.

Or maybe I'm wrong. Maybe we are building our team just like that Detroit team, but are really really bad at it.