The Millsap Doctrine - The Downbeat #939

What is the correlation to production and increased minutes? Is Al awesome? The Jazz will get some help soon. And more!!!

Share All sharing options for: The Millsap Doctrine - The Downbeat #939

I was reminded of a great article that was written a few years ago about a concept called "The Millsap Doctrine." The Concept, written by Basketball Prospectus' Kevin Pelton and SBNation's own Tom Ziller is that bench players will not only keep up their productivity when given a larger role/minutes, but sometimes exceed it.

This piece should be required reading by Jazz fans for 3 reasons:

1. It is an awesome and insightful piece of work.

2. It was inspired by Utah's own Paul Millsap

3. It is super applicable to Hayward, Burks, Kanter and Favors, as it was to Paul Millsap

An excerpt from the article:

Millsap's success as a starter is an interesting case study in how players respond to different roles. Over the last two seasons, Millsap's per-minute numbers as a reserve behind Boozer were excellent. However, critics of statistical analysis are quick to point out the ways in which per-minute stats can be misleading in the cases of reserves like Millsap.

A little over a year ago, in the midst of one such debate, I helped Tom Ziller compile numbers for BallHype.com looking at the performance of reserves who, like Millsap, suddenly saw their playing time increase dramatically because of the loss of the player ahead of them on the depth chart. Conceptually, this study (based on a similar one done by John Hollinger in the original Pro Basketball Prospectus book) avoided the usual pitfalls of assessing performance based on playing time, namely that players naturally tend to play more when they play well.

Lo and behold, the data showed that these players tended to improve their performance when given more regular minutes, contradicting the critics' naysaying. There's a perfectly logical explanation for why this would be the case. Given more playing time, players have a chance to get warm and play through their mistakes instead of constantly watching the bench and waiting for their coach to pull them from the game.

To name the theory derived from the study, Ziller used one of its standout performers, a player who translated good performance in limited minutes into even better production as a starter. Fittingly enough, that player was Paul Millsap. Thus was born the Paul Millsap Doctrine.

Just go read it, if you haven't already.

Here is a mandatory look at our offense and defensive efficiencies as of today: 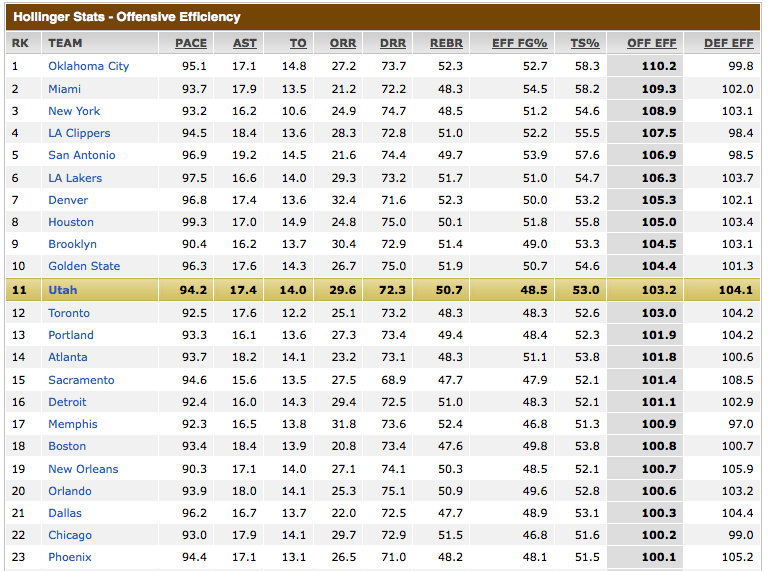 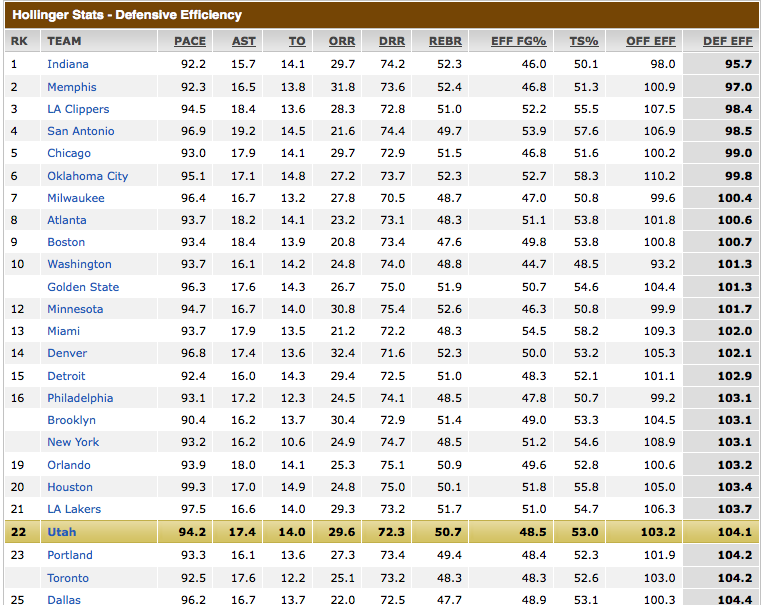 I may be wrong, but I think that this is the first time we score less than we give up on the season. Never fear, though. Help is around the corner. I'm talking about the schedule.

I would not call this season awesome. In fact, I think it has been fairly tenuous. I don't know how to explain it. There is a tension to the season that is sort of building in both the fanbase and the team. Don't get me wrong. I think the team gets along really well. But if you think there aren't 4-5 Jazz guys that are less than pleased with their role or minutes right now, you are kidding yourself. This displeasure won't necessarily lead to anything big, but I think it's there. In some ways, I do wonder if some of the Jazz players are more anxious and concerned about the trade deadline than the fans.

If you look at where the team is at, record-wise this season, I don't think there should be too many complaints. The Jazz are right about where we expected them to be. But for some reason, it just feels worse. That is the difference, in my opinion, between production and processes. If I told you that next year, you would acquire a million dollars, you would be very pleased with that result. But if I told you it was due to the death of a loved one and collecting their life insurance, well then the process has discolored the production completely.

Likewise, if I told you that the Jazz would lose to the Hawks in Atlanta, you probably shouldn't be too upset about that. But when you find out they lost after leading by 15 with 15 minutes left in the game, it changes things. The team is about where it should be record-wise, but I think some of the processes of getting there have tarnished the record some. That's my take.

Now for the good news: 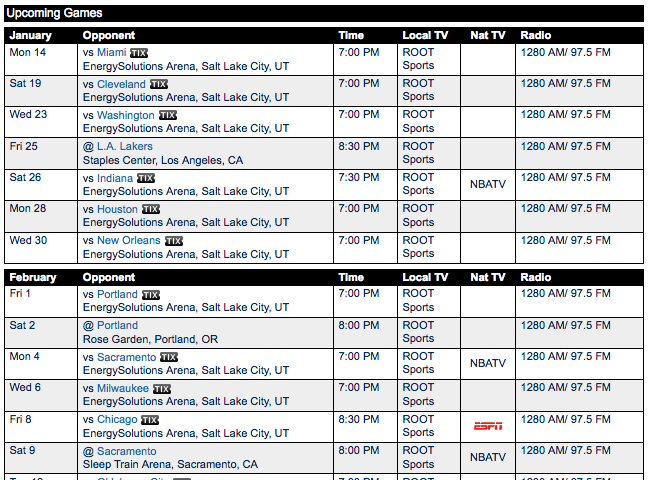 This is a list, courtesy of utahjazz.com, of the Jazz's next 13 games, with 10 of them at home. The Jazz are going to win 8 or 9 of these games. I'm not even jinxing it. They will. They play so much better at home and there are some sure wins in this list. In 3 weeks, the Jazz will be 4 or 5 games above .500 and firmly planted in the playoff picture. I still think they have the inside track to the 8th seed, when you look at schedules and what not. I mean, have you seen Portland, and more specifically their bench, play basketball?

Al Jefferson is simply one of my favorite basketball personalities. In a candid interview with hoopsworld recently, Al had this to say about the trade deadline and the fans in Utah:

"It’s my ninth year in the league man," Jefferson said to HOOPSWORLD regarding the trade rumors. "It’s just part of the business. My first couple of years in the league I used to be listening to the rumors daily and then I’d hear my name in those types of trade rumors. But this is my ninth year and its part of the business. There are things you’re just going to have to deal with. It’s just like you say they’re rumors, you know, so that doesn’t necessarily mean that they’re going to be true. It’s a part of the game."

"The great thing about Utah’s crowd is that they’re not just there to watch basketball, they know basketball," Jefferson said about his joy playing in Utah. "They’re on you if they know you’re supposed to be doing something that you’re not doing, but they truly support you. It’s a great feeling playing for them. It is good to play in front of people who know the game of basketball, who knows you’re not superman, can do everything or make every shot. Utah fans just want you to play hard and that’s something you can do, something you can control. It’s great playing in front of them."

The irony is that Jazz fans, including me sometimes, have come to require superhuman feats by Al Jefferson. We are super hard on him as a fanbase, in general. I do believe that it is best for the Jazz to move on from the Al Jefferson era after this season, but I also believe that Jefferson gets criticized unfairly by most Jazz fans and that his effort is almost always his best. He does help the team. You can argue how much and at what cost, but he is absolutely contributing to wins right now. Is Al so naive that he doesn't hear the unfair criticisms about his game, or is he just such a nice guy that he gives Jazz fans the benefit of the doubt? I like to think it is the latter.

Your crazy trade proposal of the day: