The Downbeat #941 - Foul Too Damn Much Edition

Where you stand depends on where you sit.

Share All sharing options for: The Downbeat #941 - Foul Too Damn Much Edition

We are very near the half way point of the season, Dunkers, and about time to start paying closer attention to where the Jazz's season is heading. Clark is the man that gives us the standings every week for offensive/defensive ratings, so lets look at some other categories in this Downbeat.

Right now the Jazz sit just outside the playoff picture. With a record of 21-19, they are technically tied with Portland (both 10 games back) and just .5 games back of Houston. 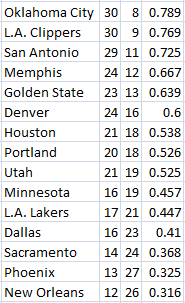 3PA: As many three's it seems that we've seen launched up, the Jazz are still 21st in the league for attempts. That's 391 behind the Rockets!

FTA: The Jazz have been awarded 987 FT's this year. That's 5th in the league. That's very encouraging, but its still almost 100 less than the league leading Lakers.

AST: 912- As much as we harangue on the Jazz for their ball movement and lament our lack of a pure point god, they're 4th in total assists.

ORB%: 29.9- That's 6th in the league. This means the Jazz are able to haul down nearly 30% of all available offensive rebounds. The leader? The Grizzlies at 32.2%

What does it all mean? The Jazz are performing fairly well on the offensive side of the ball. The could help themselves a lot by upping that FG% and by taking and making more three's.

Admit it, you heard duh- duh- duuuuh in your head when you read that.

OppFTA: 951- This is not good. Its the fifth most given up in the league. The Jazz still foul too damn much.

STL: 331- 5th place in the league for total steals, 79 behind the league leading Clippers

The Nerdy Stuff, a.k.a. When it Gets Ugly:

OppFT/FGA: .221- 6th worst in the league. This is an indicator of a bad defensive team. Assignments and rotations are missed, so either the responsible player or a superfluous player fouls. The Jazz foul too damn much.

Shot Locations: The Jazz allow 26 shots at the rim, per game. That's tied for 9th worst int he league. Compounding that is the OppFG% at that location: 65.5%, also 9th worst in the league. The Jazz need to protect the rim.

The last thing that needs to be looked at is schedule. The Jazz, as has been noted here, have had a tough schedule during the first of the season. They have already played 58.5% of their road games. From now until April 20th (4/20 huh huh), the Jazz have to squeeze just 17 road games into around 84 days. That's some major silver lining right there. Compare that to Houston and Memphis who have played 18 and 17 road games, and things are bound to do some shuffling.

Lastly, lets look at some of the Jazz player's individual performances:

FT: Paul Millsap is 14th with 149. Imagine if he got all the calls he deserves. Am I right?

BLK: Derrick Favors has 53 blocks on the year, puts him in 18th place. Larry Sanders is a machine with 116!

That's all, children. Hope you're not too cross-eyed from all these numbers. Now tell me what it all means?