Yes! Kanter and Favors can Pass!

I love beautiful basketball. I love passing, cuts, and speed. And so these two plays against Miami were really exciting to me. But besides the speed, it also shows that perhaps passing is in the future for Kanter and Favors — two guys not exactly known for their assists to date.

Share All sharing options for: Yes! Kanter and Favors can Pass!

Notice the play starts out with a very typical clear out for Al on the left block. Favors is fading away to give Al room, and Hayward is moseying over so he can get an entry pass to Al. 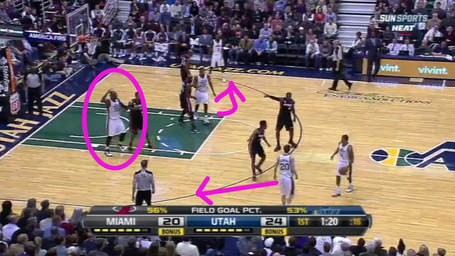 Next, Al is fronted and Hayward is guarded closely. Put it together and Hayward doesn't have a good look into Al. But that's okay. Because Favors sees this, reacts by moving to the free throw line, and something wonderful is about to happen. 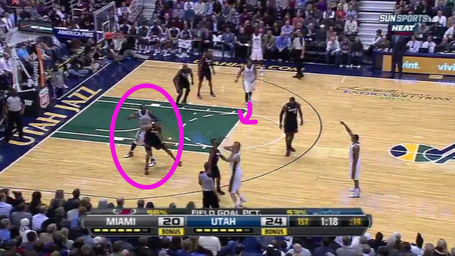 Hayward passes to Favors, and Al moves toward the open hoop. Favors sees Al moving and gets ready for a very quick pass. But what also strikes me is the rest of it. I wonder what if Earl could shoot 3's and was in the corner. I mean, with Al having a wide open route to the hoop, the help defenders are going to react, right? And if a defender in the corner rushes to the paint to help, wouldn't that make the corner 3 wide open? 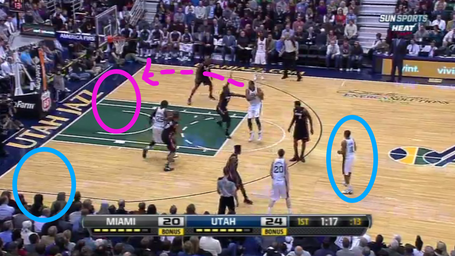 Now look at this! Of course Al ends up with a dunk because he does a great job keeping his body between the hoop and his defender. But notice what other options there are. DeMarre is wide open for a 3. The corner is wide open (and I think it's a reasonable assumption that if a guy was there, his man would be rushing to the paint to try to stop Al.

Really, this little play is a terrific one with lots really good scoring options. 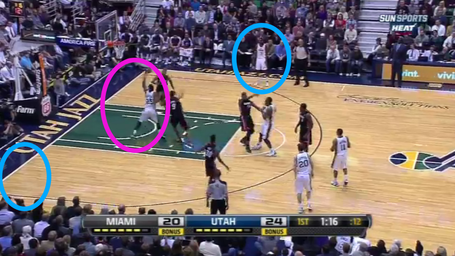 As a preamble, let's see again why Gordon Hayward is awesome. During the transition (and this isn't a fast break, it was a normal rebound after a missed Heat shot), Hayward notices that Wade decided to take a little break, so Hayward rushes to the open lane for a dunk. It could have been an alley-oop. It could have been a bounce pass and dunk. Earl just didn't see it in time or have the angle for the pass or whatever. But the Vanilla Cobra is awesome. 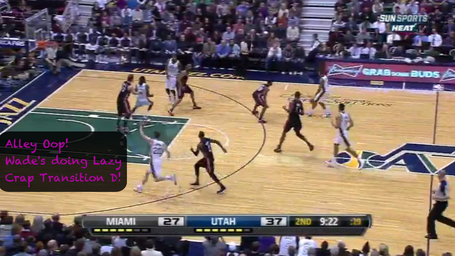 Now, on to the actual play. It starts just like the previous one: Favors is posting up, but he's fronted. Hayward is clearing out to the three point line to give room. Kanter notices the fronting and moves to the free throw line. 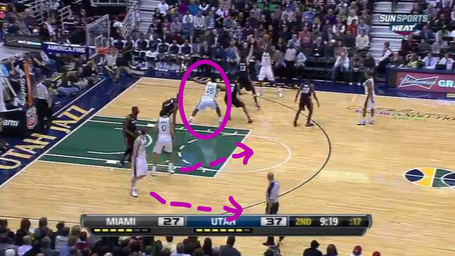 DeMarre then makes the pass to Kanter. Kanter's guy thinks: "Oh fiddlesticks! This Enes character can hit 15-foot jumpers. I must close in on him" ... which leaves an open lane for Favors to the hoop. Also notice Hayward again fading to the 3-point line while his defender doesn't care.

Also notice that the corner again has lots of room. I can't help but think that if Earl was changed into a PG-resembling-dude who could hit corner threes (maybe one a teammate once nicknamed "Corner Pimp"), then Hayward could set a screen to have that PG-resembling-dude hurry over to the open corner. Just to create more options. 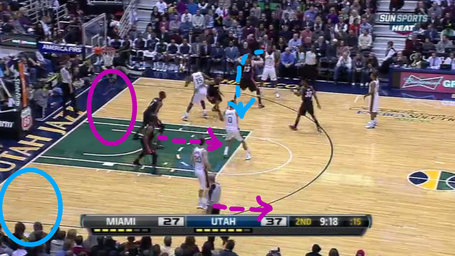 Now Enes gets the pass, but doesn't waste a second. He does a quick pass into Favors who has nobody between him and the hoop. But notice who else is open: Hayward! And the imaginary PG-resembling-dude in the corner. Lots of good options here. 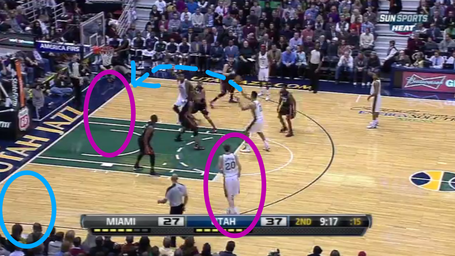 Favors, of course, makes the dunk. But DeMarre's open. Hayward's open. The corner 3 is open. If the help defense closed quickly, there's three opportunities for a pass out for a wide open spot-up 3. That's just good basketball. 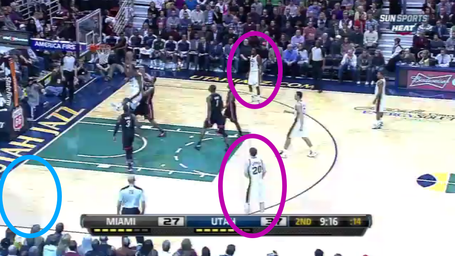 Here's the play in real time:

Both of these plays came about as a response to fronting the post guy. But I hope the team can make intentionally planned plays for the future. Both Favors and Kanter have quick spins, and I think could would work just as if they were pushed away from the hoop with their defender behind them. In this way, the original post up attempt would be kind of a decoy ... the real play is to go to the big at the FT line while the low block guy makes a quick cut to the open basket. At the same time the wings/guards move to spot up ... so they have an open shot if their guy reacts quickly enough to cut off the cut by the big.

This kind of play would, of course, depend on the big at the FT line being a threat to hit the jumper. Kanter, of course, is already pretty dependable with that. Favors isn't. I hope his work at the FT line eventually translates to hitting jumpers at the same spot with more playing time and experience.

But in the end, a good play is all about options, movement, and passing. And that's what both of these created. It also shows us that with the right game plan, our young bigs can be effective passers who help teammates get good shots.