Jazz Center Al Jefferson dominates the 3rd quarter, and he's coming for YOU!

It's the Halfway point for the Utah Jazz season -- and I'm going to go over something cool for each of our players, starting at the top with Big Al.

Share All sharing options for: Jazz Center Al Jefferson dominates the 3rd quarter, and he's coming for YOU!

For better or for worse the Utah Jazz playoff covered wagon is hitched to center Al Jefferson. Jefferson has improved his outside shooting and passing this year, while he has remained visually static in other areas he is deficient in. I feel no hesitation in stating that he's a middle of the pack first option, but would probably be the best second option on a true contender right now. He's not getting moved to a contender this season, and we're not getting a real first option this season either -- so, for better or worse he's the horse we're riding to the finish line.

The Jazz have not really started games off strong this season. Despite having a Top 10 offense, the Jazz are 21st out of 30 in 1st quarter points per game. Some of the blame has to go to Al Jefferson here if he's our first option and we routinely fall flat on our faces in the first. That said, the Jazz are 5th out of 30 in 3rd quarter points per game. The guys who play in the 1st quarter are the same guys who play in the 3rd quarter. And a lot of the adulation for our superb third quarter scoring has to go to Al Jefferson here. Why is there such a disparity? Is Tyrone Corbin that awesome of a motivator? Do our starters recognize that they have to 'bring it' after getting whooped early? Is it something else? I don't know.

What I do know is that Al Jefferson is dominating the 3rd quarter of games this year, and he's coming for you. And more seriously, he's getting better and better. We should just rename the 3rd quarter to "Big Al's kitchen" because he's cooking non-stop in the third. Behold:

Over all he's doing better in the 3rd quarter than normally when it comes to that thing that first option scorers are supposed to do, score:

He's not bad elsewhere as he's also bringing 3.4 rpg, and 1.2 AST+STL+BLK combined. Okay, that's not a lot, but he's at least scoring really well. And his scoring has vastly increased. He's gone from 45.0 fg% to 52.1 fg%, to 58.7 fg%. And his PPS right now this month is higher than I've ever seen it before. The only real complaint is that he's not going to the line more, but that's been one of the lingering complaints about Al forever. It just hurts more right now because he's shooting like Reggie Miller from the free throw line this season in the third quarter. It's gotten to the point that I assume he's going to make the free throw, which is something a fan rarely says about a Utah Jazz center.

And for a first option, that's kind of what you want.

I am a huge big nerd, please Amar, show me all the numbers: 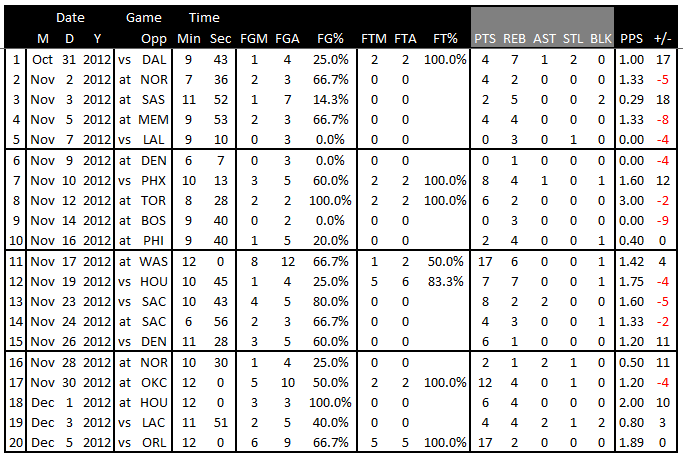 All numbers from popcornmachine.net, and while their archive isn't fully available, if you know html you can fish out the missing boxscores and game flow info.