Woot! Woot! The Jazz won after a five day layoff. You never know how games after a long break are going to go, well maybe we actually do since the Jazz have played two games in nine days! Its like the anti- lockout schedule.

This game was extra nice because after it we don't have to wait a week to see the Jazz again! The first quarter was much how anyone would expect it to be after nearly a week off. It was back and forth nothing too exciting. The second quarter is when the game got to be tons of fun. Man was it fun to watch the second unit!!!

When the kids entered the game the Jazz had a six point lead, that lead ballooned up to 21 freaking points! How the Jazz got the lead was very entertaining to watch.

Kanter had all of his 10 points in a seven minute stretch. To help the Jazz gain that 21 point lead.

The starters came back in and the energy decreased by like a gazillion and the Wizards promptly made a run. The Jazz fortunately were able to hold on and lead at the half by 15.

The third quarter started I ran up to grab a drink of juice and bam when I came back it was a 10 point ball game. The Jazz never really showed the energy they did in the 2nd quarter but the starters kept the Wizards at bay for the most part. The start of the 4th quarter was so ugly and the Jazz lost the little momentum they had.

The 4th was definitely nothing to write home about but thankfully they were able to come away with the win. The Wizards looked pretty inept in the closing minutes of the game, its very surprising to think they had won five of their previous seven before the Jazz had the confetti pore down.

Jerry Sloan was at the game with a fancy shirt:

jerry ( my screenshot of @jazzbasketball1's photo) 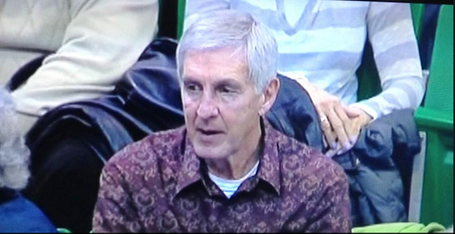 Video courtesy of @da_breezman. If you aren't following @da_breezman (Eric) you should be, seriously he is a great great Jazz fan. Eric is so great about sharing pre/post game videos, shoot around videos etc. As a Utah Jazz employee Eric brings the goods!

The win was impressive because they didn't just rely on hot shooting to pull out the win. The Jazz shot only 25% from three after being pretty hot from three. The Jazz are now 10th in the league in 3 point shooting. Ty Corbin shared with Steve Luhm what he thinks the difference is with the Jazz and 3's this year.

According to Corbin, the Jazz’s success from the 3-point line is predicated on "guys making the right play.

"They aren’t making up their mind they’re going to do [something] before the play develops. They are reading what happens and trusting — if they get doubled — that everybody is going to make the right play. And it becomes contagious."

Despite the poor shooting, the Jazz had 24 assists in the game, which is pretty good. Jamaal Tinsley had six, which is great! Tinsley is becoming one of my all time favorite Jazz players. (like role player level). It is nice to have a player who sets up others on the team, who knows how to create and isn't just looking for his shot.

Tinsley just makes the Jazz look better. Obviously Tinsely cannot be the point guard of he Jazz's future but he can sure help out and keep this team going while we wait for that future point guard. (even from the bench)

I think we look good with Tinsley because if a play breaks down he doesn't just shoot the ball, he is able to do his street ball playing, nutmeg loving, Brooklyn native balling.

How good will the Jazz look when they find that passing point guard to fit with this team?

" What is My Motivation: The Ty Corbin Edition"

The thing I love about Moni, is that she approaches sensitive topics with care. She presents the facts and lets you draw your own conclusion. Moni does not have an agenda in her writing.

A few of the quotes that stood out to me (this was on 1280, as related to Matt Harpring):

PK talked to Ty Corbin, and Ty was talking about how during his career, it bugged him that every time he went to camp, it seemed like every year there was always some new hotshot, who hadn’t proven anything, who was in front of him in the pecking order.

And now, Ty plays veterans over young guys. I don’t think that’s an accident. That’s his story, that’s who he is.

So 1280 supporting how many of us feel. Ty favors the vets that's how it is (for better or for worse).

As you get older, you gotta let things go, ’cause otherwise you will stay in the past and run through mud the rest of your life. So in order to get better, you gotta kind of learn from the past and move on. And it’s one thing to let it drive you and motivate you, but it’s another thing to keep revisiting it and let [it get] you back down

Ty was traded six times in his career and waived four times, the longest he ever played for one team was 2.5 seasons. (great research Moni, seriously go check out her post right now).

Ty has said that he wanted to stay where he was, wanted to be with one franchise. That has to make Ty feel more for the journeyman vets and any vet we have on our team. Ty has called younger players "new hot shots". Being waived for youth four times is hard!

All I really wanted to put in the Downbeat today was this:

So take your guesses :)