The Big Man Conundrum- The Downbeat #951

Your weekly Monday downbeat. Part of a balanced nutritional breakfast.

Share All sharing options for: The Big Man Conundrum- The Downbeat #951

First of all, the fact that the Jazz were able to beat a superior Pacers team and their #1 defense, the night after traveling back home from LA is a big deal. This might have been a bigger win than any other so far in the season. The game did end in a very odd manner, however with the inbound ball hitting the bottom of the backboard before hitting Earl Watson and being gathered by Millsap. This of course led me to a thorough reading of the NBA rule book and after further research, I think it is obvious that the refs blew the call. Here is my proof from the rule book on nba.com:

"Any spectator who verbally abuses players and/or coaches in a manner which, in the opinion of the game officials, interferes with the ability of a coach to communicate with his players during the game and/or huddles, will, at the direction of the crew chief, be given one warning by a building security officer. If the same spectator continues to behave in a like manner, the crew chief shall direct a building security officer to eject the spectator from the arena."

I do not believe that the front row fan who was ejected against Miami was given a verbal warning, and he was obviously berating a ref, when the rule clearly states that you can't verbally abuse a player or coach. So there you have it.

Here's your weekly offensive and efficiency update for the Jazz. Notice that the Pacers are indeed a ridiculously good defensive team. 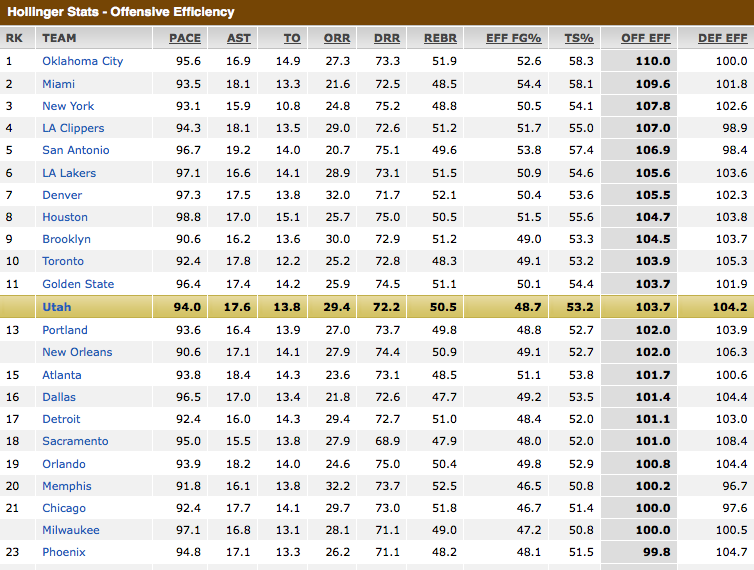 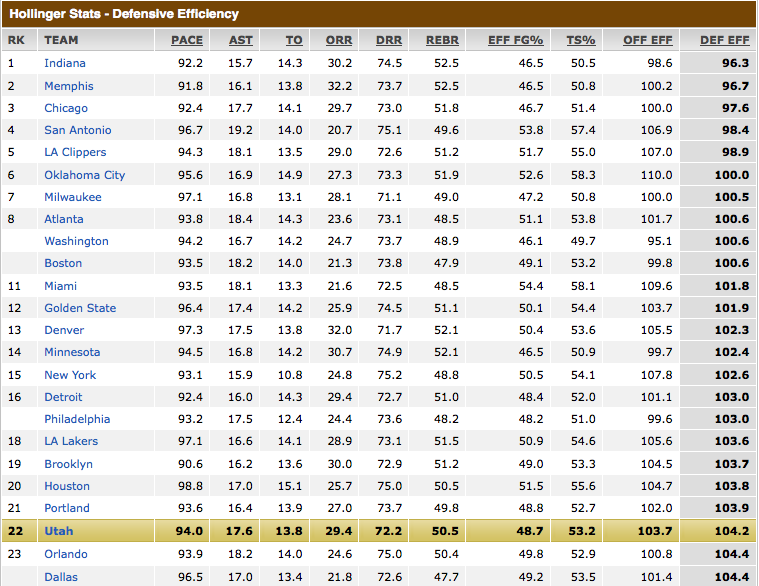 With all of the talk of trading for the point guard of the future and the fact that the Raptors look like a team that could both use a big man and could trade a point guard, this piece by Grantland's Zach Lowe is a must read for Jazz fans.

Lowe discusses the pros and cons of both Kyle Lowry and Jose Calderon as well as anyone you will read on the internet. Here's an excerpt:

"It’s a step too far to suggest there's a bitter divide between the front office and the coaching staff on Lowry. But there is at least a difference of opinion, and how the team handles that is crucial as the Raptors work to assemble a core that might be able to contend in a post-Miami world. Calderon will be a free agent this summer, and though he’ll be 32 by the start of next season, folks around the league expect his competent play will still command something in the $6 million to $9 million range on the open market. Lowry’s contract expires after next season. Giving both market value is a waste of resources."

I'm a huge Kyle Lowry fan and have been since we even had Deron Williams here. It would obviously depend on the cost, but trading for Lowry is probably my favorite, realistic option. However, as the article mentions, Lowry has his flaws and putting him with Hayward, Favors and Kanter, for instance, isn't an automatic slam dunk.

And for what it's worth, if Calderon landed on the open market, I would rather pay him 3 years, $20 million than Mo Williams. I wonder if Calderon would be open to coming to Salt Lake as a free agent? But this is a situation to certainly keep an eye on.

I spent a good portion of the weekend, preparing this table of the effectiveness of big man pairs the last two seasons. This table was compiled with the help of nba.com and looks at how the team performs both offensively and defensively when certain big man pairs share the floor. I hope that you will find it as interesting as I do. 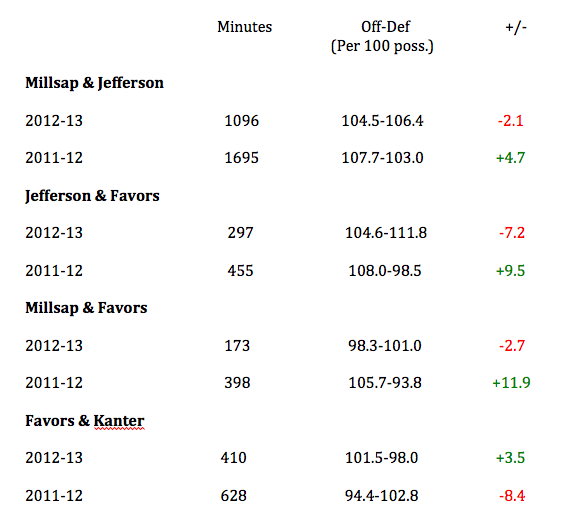 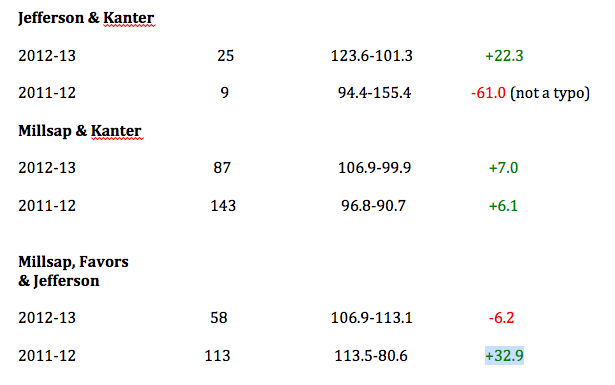 If there is one thing I am most certain of, regarding the Jazz, it is that 1 or more of the 4 current Jazz big men, will not be with the team either after the trade deadline, or to start next season. But if you are the Jazz decision makers, what do you do with data like this table? It's hard to get much information from this table, but I'm going to try:

-Unless Favors is on the floor with them, it is hard to say that Jefferson and Millsap are cutting it. They are certainly getting killed defensively. They give up 106 points per 100 possessions together, while playing the most minutes of any Jazz duo. That's more points than 26 teams give up per 100 possessions.

-Just from this data and nothing else, you would determine that Millsap and Favors make a more productive front court to winning basketball games than Jefferson and Favors, although there are other factors as well, not in this data.

-It is surprising how bad the tandem of Jefferson and Favors has been this season. I have theories as to why that is, but I'll just say that if I were an opposing coach playing the Jazz with Favors and Jefferson on the court, I would just play a 3 point shooting big at the power forward position.

-Millsap and Kanter have been surprisingly effective the last two seasons together.

-Jefferson and Kanter's numbers are hilarious and shouldn't be taken for anything, probably.

-Even though they are playing against benches primarily, the tandem of Favors and Kanter is playing well this season. Their huge improvement from last season to this season is noticeable and might be the most significant thing about this data moving forward.

-I still believe in playing Millsap, Favors and Jefferson together, no matter what Millsap, or Favors, or Jefferson, or coach Corbin say about it. That lineup saved the season last year.

Gordon Hayward had a bad last couple of minutes of regulation on Saturday night, but it's important that it doesn't define him as a player this season or in the future. Interestingly enough, Indiana's Paul George was having similar turnover problems earlier this season in the pick n rolls as documented in this piece by Lowe, and now he's an all-star after a little patience and tweaks to the system. Just remember that when Gordon is handling the ball off pick n rolls, in late game situations in the Western Conference Finals in 3 years from now.