A time to forget, a time to remember.

Share All sharing options for: About Last Night... - The Downbeat #952

The loss last night was embarrassing, surprising, frustrating, but it was also historical. We lost by 45 points, which is the 5th biggest loss of Jazz history and the biggest home loss. On March 14, 1979, the New Orleans Jazz lost at Milwaukee, 102-158 behind Junior Bridgeman's 25 points. Nine Bucks scored in double figures including 6 players who each scored 15 or more points. Yikes.

The worst home loss also happened against the Milwaukee Bucks, on November 18,1980. The Bucks beat the Utah Jazz, 126-93, behind Junior Bridgeman's 19 and Sidney Moncrief's 21 points. I guess you could call Junior Bridgeman the original Jazz killer. Golden Griffith and Adrian Dantley were the only Jazzmen to score in double figures that game.

So if you are doing the math, I'm estimating that about 85% of our slcdunk readership was born in between last night and our previous worst home loss. Like I said, last night was historical. Awesome. 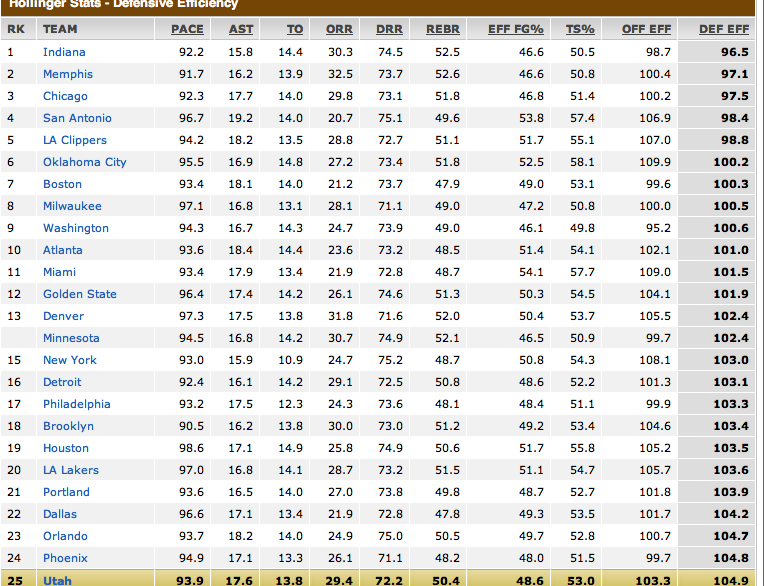 Of course, I am just jesting about the daily efficiency rating, but I thought it was also pretty remarkable that in one game, we added 0.7 points to our defensive efficiency and dropped from 22nd to 25th. It's funny. Sometimes you just have to laugh.

Yesterday, I posted some big man combos and their minutes played and their +/- differentials. Today, I figured it might be fun to see the 5 best 5 man lineups that have played over 40 minutes together:

Yesterday I was discussing the idea of finding our point guard of the future in this upcoming draft with some folks on twitter and made an interesting realization. First of all I believe that the true point guard of the future for the Jazz, whatever that means, will come from the 2013 draft. Secondly, I will write a whole post in March about the point guard prospects in the draft. I promise. But here was the thing I realized:

Look at that list. That's 11 starting quality point guards that I would take on this team right now, who all went low enough that we could draft them with one of our 2013 picks. Point guards fall, because teams love to draft big men and athletic wings. The Jazz will have to do their homework and take some chances, but they could certainly draft a starting point guard this upcoming draft.

Yay or nay on this trade?