Looking forward to tonight's matchup against the Hornets Pelicans Hornets and thoughts on Derrick Favors' offense.

Share All sharing options for: The Downbeat #953 - Self-Induced Amnesia

What is with these long breaks in between games? I mean, the Jazz haven't played since that ugly loss at LA, and before that it was another 4 day break. Crazy scheduling quirk, am I right?

Up next are the rebuilding Hornets of New Orleans. Last night those Hornets took the Lakers down to the wire. Think this is a no-brainer? Think again. The Jazz came out with a win the last time the teams met, in New Orleans, but that was without Eric Gordon or rookie phenom Anthony Davis. Before that? A 2 point loss, again in New Orleans, again without Eric Gordon, and Anthony Davis only played 14:00. The Jazz are going to have their hands full.

Derrick Favors has been really interesting to watch the last few games. Despite the losses, he has began to show some maturity in his offensive game that could, with consistency, launch him into the top echelons of NBA big men. Specifically, he is taking his time, seems to be seeing things unfold in the offense, and his jump shot has looked fantastic. The problem I see is that he is still getting most of his looks off of post-ups; 28%, in fact. According to MySynergySports.com, on these plays he is scoring just 42% of the time and turns the ball over 18% of the time and shoots 43%. Compare that to his pick and roll numbers: These account for 11% of his possessions used, and shoots 33% as the roll man. However, there are very bright spots. As the roll man he gets fouled 21% of the time, turnovers drop to 9%, and his total percentage of scoring is 44%. Further, because his percentage fouled is so high, the differential in PPP (points per possession) is .8 on post-ups and .77 on pnr, despite the lower FG%.

Food for thought: Run Favors in the pick and roll more. Twice as much. Yes there will be a learning curve, but if his jump shot continues to come along and his offensive IQ continues to develop, he will have the ability to pick and pop, which will really open up opportunities for him.

We always see the comparison tossed around that maybe he is more Tyson Chandler than Dwight Howard. My thoughts whenever I hear this are "So what?". There are much worse comparisons to be made than one of the best defensive big men in the league right now. Sure, that's what he's primarily known as, but have you seen his numbers in pick and roll possessions? Let me tell you. For Tyson Chandler, the pick and roll counts for 33% of his possessions used; on these he shoots 71%, is fouled 21% of the time (sound familiar), turns it over just 4% of the time, has a scoring percentage of 74%, and gets 1.4 PPP. That's a pretty damn potent offensive weapon.

My proposal is that rather than take the "go be Big Al" approach, the Jazz work on tailoring the second unit offense to the strengths of Favors and this should be one of them.

As I was looking at the above stats, I googled "Derrick Favors". Do not do this. You will read some asinine rumors about him being traded to the Miami Heat. Why is this asinine? The supposed player the Jazz would receive is Mike Miller. Whoever is coming up with this nonsense needs to read this.

Seriously, it things like this that leads KOC to say the following in an interview on 1280 (as transcribed by Moni):

The moral of the story: Be cautious when googling a Jazz player for the next three weeks. 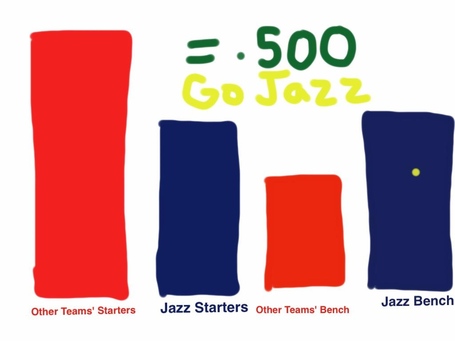