The Millsap Is Now a Tweep Edition- The Downbeat #954

Share All sharing options for: The Millsap Is Now a Tweep Edition- The Downbeat #954

Jazz won! Yay we were able to put that awful loss behind us and beat the New Orleans Hornets (15-31). I think the Jazz should play all their games on Wednesdays:

The usual Jazz game happened. Slow start, awesome 2nd quarter from the bench, third meh from everyone not named Paul Millsap and back and forth fourth quarter.

I am very happy we won. I think its important to win after that HORRENDOUS loss on Monday. I am happy with the win but I don't think it was that impressive of a win.

We saw spurts of good things so I guess that's an improvement but I don't think any of us can say it was a great impressive statement comeback game from start to finish.

Lets look a little at Favors game first. I feel he is really the one that set the tone in the 2nd quarter. Favors gave the Jazz life.

Favors played 22:43. He played around 12 in the first half when he was hot. Favors scored 10 of his 15 points in the first half. When the starters were in the Hornets were strolling into the lane at will, once Favors entered the game it all changed.

Favors shot 6-9 from the floor and made 3-5 FTs. Favors only had 1 assist. I would love if we had someone to mentor Favors on how to make the pass in the paint. Seems like we used to have a big man who was pretty dang good at passing.

Poor Kanter only played 5 minutes all in the first half even though he played well.

Millsap started a little slow but became more and more agressive as the game went on. Phil Johnson pointed out on the post game, which I all think we can agree with, Millsap is a much better player when he is attacking the hoop and not settling for jumpers. Johnson pointed out that Millsap made a few free-throws got a few steals and that's when he really started to take off.

Millsap went to the line 16 freaking times! He really took Davis to school. When as Millsap ever gone to the line that much?!

Al was Al. I liked how clutch he was in the 4th, he hit a lot of big shots, but overall I don't think he had one of his better games. 10-18 from the floor, 2-4 from the line and had five rebounds. Al's post game was great he seemed very happy which is always nice to see.

Marvin, I have a soft spot for Marvin, he didn't have a great shooting night 2-10 but he did grab some nice rebounds and he did play pretty good defense.

Burks was impressive in his 16 minutes. Burks got to the line, he was relentless in driving to the basket. Burks even got to play a little point guard :)

Carroll was Carroll. I loved his agression. He brought real life to the team. Carroll only took 3 shots, which I like a lot. i like when he is more worried about playing defense and doing little things instead of taking jumpers.

A big fat meh. Tinsley only played 17 minutes. Had 2 points and 2 assists. Seems like since he got all that attention after his big game awhile back he hasn't shown much.

Earl again was meh and had a scare with his knee. Earl had five assists and made some pretty passes. 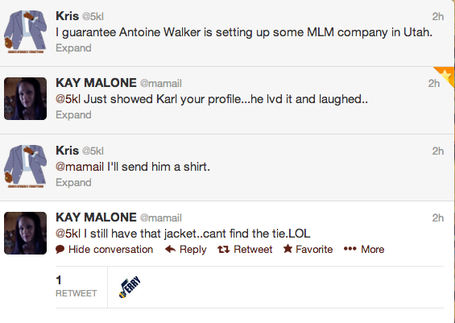 Karl and Kay were watching the game together. I love that Karl still watches the Jazz. I imagine it was on his local TV last night but still.

Who do you think on our current team will be tweeting about the Jazz in 15-20 years, who's family?

The Grizzlies, Raptors and Pistons agreed to a six-player trade Wednesday that sent star swingman Rudy Gay to Toronto.

The Grizzlies, in the midst of a money-motivated makeover, acquired forward Ed Davis and veteran guard Jose Calderon in the deal that also sent backup center Hamed Haddadi to the Raptors.

I know some Jazz fans were talking about Calderon or Lowry. Now that those two are off the table. What kind of moves do you see the Jazz making at the deadline. We kind of really need a point guard. 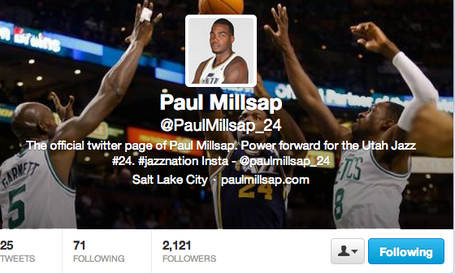 Peter thinks its a PR move with his upcoming free agency, I can't say I disagree.