Share All sharing options for: NBA All-Star Weekend: Taking a look at the BBVA Rising Stars Challenge selections, and seeing what went wrong with the Jazz four lotto picks

The players for the BBVA Rising Stars Challenge were announced and it's an interesting pool of players. Not only are there four Cavs, but there are also zero Jazz players (3 were eligible, but only 2 were lottery picks). They are: Kyrie Irving (Cleveland Cavaliers), Anthony Davis (New Orleans Hornets), Michael Kidd-Gilchrist (Charlotte Bobcats), Bradley Beal (Washington Wizards), Tristan Thompson (CLE), Dion Waiters (CLE), Damian Lillard (Portland Trail Blazers), Harrison Barnes (Golden State Warriors), Brandon Knight (Detroit Pistons), Kemba Walker (CHA), Andre Drummond (DET), Klay Thompson (GSW), Kawhi Leonard (San Anotnio Spurs), Nikola Vucevic (Orlando Magic), Tyler Zeller (CLE), Kenneth Faried (Denver Nuggets), Chander Parsons (Houston Rockets), and Alexey Shved (Minnesota Timberwolves). The majority of those young players happen to play on lottery teams, which makes sense, because 12 of those 18 picks WERE lottery picks. However, some of them are playing for playoff teams or teams in the playoff hunt. Clearly, it's possible to play young players and not be automatically 'tanking'. The evidence is here, and in every other season in NBA history.

Last week I broke down the 24 All-Star selections (fan's vote and coach's picks) for the 2012-2013 All-Star Game. The commonalities between those 24 players was an average draft spot of Round 1, Pick #8.6 -- so a lotto pick. And the other common idea was that they all got playing time early in their careers. It's almost as if gaining the confidence needed to succeed in the NBA is somehow tied to seeing good things happen with you on the court -- and in order to develop a bank of 'good times' to help you work through the bad times you actually need to be on the court.

Let's see the MPG values for the Rising Stars players, the All-Stars for this year, and our players: 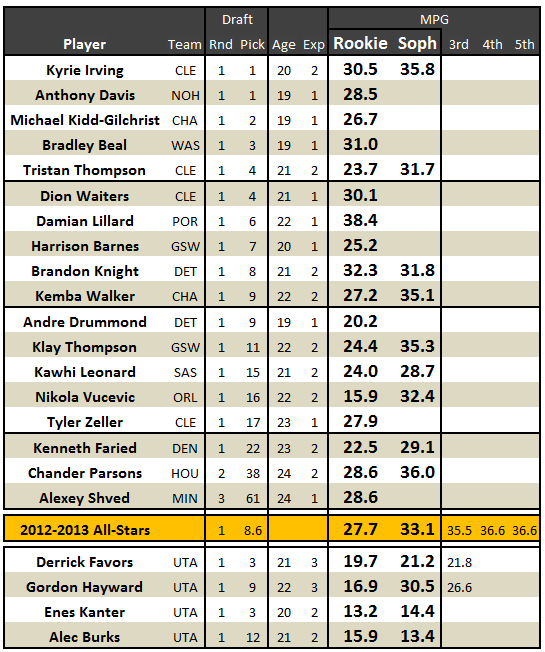 I contend that the Jazz scouting department knows their stuff. I also contend that we draft the right guys. We have four lotto picks in their prime development years on the team right now, two are in their third years, and two in their second years. All four of them appear to be behind the curve. Frankly, guys like Chandler Parsons (second round pick) and Nikola Vucevic (mid first rounder) look to end up better than Gordon Hayward and Enes Kanter -- who were both lotto picks. Why? Not because we suck at scouting. Not because we suck at drafting. They are behind the curve because we suck at developing them. And a huge part of that is confidence, which comes from success on the court.

The Jazz suck at that. You can disagree with me, but that's embracing being wrong about it.

The Jazz are doing a bad job. Even against the other teams out there who are somehow getting consistent positive contributions from guys in their first and second years in the league. Sure -- our guys have nice per 36 minute values -- but some of their peers (or guys in lower grades) are playing more than them and getting better faster. So now out of the 25% chance of getting 1 star out of our 4 lotto picks we're now looking at the prospect that NONE of them will be a star. That looks bad for our team, because this is a league of stars. And now you see why the Toronto Raptors go out of their way to sign one; not having one is to embrace mediocrity.

Our guys are behind the curve, and not recognized for their talents -- because they don't get the minutes needed to display them. That's why Drummond's blocks are called blocks, while Favors' blocks are sometimes called goaltends. Not developing the guys with potential hurts us in game. It's not just about recognition from their peers, the media, blogs, or coaches. It's all about winning. Every year these guys get duller if they aren't used; and every year their worth goes down too. We should have instead traded our lotto picks back in their pick stage for proven vets instead -- that's probably what the franchise would have been better able to handle. Because right now I'm seeing more and more evidence of our guys being behind the curve. "More than one way to skin a cat" sure. But there's a clearly demonstrated path towards being a star in this league; and none of our younger guys are on that path. (Getting playing time early doesn't always work either -- but I'm saying the commonality between BOTH these rising stars and all-stars is that they did; and our guys aren't)