NBA History: Karl Malone is more efficient than your favorite player: an analysis of PPS

There's a REASON why he has a statue, by the way. They don't just hand those out for cashing your paycheck.

Share All sharing options for: NBA History: Karl Malone is more efficient than your favorite player: an analysis of PPS

Not many people keep track of Points per Shot (PPS), which is simply Total points divided by Total FGA. It favors guys who get to the line -- but if you are trying to get more points than the other team, isn't the free throw the most desirable shot the get? Anyway, the Utah Jazz know something about PPS. Or at least, any fan of the Jazz knows a little something about it because Karl Malone was such a beast.

As a frame of reference, the actual, cumulative PPS "average" is 1.21 for the last 30 years of NBA basketball. That's for every player, for every team, for every season for the last 30 years. I know, I counted it myself -- the NBA lockout gave me some extra time on my hands. (BTW, It used to be higher, 1.22) Karl Malone has a career PPS value of 1.41. Point of reference, Al Jefferson this season is clocking in at 1.12 PPS. Karl has spoiled Jazz fans for being so efficient -- he is pretty much without peer for his era of basketball. Take a look at him from his rookie year to the ripe old age of 40 . . . 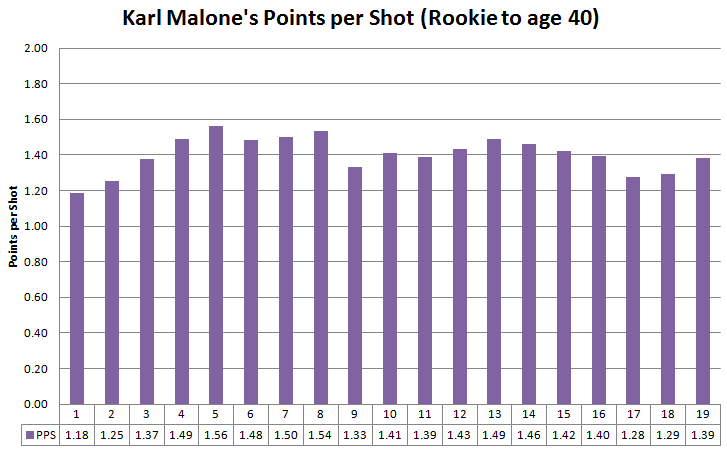 Yep. Kinda astounding. Yet people still think he's not one of the best All-Time. So silly. 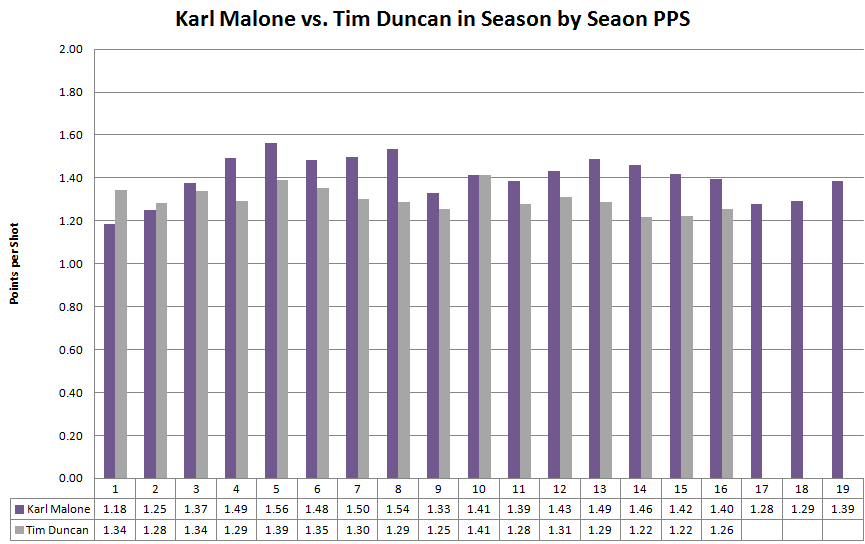 Tim beats Karl twice in PPS in a given season over 16 years. Karl went under 1.30 PPS twice after playing a decade in the league. Duncan has done that five times and counting.