Can the Jazz realistically make the playoffs? WIll it take a trade? And why we should hope for Overtime tonight.

Share All sharing options for: For the Jazz to Rise, Who Will Fall? - The Downbeat #933

The Jazz sit at 17-18 currently after two solid wins against Minnesota and Phoenix, followed by a fairly predictable loss at Denver. Let's take a minute to see where the Jazz currently stand in the offensive and defensive efficiency standings: 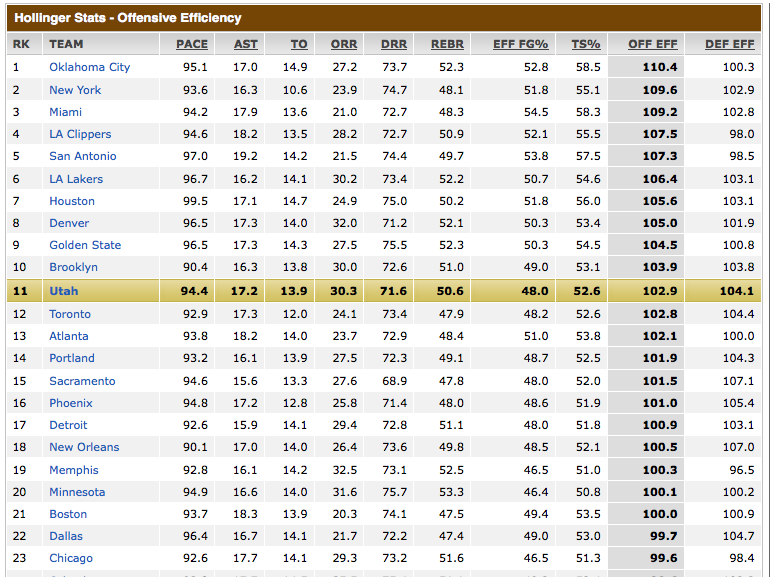 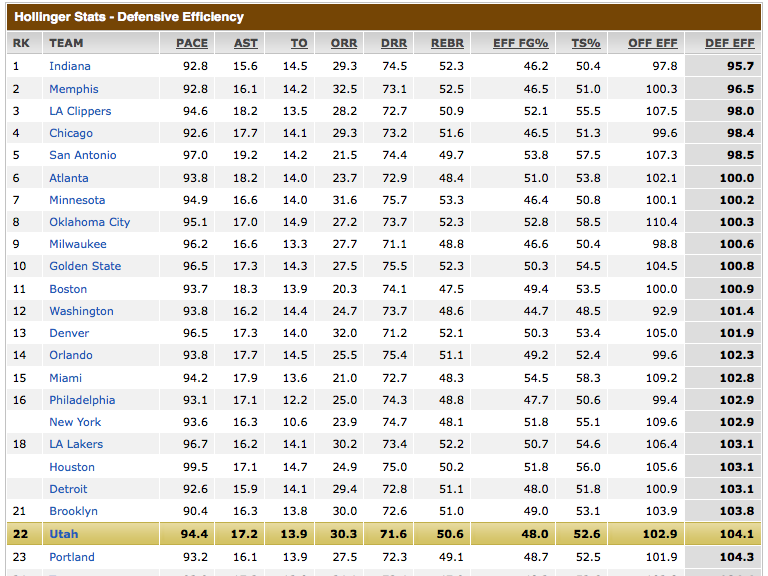 For those of you keeping track at home, over the last week the Jazz got half a point worse offensively and fell one spot, but improved half a point defensively and jumped 3 spots. Eventually, if the Jazz want to "get better" they are either going to have to make a moderate jump both offensively and defensively, or else make a large improvement in one area while not getting much worse in the other. As Sherlock Holmes would say, "It's really pretty basic stuff, Watson."

I'm starting to wonder if it will even matter how much better we get in order to make the playoffs. Have the Jazz dug themselves a hole that is simply too large to climb out of to make the postseason? Here's a look at the standings in the Western Conference as of now: 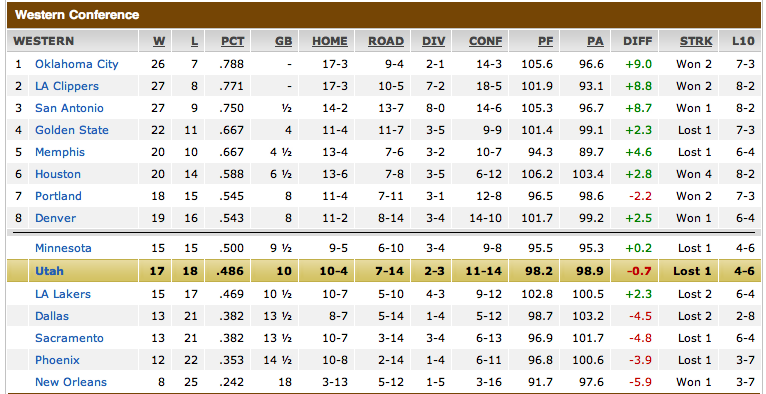 Even with the Jazz's upcoming improved home schedule, they are still in a precarious position. Are there two teams ahead of the Jazz that they can pass right now? Kevin Love just broke his hand again, so you have to say the Timberwolves. And I think the Jazz will end up with a better record than Portland when all is said and done, but I don't think they pass up anyone else. Denver has played better than we have and have even more home games upcoming. Houston has been playing very good basketball and their best player is better than anyone we have. The top 5 teams are unquestionably better than we are, barring some huge trade.

We basically have to hope that the Lakers never get their act together in order to make the playoffs. This is a really interesting season.

Then there is our opponent tonight, the Dallas Mavericks, who have really underachived, even considering the absence of a healthy Dirk Nowitzki. The Mavericks have lost 8 of their last 10 and after losing to the New Orleans Hornets at home in overtime on Saturday night, now find themselves 0-7 in overtimes this season. That is a far cry from a team that thrived on close game situations for many seasons. It is obvious that they are desperately missing Jason Kidd and Jason Terry...and Ian Mahinmi.

The interesting thing is that Mark Cuban is not the type of owner to settle for mediocrity for very long. I think he, and Dallas Maverick fans, would be more fed up with the current middling nature of their team, if they hadn't just won the championship two years ago, which sometimes buys your team a couple years of poor direction. But if the Mavericks lose a couple more upcoming games, you have to wonder if they will just cash it in and try to acquire picks. It's obvious that the Jazz have to do one thing in order to beat the Mavericks in Salt Lake City tonight: make sure the game goes to overtime.

A couple downbeats ago, I asked which TV show the Jazz team would be. There really isn't a good reason why you would describe your favorite sports team with a TV show or a song or a piece of artwork, other than it being a fun mental exercise. It's also a very Grantlandian thing to do. But the other day I was watching the Sacramento Kings play (don't ask why) and I thought, "the Kings are the Me First and the Gimme Gimmes of the NBA." Then I started thinking of other band names you could use to describe NBA teams. I was going to write an entire post on the subject, but I thought it would be more fun to solicit your opinions. Any ideas? Atlanta could be Minus the Bear (Bear = Joe Johnson's contract and possessions.) Let's do it. Let's make a post as an slcdunk community. Hit me up with your ideas. More importantly, which NBA team is the Violent Femmes?

There should be no doubt in your minds as a Jazz fan that the front office is being very proactive in seeking out deals in order to improve the team. I don't have many inside sources, but the few I do have all suggest the same idea. We all know the Jazz have a lot of pieces to be big players on the trade market, and I also think it is safe to assume that the Jazz would be willing to package one of their big men starters and pieces for an upgrade at the point guard or wing position. With all of that said, I remain very skeptical that a trade like that would happen. We already missed our opportunity to acquire the real wing player that would upgrade our team in James Harden. But the guys being talked about as available that would fit that mold are guys like Monta Ellis and Rudy Gay. Here is a list of the top 30 scorers in the NBA: 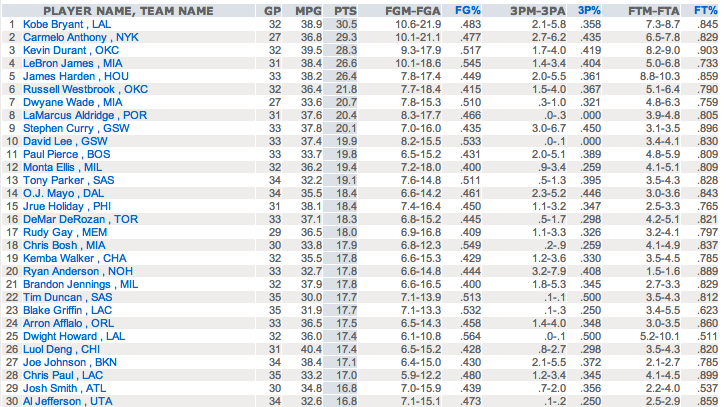 I think the Jazz are left toying with the idea of trading for either Ellis or Gay. The problem is that Monta Ellis sucks and Rudy Gay has an albatross contract while possibly not helping his team get any better. I found some of these tweets from Haralabos Voulgaris to be interesting, whether they are true or not, I can't comment on.

I am just hoping and praying that the Jazz don't acquire a high volume, inefficient wing scorer like Rudy Gay or Monta Ellis this year. So for the crazy trade idea of the downbeat, let's explore another "rumored" deal (I had to do some fudging of the trade, since Jeff Green can't be traded until January 15th):