There are 5 installments to today's Downbeat. These will be dropping throughout the morning. One for every member of the F5. There will be 25 points of the Downbeat today. The U.S. Government may have shut down, but not MyLo. First up ... Trey Burke.

ESPN.com ranked Trey Burke as the #161 best player in the NBA. Pretty high honors for a rookie point guard who has not logged a single NBA minute. 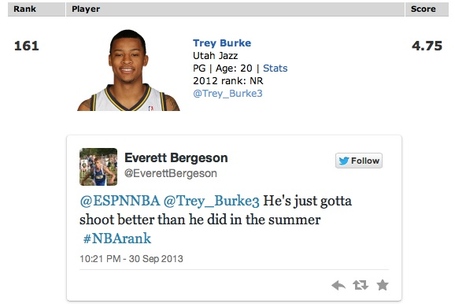 Trey Burke told the media on Monday that he learned a lot of things from Stockton. One of which was how to handle the screen. In this conversation with David Locke, Trey Burke glowed about John Stockton.

"It was an honor, first and foremost, to have the opportunity to meet him. ... He's such a basketball genius. He wants to stop you ... he wants to teach you. ... He taught me a lot about patience, ball screen, shot selection, different reads out of the pick and roll. He taught me a lot. Really. In the two, three days I was with him, I tried to soak it in and apply it. There was so much coming at me, I tried to take the important points he was teaching me. and take it in. The main thing he tried to tell me was that we were both small guards. When you're small you have to be smarter than the other guys. You gotta play at your own pace, you have to understand angles and spots on the court.

I'm impressed by Trey Burke's reverence towards John Stockton. Not only that, but his attention to everything that John Stockton was teaching him. He was a very attentive listener. He was a very willing learner. If he is willing to put that much skin into the game and pay the price with work while furthering his learning by listening to greats like Stockton, he is going to be an amazing addition to the Utah Jazz.

Trey was floated a hypothetical situation from David Locke. In the 3rd quarter on October 30th against OKC he calls for the screen. Russell Westbrook decides to go below the pick and roll. What is Trey Burke's next move? This is his response. Pay attention to what Trey Burke has already learned from John Stockton.

Burke: I'm going to call for the rescreen. Then come of the screen and it's going to be a good pocket pass or 5 foot jumpshot.

Locke: So you're not just banging the minute ...

Burke: Maybe before Spokane I would have done that. John, he told me, he told me he didn't like to start out the game shooting a lot of threes. If he missed a couple his percentage would drop.

Trey Burke has already shown that he has learned from Stockton patience in this whole process.

In addition to Stockton helping Burke become a better playmaker, Stockton shared with Burke the secret to becoming a better shooter. In true John Stockton fashion it had nothing to do with shooting.

John Stockton sharing his secret. The secret to shooting better is distributing better. Classic John. John Stockton does have a point. If the point guard is seen as a multiple threat, meaning that any person on the floor is about to score at a moment's notice, rather than a singular threat then he is harder to guard and given more space to work with. Kudos, John. Kudos.

Count John Lucas III as a member of the Trey Burke bandwagon. He has been impressed by Trey Burke already just through their interactions during open gym and P3.

John Lucas III on Trey Burke: "Trey, he's going to develop into a wonderful player. He’s going to be star in this league. He has the tools."