There are 5 installments to today's Downbeat. These will be dropping throughout the morning. One for every member of the F5. There will be 25 points of the Downbeat today. The U.S. Government may have shut down, but not MyLo. Next up, Derrick Favors.

This seemed to be the most interesting quote from Favors all day.

Favors:  I mean, I tell everybody, a go to move to me is just scoring the ball, really.  I know a lot of people might say, the sky hook, or Big Al, the one hand hook shot, whatever.  I think my game, until I work on it a little bit more, and just figure out something, it's just scoring the basketball right now.

Locke:  It seemed like his point, though, was he wanted you to have something to build off of?

Favors:  Yeah just something to just have a foundation with and to have something to build off of.  So that when they take that away that I have a countermove to that, tho.

Upon the first reading it is very easy to think that Favors just doesn't understand the gravity of working with Malone.  He says, "A go to move is just scoring the basketball," which is not what Malone had in mind.  But then, remember, that Favors is the guy who requested, begged even, to work with Karl Malone.  He wasn't just going to throw this opportunity away.

When going through Hayward's quotes, however, Hayward seemed like he was keeping a lot of things close to the vest as though he had a really good poker hand.  For the time being, the same can be assumed for Derrick Favors.  What good would working with Karl Malone be, learning his secrets, and getting better if Favors just blabbermouthed to the entire league how to guard him now?  What he's better at?  Favors' development is a huge unknown to opposing teams' scouts and coaching staffs.  Good on Favors to be as vague as possible and keep opposing defenses guessing for a little time longer.

Derrick Favors has a message to all those who believe that he's too shy to lead.

Boom. RT @JazzGameNight: Favors-I'm not quiet y'all think I am.

Please do follow @JazzGameNight.  Great twitter follow.  Won't be disappointed.  While Derrick Favors is quiet and subdued to the media, he is a different animal on the court.  One can only assume that that same behavior continues to the locker room and during practices.  He's vocal about what he's passionate about.  He lives in those moments.  Derrick Favors vocal range is like that of a great white shark.  When there isn't blood in the water he's fine.  But when the moment gets intense and the game on the line, he can be heard.  He will be heard. 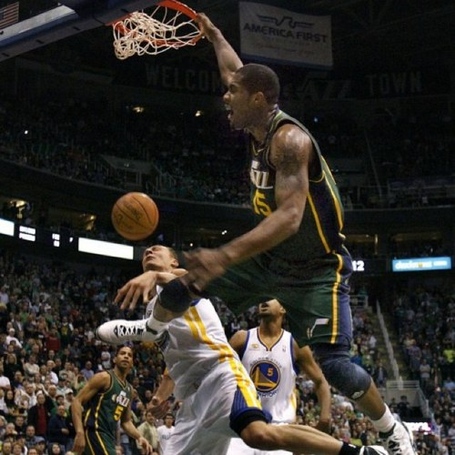 When asked if he might consider changing it since he his brutally posterizing his own teammate, Favors continued the sentiment of Utah's soon to be star Bigs' feelings about dunking on their comrades.

In @dfavors14’s avatar he is dunking over new teammate Andris Biedrins. "I am keeping it. It was the best moment of my life."

Derrick Favors is a bad man.

Dennis Lindsey talked about yesterday being the day in a new direction.  It sure felt like it.  Much like a new season of Saturday Night Live with new, bright eyed cast members, the Utah Jazz are filled with young talented players.  Some of them will become regulars on a weekly basis.  Maybe one or two will even become stars and stand out in the national conversation.

But like all new cast members on SNL, there will be some rocky sketches, a few character choices that don't pan out, and some awkward and terrible moments in front of the camera.  If they work hard and endure the initial failures they can become something great together and be one of the most memorable casts that Utah has ever had the joy to witness.  Most of them have been waiting a long time for the prior cast to move on.

Is Jazz's Derrick Favors ready for an expanded role this season? "... I've been waiting for my opportunity since I got drafted."

Who will become the Jon Haders, Will Ferrells, Tina Feys, and Jimmy Fallons of this group?  And who will become the rogue cast member that shows up on the show's intro, but can't seem to get the writers to put them in a sketch?  This season has a lot of questions, but soon they'll be answered.

Brad Rock of the Deseret News was able to get an interview with Karl Malone.  Go read it for the full story.  These quotes I found interesting.  The full story is amazing.  Thank you, Brad, for getting a great scoop.

Karl Malone glowed about Derrick Favors and Enes Kanter."Without a doubt," said Malone, who worked out with each during the off-season. "Let's not smooth over the fact that there are great expectations here. I understand people want to bring them along slowly and they're not superstars, but let's not hide behind the fact that these guys are very talented.

"I'll tell you straight up these guys have the talent to be as good or as great as they want to be."

"It's game time now. These guys have the talent. You might look up and see them getting double-doubles and it surprises everyone, but it won't surprise me," Malone said.

Malone has never been one to mince words.  But let us not forget that last year he said the best lineup for the Utah Jazz would be Alec Burks at the one, Gordon at the two, Marvin and the three, Favors at the four, and Al Jefferson at the five.  It would end up being the Jazz's 3rd best lineup in terms of point differential.  He said that Alec Burks was Utah's best option at the point guard position.  He was right.  He said it was time for Millsap to move to the bench or move on from him.  It came to pass.  He said that Favors was a defensive monster and needed more playing time.  Done and done.  He was on the Kanter bandwagon before most.  Many people mocked him in his appearance on NBAtv at the time, but by the end of the season he looked like he had a time machine.

So when Karl Malone says that he believes Derrick Favors and Enes Kanter will be stars in this league, believe him.  After all, he was right about last year.