The Downbeat #1169: The Boise Edition

The Utah Jazz play in Boise tonight. Looking at Jeff Hornacek the coach. A Yucca rant. Randy Rigby on the young players and another national Jazz preview

Share All sharing options for: The Downbeat #1169: The Boise Edition

Tonight the Utah Jazz take on the Portland Trailblazers in the wonderful city of Boise. My family and I are attending the game. I am so excited to have the Jazz come to this city that I have to live in now. The arena holds just a little less than six thousand people, so it should be an intimate affair. The game is sold out. We were lucky to get tickets on such short notice.

A few days ago I went online to buy tickets and I couldn't get any (four all together even two for that matter) so yesterday after school and homework (for the kids) I thought lets go to the arena box office and see what we can do. Luckily we only live about 10/15 mins from the arena. Unluckily for us I didn't check to see what time the box office closes ( it closes at 4:30). Silly me thinking they would be open until at least 5:00 p.m. We got to the box office around 4:45 and they were closed. I didn't know it though, I thought maybe there was an indoors box office open on non-game days that we were missing somehow, since all the ticket windows we saw were outside and closed. The arena is attached to a hotel (apparently the nicest hotel in Boise) so we wander around front to the front of the hotel. There was a group of employees. I approached them and asked them where the ticket office was. They told me to go exactly where we had just been. I told them we are interested in buying tickets to the Jazz game for Friday night. The manager said "Missy, you should have bought your tickets earlier, they are sold out, standing room only! "

Feeling a little down I go home and check the website one last time for tickets. I mean if we have to do standing room I guess we'll do standing room. Somehow, I am guessing they opened up a few seats at the last minute, I was able to get four seats all together right behind the basket. Only $20 each! I buy the tickets very happily. Crazy that I am willing to buy tickets to a preseason game. A few minutes later I check just out of curiosity if there are any other seats available and nope every section came up with no seats available. I don't know how we did it and why I was so lucky to get the seats the moment I did but somehow we did!

I know the game isn't on TV so I'll tweet (@dianaallen) as much as I can without missing the action and ignoring my family.

Here are some pics we saw near and at the arena. 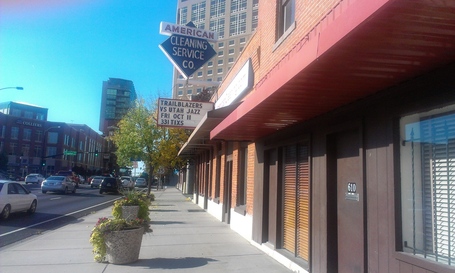 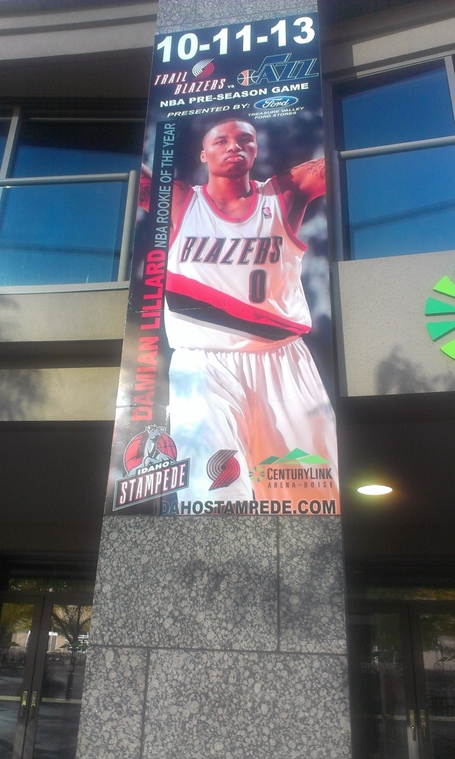 I thought it would be fun to dedicate a section of the downbeat to catching up with former Jazz players and/or coaches. We can do this when we don't have as much Jazz news to share. This week I thought we could catch up with Jeff Hornacek.

I am a big Hornacek fan. I loved him as a player and I loved him as a coach. I have enjoyed watching from a far how he is doing in Phoenix. A friend of mine was hired as the digital reporter for the suns.com this summer. My friend, Matt Petersen used to work at the Daily Herald ( I got to work with him there for a year), then he replaced The Shums at the Deseret News and finally he got his dream job of working for the Suns. Through Matt's twitter and chatting a bit on Facebook I have been able to learn about Jeff Hornacek, the head coach. Make sure to follow Matt on twitter @TheMattPetersen

Here are a few tweets from Matt during one of the Suns preseason games this week. 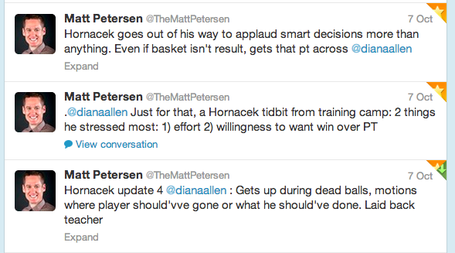 Matt sent me an article about Hornacek comparing Bledsoe's defense to Stockton's defense. And his post game comments after their preseason game. I was going to do a write up about it for this downbeat. but @jazzbasketball1 did a wonderful post covering everything I wanted to cover and more.

it is a really thorough post. Its amazing how much we are able to learn about Hornacek the coach in such a short time period.

Hornacek on the pick and roll

"When you look at the game today, with the rule changes — that’s why everyone is going to some sort of pick-and-roll. The rules are, you can’t touch that guy with your hands. It’s not like the old days, where you could hand check."

"We gotta get rid of that long 2. I’m not opposed to the middle jumper, in that 15- or 16-foot range. I think all but two teams that were in the playoffs, their effective field goal percentages were above 51 percent. If you can shoot 15-footers and shoot 52 percent, OK, you’re beating the average. You can’t totally discount those shots."

I always like to keep the ball on the side. When I played point guard, and I got stuck on the side, it was always more difficult for me than when I could get around and into the middle of the court — where I could see everything. There are so many more things that become available when you get into the middle. That’s what I like to do, and we hired Mike, who has run Boston’s defense the last three years. We’ve looked at a lot of things they do, I’ve watched them, and I see a lot of things I like to do.

There is so much more to this post , please go read it. In fact please check out JBB's blog every day as one of your daily Jazz reads.

Lastly I liked this about who Hornack will base his coaching style from:

His coaching style, he said, would be heavily influenced by his days playing for Cotton Fitzsimmons in Phoenix and Jerry Sloan in Utah.

"Hopefully, I can take Jerry’s toughness, Cotton’s enthusiasm and confidence-building and blend them together," Hornacek said, "and become a great coach like some of the great coaches that have been here in the past.’"

I do recognize that Jeff is only 19 weeks into his coaching career but its looking good so far for the Suns.
Thank you JBB and Matt Petersen for helping us stay caught up with a Jazz favorite Jeff Hornacek.

Yesterday in practice John Lucas III was asked about his performance in the preseason game against the Warriors. This was his response (via moni at jazzfanatical.wordpress.com)

Can we expect that kind of firepower from you every night?Yeah, absolutely. You know, I come to play. I come in with a lot of energy. That’s my thing. When I step on that court, I make sure I give it everything I have. You know, every possession. I’m taking no possessions off, and that’s the way I been playing my whole life, and that’s how Imma continue to play.

This lead to a nice rant from Yucca on Twitter:

My biggest concern is that Coach Corbin feels the same as Lucas and decides to start Lucas and bring Trey along slowly. I really hope I am wrong.

Please check out my_lo's post about the same topic but a really really funny take on it.

Randy Rigby had his weekly interview with the Zone. Of course Moni has you covered. This stood out to me from his interview and its something I noticed with Coach Corbin's post game comments also.

On playing the young guysWe've set up this lineup now so that these young players can get playing time. [But] they have to also discipline themselves and do those things that will allow them and not do the stupid fouls, a–so that it’ll allow them to have the time, then, to be on the court and actually have time to play.

I don't understand the need to always include a negative or a consequence when discussing the young players. They are your core players now, they should/hopefully will get the bulk of the minutes. We've heard all summer how it is their team now. Why is it that the first week of games and training camp we've heard from Coach Corbin and now Randy Rigby always something negative related to the young players? Praise praise Richard Jefferson and John Lucas III but no the young kids either need to learn, or not foul or not do this or that.

As a parent and a former school psychologist I do not agree with this method. I cannot imagine it makes the players or agents feel good about their situation in Utah. Of course the young players know that they have a lot to learn, of course they know they will make mistakes but why focus on that? I know with the students I worked with and with my own children it never does any good whatsoever to focus on the negatives or their weaknesses. You can address such issues without pounding it into them.

My son has dyslexia, school is a struggle for him since nearly all of school has to do with reading. We work on his reading everyday. He is behind his grade level but I would never let him know that. What good would it do? We focus on his improvement in reading and focus on what he does well in school. I couldn't imagine telling him everyday. Hey did you know you struggle at reading?! Did you know that you don't say your "r's" correctly. My son obviously knows he has things to work on and he knows reading doesn't come as easily to him, of course he recognizes it but I would never focus on that with him. I don't see any difference in that what we've heard from RR and Ty the last few weeks regarding our young kids and how they are doing.

Dan Feldman of NBC's probasketballtalk (also a freelance NBA writer for AP and owner of Piston Powered of the True Hoops network) released his Jazz preview today. Its worth the read.

2) Is Ty Corbin a good coach

3) How much can the Jazz gain by flipping their veterans (Richard Jefferson, Biedrins, Rush and Marvin Williams) ?