We once again take a look behind the Rosed Moda-ed Curtain.

Share All sharing options for: Behind Enemy Lines: Blazer's Edge

Dave reminisces about the Sonics.

Do Portland Fans Still Mourn the Seattle Supersonics? - Blazer's Edge
On the one hand, this conversation made me nostalgic for the four extra rivalry games that once dotted the Blazers schedule.  On the other hand, standing in the midst of so many Seattle fans made me itch.  I mean, do we really want to feel sympathy for these guys?  You know that's going to come back to haunt you.  The whole thing left me wondering how prevalent the Seattle sympathy is in Portland nowadays.  We are entering the 6th season without basketball in the Emerald City.  The Oklahoma City Thunder are now spoken of without a hint of disappointment or sarcasm...nary an eye roll to be seen.  People in Seattle still care about this.  How do Portlanders feel?

Ben Golliver tells how Allen Crabbe has one upped even our own example of frugality, Gordon Hayward, in his own car-less behavior.

Acker: Blazers G Allen Crabbe Walked Home From Training Camp, Shares Car With Roommate - Blazer's Edge
Every year we hear about rookies trying to stay disciplined with their spending, but Crabbe was/is exercising real discipline, even if he's simply waiting on a first paycheck that traditionally doesn't come until mid-November. Crabbe stands to earn $825,000 this season and he, like anyone else in his age bracket, could rent a Toyota Corolla for an entire month from Hertz.com for $865 a month. That's without any discount codes, hook-ups, etc. Bottom line: If you see a 6-foot-6 guy wearing a pink backpack strolling through Tualatin, please offer to give him a ride. Maybe the Blazers can set up a "Rip City United" season ticket holder car pool service: If you purchase a pair of 200-level tickets you get to drive Crabbe to practice on Tuesdays and Thursdays, but if you splurge on the 100-level seats you get Mondays, Wednesdays and Fridays.

CJ McCollum is undergoing a non-operative procedure on his foot.

NBA Players, Weed, and You

Even among those who do smoke, I don't foresee the practice becoming public.  As long as it's behind closed doors, though, what difference does legality make?  Unless you're going with Stoudamire-sized bricks of the stuff, it's doubtful the cops are going to come knocking just to write you a ticket for smoking.   In public, though, this is still an image issue.   What would happen if somebody snapped pictures of an NBA player with a regular old tobacco cigarette dangling out of his mouth?  People would be on and on about lung cancer and reduced performance and role modeling.  I can't imagine the reaction being less for pot.  Smart players won't be eager to put themselves in that kind of situation.

Once again Ben Golliver is the ONLY person to follow for tonight's Portland Trailbazers vs Utah Jazz game.  HEY, other blogger-dudes at Blazer's Edge.  WHAT'S YOUR TWITTER HANDLE???  YOU GET FREE FOLLOWERS.

IDAHO: Not afraid of gorillas but very afraid of HD video cameras. 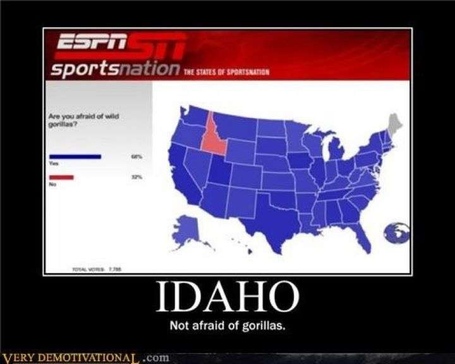 Do they have TV cameras in Idaho?

Nope. We, Idahoans, invented the television yet we cannot supply an arena in our own state with television cameras.

Do people live in Idaho?

I recall a couple D league games being broadcast from Boise last year - so I think they own a TV camera.

Hence we may have a stream tonight

yeah a professional sporting event is a statewide event in idaho

they will have both of their cameras there.

aunt hazel told me that one camera is still being used 24/7 for the live potato harvest broadcast.

and the other one’s outa diesel.

"I have a call to literature of a low order -- i.e. humorous. It is nothing to be proud of but it is my strongest suit." -- Mark Twain

He better be there!

And I expect him to provide the Media Row Report as well. :)

No feed? No television? No problem. We'll talk about pokemon.

Everyone's excited for the Blazers.

do ur homework and chores first and then you can play

Homework and chores would be a welcome replacement for real life.

Because now the consequences are higher than low grades and angry parents. DAMN YOU REAL LIFE!

Sell 'em to the circus!

Pokemon died after the third gen

It was always weird.

Now there’s just more of it.

Oops, no Ad Hominem. My bad.

(Dragonite is the best)

But not as awesome as Nidoking.

What threelittlebears said. Pokemon died after the 3rd generation.

You're totally missing out on Garchomp and Reuniclus.

I've played 4 and 5, just don't like them as much. Well, 4 was alright with all the secret passageways and better graphics due to it being on the DS

Nothing will ever compare

To the first generation. I remember going to see the first movie in theater, still have the card I got from it. The only good thing done in the 4th gen was giving some first gen a third evolution which was cool. 5th gen was garbage.

Trubbish and Garbador. But there were some awesome ones in there too. It’s not like everyone was dying for Mr. Mime.

Thomas Robinson Jokes For Everybody!

is going to eat faces 2night

say it to his face

Where's Your Face when you need him?

in the mirror, staring back at ur face

No his face stinks he just ate poo

THE WINNER FROM THE GAMETHREAD*