The Downbeat # 1180: The Evening Edition

It's late but its here.

Share All sharing options for: The Downbeat # 1180: The Evening Edition

Sorry this is late getting out. We always have a nice schedule with the downbeat but our writer today is MIA. So lets get started!

Shouts of joy were heard throughout the Jazz alliance last night. (some of us on twitter think #JazzNation is dumb and overused with every sports team using nation so @jasonforthelove came up with #JazzAlliance.. which was highly supported by me and @UGottaLovItBaby)

The timing of the news couldn't have been more perfect after we all were less than happy with the one starter who scored 2 points last night in 27 minutes.

And I think we can all agree with this

Best Execution: 2:22 4th-Qtr – High screen-roll with Hayward and Favors. Favors rolled down the middle and Antawn Jamison rotated up to cut off Favors’ drive. Favors made an excellent dump-down pass to Kanter who scored at the rim while also being fouled. Favors was an an effective stationary passer last season but this pass on the move was a primary source of turnovers for him. Malone and Boozer were outstanding at it and when executed properly is another example how a well-executed pick&roll can produce beautiful basketball.

Best Jazzbasketball Play: 9:06 2nd-Qtr – Utah quickly got setup and into their flex offense, with Mike Harris passing from the high-post (right elbow) to a back-cutting Alec Burks for a layup.

2. There’s a very good chance Tinsley can help the Jazz on the court while Trey Burke is out. John Lucas III has been hot-and-cold offensively and hasn’t been particularly strong orchestrating the offense. Tinsley is the quintessential veteran pass-first point guard who can at the very least come off the bench and stabilize a 2nd-unit that often struggles to score. If he starts, he may struggle defensively but he’ll take some of the pressure off Hayward to make a play every time the shotclock is winding down.Bottom line: Jamaal Tinsley makes the Jazz a better team. 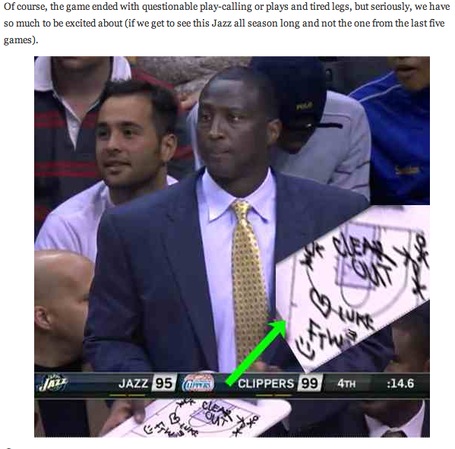 Photo is property of www.jazzfanatical.wordpress.com

Andy Larsen of Salt City Hoops participated in Round-robin with some bloggers and writers at ESPN looking at the 2013-2014 Utah Jazz. They look at five questions surrounding the Jazz. The question that intrested me most was "What's one bold prediction about the Jazz"

Arnovitz: Tyrone Corbin won't last the season. Scanning the list of head coaches on the Seat of Heat his season and Corbin's name jumps out as a potential casualty. Folks around the league feel that Alex Jensen will be manning the sidelines within a couple of seasons. Jerry Sloan is oft-mentioned to return for a last hurrah and Corbin, while solid in the player development department, has endured a rocky ride during his tenure.

And Andy also talked about Ty in his bold prediction but gave the complete opposite statement re: Ty.

Larsen: Many are predicting Ty Corbin to be the first NBA coach to be fired, but I think he stays the whole season. Utah hasn't fired a coach in more than 30 years, and GM Dennis Lindsey asserts that the team isn't going to be judged on its win-loss total. There could be much losing, but it won't mean Corbin's cut.

Overall its an interesting read. Its clear which writers know about and really follow the Jazz compared to the generic questions and answers from those who don't. Check it out.

Yesterday our friend Jody Genessy wrote a nice article on Marvin Williams. I have always had an irrational love for Marvin (since he joined the Jazz) I have always wanted him to succeed and think he could in a motion offense that doesn't center around Alfense.... so this could be his year.

Jody talks to Marvin about his rehab process and how the injury negatively impacted his play last season.

"It’s always tough to watch, especially when you’re kind of in the dog days of the season, training camp. You kind of want to suffer with your teammates," Williams said.

"You want to be there for them. I try to get out there and do as much as I can, whether it’s non-contact or some of the conditioning stuff, just to let them know I’m still here trying to support them."

Looking back, Williams said the injury hampered his play "a great deal" in the second half of the 2012-13 season, the roughest of his eight-year career.

"It was very difficult to plant and cut and jump. I felt like I got to the league doing that," he said. "When I couldn’t do that last season, it really affected my game. Hopefully, this year I got it taken care of and I’ll be back to normal."