[Ed. Note from Amar: This should not be news, but it's a social media event that is being discussed and it would be poor on our part not to at least touch upon it. If the Celtics did this, their blog would have to talk about it. If the Lakers did this, same thing. The Miami Heat? Of course it's noteworthy. In an effort to give Jazz fans news on what's happening with the Jazz this post happened. Not saying something about this event would in itself be saying something, perhaps something quite the opposite of how we actually feel.

I wish to congratulate the Utah Jazz for quickly, and respectfully, resolving this issue in a matter of minutes. The offensive material was deleted and a sincere apology was made. I think their efforts to support fans, communicate with fans, and be respectful to all fans needs to be discussed. I appreciate this organization, we all do; and this post serves to document their quick response and dedication to doing what is right.

For archival purposes, the following post has not been edited. While I had no part in writing this post, it is my duty to support the work of those who write for this blog, regardless if I agree or disagree with them. And it is also my duty to help provide information to the Jazz fans about what the team does. This is, in my mind, a non-story. And the season is starting, so Go Jazz!]

It's Halloween season.  People dress up.  A lot of times those people dress up as their idols or their heroes.  They dress up as zombies.  Unfortunately every so often people wear blackface.  No matter how harmless it isn't harmless. 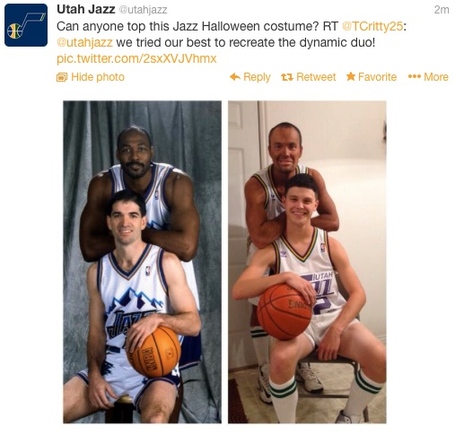 I know some of those reading this may see it as a couple of boys naively replicating their heroes.  That may be true.  But this comes to educating.  These kids hit up a huge dance party in Utah.  The fact that they could rock out like this and not get pulled to the side by someone blows my mind.  There's a reason blackface is offensive.  Most don't know why.  Most believe it's because you're dressing as someone black.  Nope.  Let me spend some time to educate you.

Since most of you use wikipedia, let me show you what's available for your own education by a quick google search.

Blackface as define by wikipedia is:

A form of theatrical makeup used in minstrel shows, and later vaudeville, in which performers create a stereotyped caricature of a black person. The practice gained popularity during the 19th century and contributed to the proliferation of stereotypes such as the "happy-go-lucky darky on the plantation" or the "dandified coon".[1]

In 1848, blackface minstrel shows were an American national art of the time, translating formal art such as opera into popular terms for a general audience.[2] Early in the 20th century, blackface branched off from the minstrel show and became a form in its own right, until it ended in the United States with the U.S. Civil Rights Movement of the 1960s.[3]

We apologize for the last retweet/tweet moments ago, we have taken it down as it may be insensitive.