The Downbeat #1183 - The Kid is Alright Edition

Share All sharing options for: The Downbeat #1183 - The Kid is Alright Edition

Yesterday I had lunch with the venerable Andy from Salt City Hoops (and SLC Dunk Alum). We were discussing the team (duh) and I brought up the topic of next year's draft and BPA (best player available). My question was if he thought the Jazz would take Marcus Smart or Dante Exum if they were the best player available. Exum makes sense because he is 6'6" and could work in a combo guard lineup, but what about Smart? This naturally led to discussion of Trey Burke.

Andy indicated that he is not yet sold on Burke (many aren't), and my question was what is the cause for concern? It seems to me that the majority of misgivings about Burke surround two things: His shooting and his ability to defend.

Certainly his ability to defend (especially the pick and roll) will be a sticking point. The first thing to remember is that there are very few players that jump right into the league and already understand the finer points of NBA pick and roll defense. Its complex. It requires experience to see how a play is developing and make the proper adjustments to defend. Advanced stats aren't readily available for preseason (NBA.com and Basketball Reference yield 0 hits when you search 'Trey Burke') so its nearly impossible to make any prediction about where he stands on this aspect of his game. The only way to gauge would be the "eye test" by re-watching games, but then he only played in a couple of them.

Shooting is a different story.

We often times expect too much of a player when they are highly touted out of college. I don't think that there is much of an argument that Burke doesn't have a feel for the game. He has shown that he has the ability to direct the team (albeit in preseason, and in simple situations), and he certainly showed that he has the "floor general" chops in is time at the collegiate level. This led me to propose the question to Andy: Which player has that true point guard ability/mentality and can shoot at a high level? John Stockton? Isiah Thomas? The real answer is that there's not many of them. Rondo led the league in assists last year and though he shot an admirable 48%, he only shot 27% on shots that weren't at the rim. This is true up and down the league. Conjure up a list of the best passing point guards in the league. Now, think which of them have a reputation of being a good shooter. Who pops up? Chris Paul is all that comes to mind. Deron used to have that rep, but he has been terrible with the Nets. 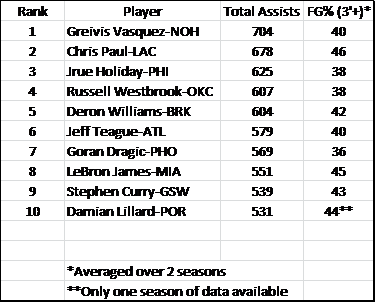 If you are one of the ones giving Trey a pass on his shooting prowess, you probably already know that Lebron is the second best Point Guard in the league.

In a very different outcome, the guys at CBS Sports almost unanimously think Ben McLemore will be the RoY

Richard Deitch of SI held a fantastic Roundtable discussion of the NBA's national analysts (think TNT, ESPN/ABC). I recommend everyone check it out. There are some good points made, but most of all it shows how well the NBA does with its personalities. Yes there are ones that we can't stand (Reggie Miller, Shaq), but there are also some real gems (Mike Breen, EJ, Doris Burke, Kevin Harlan).

One thing that I am holding out hope for (not holding my breath, though) is for an option of a secondary audio tracks that is just court sounds. I would pay extra to listen to an audio feed that consists of nothing but a mix of microphones around the court. I want to hear every "screen" call out, every shoe squeak, every f-bomb. Just pure, unedited game noise.