N.B. THIS IS NOT A REAL NEWS STORY. THE TWEET IS REAL, BUT SPECULATION UPON CORBIN'S ROTATION. I JUST RAN WITH THIS. THIS IS THE LUGUBRIOUS PHOTOSHOP OF A HYPOTHETICAL SITUATION. DO NOT CAUSE ANY ALARM.

It's just the beginning of training camp and there are more questions than answers in the Utah Jazz camp. One of the "no brainers" should be the question of who should start at point guard for the team. After all, the Jazz made an aggressive move on draft night to trade up to pick Michigan Wolverines point guard Trey Burke. Burke finished his sophomore season in Ann Arbor with averages of 18.6 ppg, 6.7 apg, 3.2 rpg, 1.6 spg, and shot 38.4% from downtown. Oh, and he also led his squad to the National Championship game based upon his big play ability. For his efforts, the former Big Ten freshman of the year (2012) became the Big Ten player of the year (2013), the National Player of the Year (2013) (AP, NABC, Naismith, Robertson, SI, and Wooden), was the Most Outstanding Player of his region in the NCAA tournament, was a consensus All-American First team -- and just won the Bob Freaking Cousy Award for best point guard in the nation.

It's a no brainer that Trey should start. So, of course, subtext aside, we find our head coach Tyrone Corbin suggesting that he just may start John Lucas III instead.

Also the possibility that Lucas gets early nod over Burke to bring him along slowly.

To his defense, Bill Oram (@TribJazz) offers up the possibility that Ty wouldn't want to put Trey in a position to fail. That's nice, and sweet, and kind of Ty. But let's flip the script here and recognize that this is, in my opinion, the wrong attitude to have. Let's give Trey the minutes so that he's actually in a position to SUCCEED.

Not every player has to intern for four years under overpaid players with more flaws than All-Star game votes. Sometimes a young hot shot can learn faster through their own personal experiences. I fell off the bike when I was a kid learning how to ride. But I got up, and eventually learned how to do it. I didn't spend three years watching other kids ride, without the fear of failure or responsibility to perform. 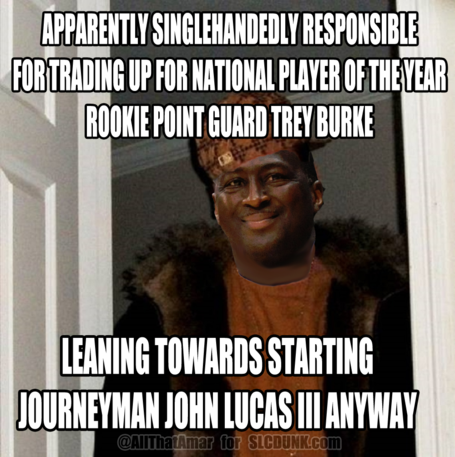 But again, it's nice to see how many no-brainers our head coach can be absolved from, I can't wait to see how the media that's owned by the LHM Group of Companies explains this if it really happens.