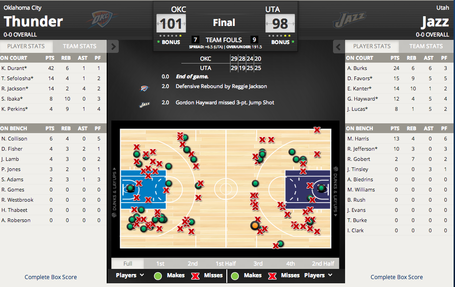 The new look Jazz gave the fans exactly what they have been clamoring for over the past two years. Team basketball. The Jazz passed the ball okay last night, but had a lot of turnovers and their shot selection was fair to poor in the second half. The team finished with 25 assists on 36 baskets. Gobert showed more of his length and our bigs matched up well against Ibaka, Perkins, and Collins. Durant did his damage from the FT line going 22 of 24.

At the 2:12 mark in the 2nd quarter the game was close at 47-45 OKC. We didn't close out the half very well at all. This will be reoccurring problem throughout the year. The third quarter started right where the second half ended, with the Thunder taking advantage of Jazz turnovers. The lead quickly ballooned to 15. The second team lead by Harris and Burks cut the OKC lead to eight by the end of the 3rd Quarter. Midway through the fourth the Jazz went on a 16-6 run over a seven minute period pulling to within one, 90-89 with 4:16 left in the game. The Jazz had multiple chances to take the lead late, but couldn't convert on some wide open jumpers and missed some critical free throws. Despite all of this, the Jazz had the final possession with the opportunity to tie the game with 6.4 seconds left. Hayward rimmed out a three at the buzzer.

Michael Harris- He was not even supposed to make the roster. He could very likely be this year's DeMarre Carroll. He understands that he has been given a chance, and is taking full advantage when he gets on the court.

Richard Jefferson's Contribution. I will admit I was one of the people that ho humed the trade and assumed that Jefferson was just a through in. Jefferson finished in double figures and three rebounds. Which is not bad for a throw in player.

Fighting Back- The Jazz could have easily let the game be over when they were down 15 points. Instead of rolling over, they fought back to give themselves a chance to win the game.

Closing out Quarters. The end of the second quarter was not strong. The offense went stagnant, and the Jazz did not run their sets.

Turnovers were an issue some were forced, but many were unforced.

Offensive Fouls- Our bigs are going to have to adjust to double teams and players that know how to bait the offensive o fouls.

Stat of the Night

Play of the Game