The Shoutout to Ronnie Brewer Edition - The Downbeat - #1162

Can rookies play in the NBA? Who knew bare feet could instigate a ban? Achieving game speed in practices and more

Share All sharing options for: The Shoutout to Ronnie Brewer Edition - The Downbeat - #1162

Note: A big thank you to all the contributors here at SLC Dunk who have pitched in while I've been on hiatus here this summer.

What does the head coach of an NBA franchise want to see from his team during training camp? In Ty Corbin's case, it's this:

This is just something that made me smile. A friend who's a Rockets fan sent this to me: "saw a vid last week of the press grilling omer asik about his trade demands and stuff and he refused to confirm or deny anything. then [Ronnie] brewer came by, made a joke about their time in chicago and kinda defused the tension haha. good job, ronnie!" Start watching at around the :25 mark. Best of luck to Ronnie B (he will forever be "Ronnie B" to me) in Houston. 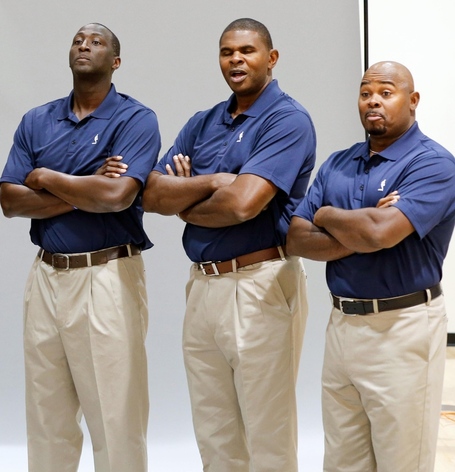 Agree or disagree with Kevin O'Connor's assertion that newly drafted players are simply not ready to play in the NBA?

This should be the year that Derrick Favors graduated from college, and should be entering the pros. You know, so what has happened, going back to Michael Jordan playing three years and Tim Duncan playing four years, to Grant Hill, we’ve, you know, i–put the process in overdrive, and the players that are coming into the league really aren’t ready to play NBA basketball. Their talent level dictates that they have to be drafted where they are and that they should be very good players in a few years, but the painful way of going through it is difficult first. And then, you can learn really bad habits. You know, I got–IGM–I got mine. So, hopefully that’s not happened with some of the young players.

Have we talked about NBA nickname jerseys yet? (Here are some suggestions from SB Nation.) I kind of wish they had launched this idea earlier or will do some Hardwood Classic versions for retired players. I'd love to add a "Mailman" or an "AK-47" to my collection. What would you like to see our current players sporting? Would you buy a "G-Time" jersey? How about a "Sexual"? HOW HILARIOUS WOULD THIS BE?

(Trey is a nickname, so I thought I'd use his real name, Alfonso. Yes, we have an Al Burks and an Al Burke on the team.) Before I end today's Downbeat, I'd like to throw out a little plug for the new endeavor of your and my favorite Jazz beat writer, jodygenessey.com. Jody is a great writer whose humor shines through in his posts, and I highly recommend a visit to his new site (even if KSL has an organization-wide ban on the site probably due to a picture of Jody's bare feet).