Jazz had an early 10 point lead and let the Nuggets take control in the second quarter going into the half down by one 46-45. The Denver Nuggets came out in the second half with five quick points to push the lead to 6, but Derrick Favors kept the Utah Jazz close (70-68) scoring 11 of his 21 in the third quarter.   Jazz hit the bonus with 10:18 left in the fourth quarter, but didn't take advantage. Alec Burks gave the Jazz the lead on a nifty left handed layup and one 73-72, however the Nuggets wouldn't roll over.  Andre Miller dusted of the long ball, and Faried had emphatic dunk to push the lead to six a the 8:11 mark. The Jazz had some untimely turnovers, missed some defensive assignments late in the fourth, and only scored 13 point in the fourth. Final score Denver 100 UTah 81

Hayward's frustration turning into on court production. I say this is a positive thing because Hayward is using the losses to motivate himself (and hopefully the guys) to win their first game of the season. He cooled off in the second half which was a little bit frustrating.

Gobert's length against the Nuggets, specifically Mozgov, was good to see. He played a significant role in the comeback and had some meaningful minutes and free throws in the fourth quarter. He still has a long way to go, but his presence was felt tonight.

Favors was pretty aggressive tonight finishing with 21-13 and went 5-8 from the line.

Rebounding.  It seemed to me that Favors and Kanter struggled with the quickness of Faried, Hickson, and Randolph. They play better against more physical bigs.

Assists. The spacing was much better this game, but it didn't seem like they hit their sets or the timing was off all game. 11 assists on 31 baskets.

Play of the Game

I don't like to give the other team credit, but credit is given where it is due. This could be a dunk of the year. 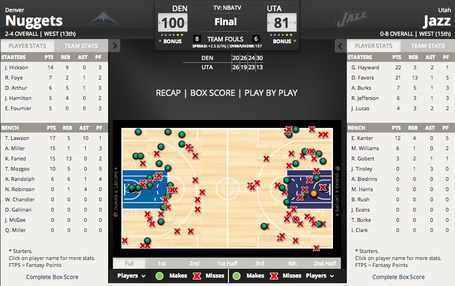