It's all part of the plan.

Share All sharing options for: The Downbeat #1196: Tank You Very Much

Amar recently illustrated why he's not worried about the Utah Jazz's 0-8 start. Let me add my two cents into this discussion as well. The Utah Jazz have the NBA right where they want them. Let me explain why.

Let it be known that Gordon Hayward takes a while to "heat up" during a season. It's only November and he's averaging career highs in a lot of categories. Gordon Hayward usually starts off slow from 3 point range and picks up in subsequent months. Remember his nearly 50% from three January from last season?

The Jazz's major weakness right now is the point guard position. The plan never was to play John Lucas III nor Jamaal Tinsley heavy minutes. If it was then Ty Corbin really is throwing in the towel as a coach. Trey Burke just was re-evaluated and he is able to participate in limited physical activity in practice now. In a few more weeks he'll be able to take the floor. As fans we were slightly worried about Trey's possible minute distribution, but, now, after seeing the hot mess of John Lucas III and Jamaal Tinsley we can rest assured that Trey Burke will see a lot of minutes. By the time Trey comes back he will be thrown into a lot of action. He'll get his lumps early and often, but he'll be able to learn early and often.

Another reason the Utah Jazz haven't sought out any long term point guard contracts goes by the name of Raul Neto. How quickly we have forgotten about our Brazilian heartthrob. Trey Burke will gain one year of experience and Raul Neto will be able to join him and learn as a backup without the Jazz having to bring along two rookie point guards in new roles at the same time. (Though it could be argued how much worse could the Jazz currently be?) But as Amar pointed out in his post, we should all be happy right now. The Jazz are focused on development for the first time in ever. Development is painful. Right now Trey doesn't have to look over his shoulder and wonder if another point guard is taking his job and rush his way to the court. He can watch these games, learn from the mistakes of the current PGs, and have the game slow down for him before he even touches the court. He also can know that whatever he does on the court will be infinitely better than whatsoever his backups are capable of doing. He's able to learn. That's important.

So with those two items out of the way the Jazz are still 0-8. But 0-8 gives you precious things. Such as draft picks. The bench is a flaming dumpster fire. We all know that. The Jazz know that. The league knows that. The Jazz will have 3 draft picks in the top 31 picks next year if current trends play out. That #31 pick could be the most valuable as teams are trying to catch 1st round talent that fell out of the draft and get them on non-guaranteed contracts. Do the Jazz want 4 rookies next year including Neto? Most likely not. But they will want valuable assets that people want. Teams will buy high on that #31 pick because of the ability to have a talented but possibly troubled rookie on a non-guaranteed contract.

In addition, the bench will be able to be upgraded in a hurry. The Jazz will have a slew of strong assets heading into the draft. With just the Jazz's selections in the 1st round they will be able to reinforce their starting lineup with high impact talent for years to come (Randle, Exum, Parker, Wiggins, Smart, etc) and be able to move developed talent (Trey Burke, Alec Burks, Gordon Hayward, Enes Kanter, Derrick Favors) around their roster or to other rosters through trade to build the championship team that Dennis Lindsey has made a goal of creating. Let us all remember the goal of Dennis Lindsey is not to make the Core Four successful. It's to make the Utah Jazz a championship team through whatever means necessary. The Jazz will have a lot of assets to make a lot of moves in next year's offseason and draft. This will be one heck of a ride.

Tonight is the Champ Classic in Chicago featuring college teams Michigan State, Duke, Kentucky, and Kansas. The next time this much draft talent floods into Chicago there will be an NBA Draft Combine and even then not as many players will actually participate in drills. This will be a sight to behold. Here is a list of all the players projected in the 1st round who will be there:

Yeah ... that's a lot of talent. The games start tonight at 7:30 EST with Kentucky vs Michigan State then 9:30 EST with Duke vs Kansas. There's a very strong chance that one of the guys you watch tonight will be wearing a Jazz jersey next season. Exciting stuff.

Get used to seeing this Jazz fans:

The Utah Jazz: Winless under the Wasatch Range is no way to start a season. The Jazz lost to the Nuggets 100-81 on Monday, leaving them at 0-8 on the season. Utah's next five include two games apiece against the Hornets [Pelicans] and Warriors, along with one game against the Spurs. This team could very well be headed to 0-13. 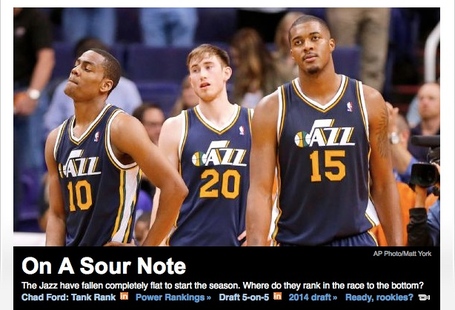 Also there will be a lot of these:

Let's leave on a good note, shall we? The present of the Jazz isn't good. But it was be design. This isn't like past seasons where fans were told that they had a playoff team and they obviously didn't. We knew this would happen, we were told this would happen, and now it is happening. It all is according to the plan.