Utah Jazz looking to fight hard for first win of the season, attempt #9

Share All sharing options for: Utah Jazz looking to fight hard for first win of the season, attempt #9

The Utah Jazz are hurting bad and need a win. Any win. A home win is most likely. And if you look at the schedule, it looks like it's either tonight or against the Phoenix Suns around the end of this month. Yikes. 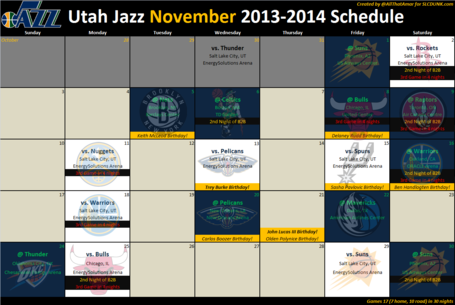 Well, the Jazz recently made a roster move to cut Jamaal Tinsley and sign Diante Garrett. So that will finally solve what's ailing us. On the other side of things the New Orleans Pelicans are aiming for a playoff spot, and have played pretty well so far. Obviously Anthony Davis is a huge part of things (21 ppg, 11 rpg, 3 bpg, 2 spg, 2 apg), but I think the wind under the wings of that giant bird come from their trio of Jrue Holiday, Eric Gordon, and Tyreke Evans. It sucks because Jrue, Eric, and Tyreke have all beaten the Jazz as individuals before (Gordon with the Clippers, Evans with the Kings, and Holiday with the Sixers). Tonight they form a pretty tough team that we may just be barely healthy enough to contend with on the wing.

The Jazz are hurt, at home, and hungry. A Jerry Sloan Jazz team would have the edge here. I really don't want to say more than that.