The Utah Jazz held it together and won a game, our first game of the season! While the Pelicans led after the first quarter by 7 points, and pushed the lead in the second quarter our team did not give up. The largest fact in my opinion was Tyrone Corbin going with an actual point guard, Diante Garrett the NBA-DL callup, for 22 minutes in his first game with the team. Furthermore, John Lucas III (who started this game) was benched at halftime and did not play at all in the second half.

And what a second half it was! The Jazz managed to win a third quarter, 28-22, and the Pelican lead was cut to just 5 points. Richard Jefferson and Marvin Williams were big in the third, as well as Enes Kanter who was getting rebounds all game long. In fact you could say Jefferson was the main man during our run with good defense, smart shooting, and effective passing. The Jazz could have cut the lead to 3 points, but Alec Burks missed a buzzer beating dunk.

Eventually the Jazz kept finding their stroke from deep (going 9/22, 40.9%), as Marvin and Richard kept making shots when we needed them to. Utah got some stops, and won the game 111-105. Diante Garrett in his first NBA game for the Jazz finished with 7 pts, 5 ast (4 tov tho), and played like a real point guard. He's our Pinocchio, a real boy, in this case. But a real point guard. 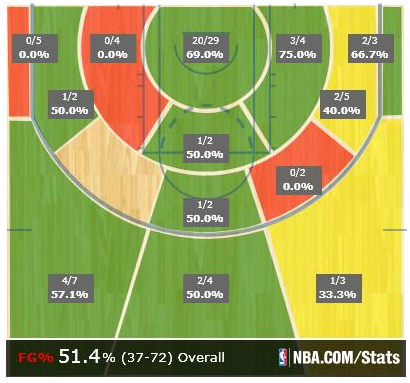 And here was our season's shot shart before this game: 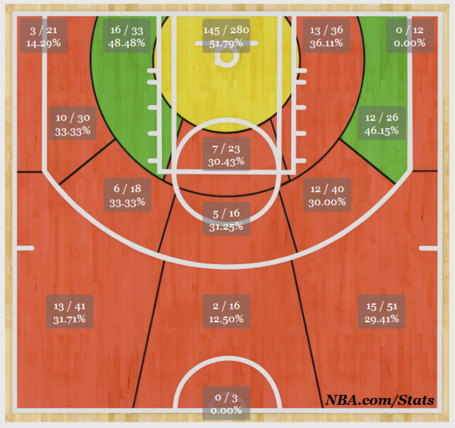 Congrats again to the Jazz, and to the coaching staff to recognize that when an older player plays poorly, he does not have to play the entire game.