They may have four rings, but we have Dennis Lindsey and R-Jefferson!

Oh man, these are two teams going in different directions. The Spurs are the best team in the Western Conference, and the Jazz, well, the Jazz are last. They're 8-1, and we're 1-8. The disparities continue when you look at the two teams and how they have performed over the last 5 games. 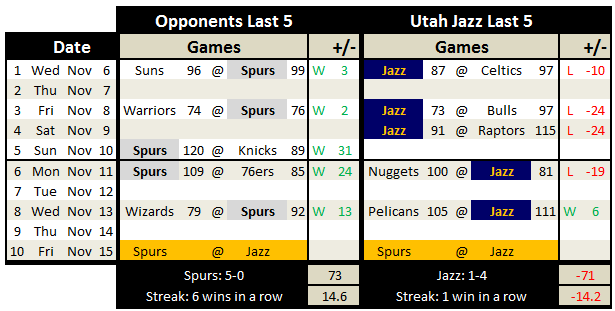 So the Spurs are winning ALL of their games, and winning by an average margin of victory of +14.6 points per game. The Jazz have won only once, and our margin of defeat is -14.2 ppg. We've finally won a game, and they are looking to extend their winning streak to a lucky number seven. It wasn't always like this, Jazz fans. Before we were the top dog. Looong ago . . .

Recent history isn't so hot, as the Jazz are 2-13 over the last three seasons against the Spurs (including the 4 game sweep in the playoffs). Over all the Jazz are 74 and 92 against the Spurs in the history of both franchises, but the Jazz have a commanding 54-28 lead when the games are played in Utah. In the games we have played over the last few years the main problems have been Tony Parker, and their ability to make threes. Tim Duncan is no longer a major threat, but hey, he's still better than any of our players.

That's not really saying much because either our major players this season have been a) too green because of under-use over their NBA careers, or b) injured, or c) both. Take a look at the injury reports for this game:

Yeah, all they are missing is Matt Bonner, who granted, is likely to score 18 points against the Jazz on any given night. But on our side of the court we're going to be missing a few rotation players still -- and we may ALSO be missing Gordon Hayward. Yikes. Life doesn't get easier for our club, it seems.

San Antonio is playing very well right now, and that's to be expected of them. After all, they made the NBA Finals last year and were a Ray Allen jumper in Game 6 away from winning it as the road team. This season the team is playing at a medium pace, 94.9 possessions per game, which is good enough for 14th in the league. Their offense, which was stellar last year, is pretty hum-drum is you just look at the raw numbers. They *only* score 99.4 ppg (15th in the NBA); but their offensive rating is 12th best in the NBA, gaining 104.8 points per 100.0 possessions. The Spurs this year are really locking teams down with defense. They are 2nd best in opponents points per game (90.1 ppg), and 2nd best in opponents points per 100 possessions (95.0 / 100.0). What factors are in the Spurs corner? There's the best team in the NBA at snaring up defensive rebounds (1st in DREB%, getting 79.9% of all opponent misses), and very rarely send other teams to the line (2nd in FT/FGA ratio for the other team, giving up only .148 free throw attempts per field goal attempt). San Anotnio also makes sure that when you do take a shot, it's a hard shot. They're 7th best in opponents eFG% (46.7 eFG%).

They're not just about defense, they are still one of the most efficient offensive teams around, being #4 in eFG% (52.4 eFG%), and they rarely turn the ball over. San Antonio isn't with faults though, they suck at getting to the line (last in the NBA), and very rarely get their own miss (28th in offensive rebounding).

So they basically play like a vet club that doesn't make mistakes, and doesn't lose because they hurt themselves.

So far this season the Jazz have been getting all kinds of blown out. While the Spurs win close games against playoff teams. It's no surprise to see why the records are like they are.

Their team has a number of first ballot Hall of Famers on it, and a bunch of role players performing at a high level. The Jazz have players who, for the most part, are playing worse than they should be playing. Take a look at the Top 10 players on both rosters:

Yeah, If you do isolate things Gordon is playing very well, but he's not getting much help from anyone not named Denes Kavors. For example, we have a dude playing 26.8 mpg who has a PER of 4.1, and that's recently 4.1, it used to be a negative number. Hopefully with Diante (Captain Sample Size) we'll have to play Lucas a little less. Just by looking at these numbers you see how valuable Hayward is to our team. The Spurs are capable of rolling right along with injuries. That reminds me of how the Finals Era Jazz teams would still win games when Malone would get a 1 game suspension for injuring some random defender. 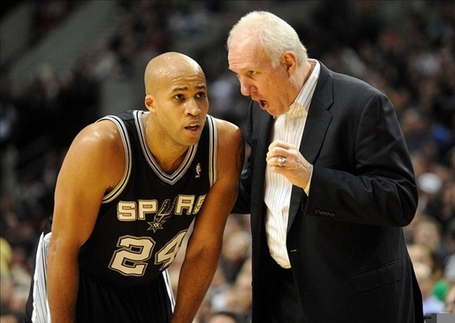 We're the worse team. We have more injuries. Both teams are just as rested as one another. They are the best team in the conference, and we're the worst. Oh yeah, and they have Gregg Popovich on their side. As much as the media (or Jefferson) wants to sell me Tyrone Corbin like he's a can't miss mutual fund, I'm giving the over all edge to the Spurs. We're at home, but the Spurs win this game.

Unless John and Karl suit up.

But that's not happening.